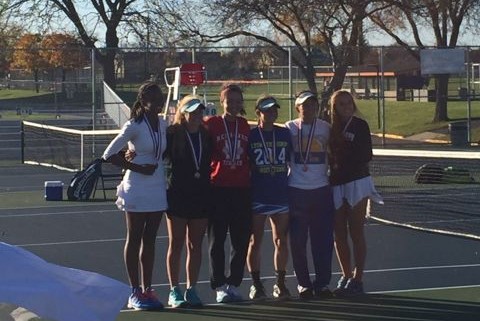 After a full season of practices and matches, 128 singles and doubles girls tennis players from around Illinois competed in the IHSA state tournament this past weekend at Buffalo Grove High School.

This year, sending only one doubles team and one singles player, the Redhawks placed sixth, one spot behind last year’s fifth place finish.

“The competition was very tough this year,” Chen said. “I won some really tough matches when I was behind, so I’m pretty happy with how I finished.”

On the doubles side, senior Cass Goldner and junior Hannah Swarm played together despite not having enough practice. Goldner had been sidelined for most of season due to a right shoulder injury and played  her first match of the season at Sectionals, while Swarm battled her own meniscus injury coming into the season.

At Sectionals, Goldner and Swarm surpassed other teams, in spite of Goldner serving all under-hand serves. At state, the doubles team looked to continue with their success. After winning their first three rounds, the girls lost their fourth round match against Glenbrook North, finishing in the top 16 in the state.