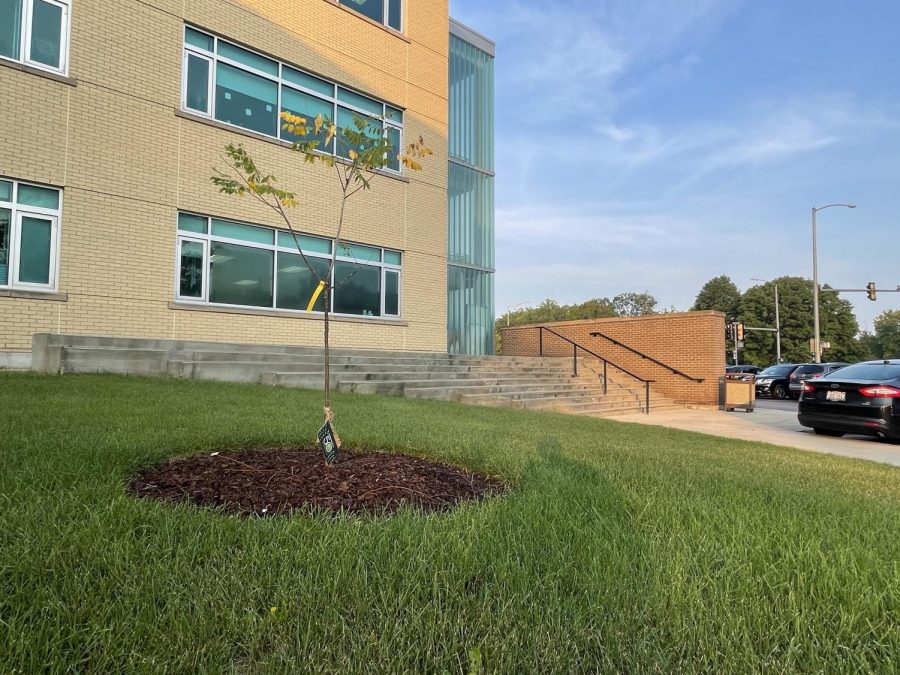 The tree that was gifted to Naperville Central High School by District 203 as part of the "Partners in Growth" motto is planted outside of door two.

The phrase “Partners in Growth” is now plastered on every building in District 203. This new district motto arose from numerous surveys of students, parents and community members in an attempt to determine what mattered most to the community.

“We didn’t want to come up with it on our own as a communications department,” said Alex Mayster, District 203 Executive Director of Communications.  “We wanted the community to come up with it together. We got a ton of responses [to our survey]. We combed through it and found a bunch of words that kept popping up, and those words were ‘partners’ and ‘growth.’”

The district then assembled several focus groups of community members who were asked to elaborate on their survey responses in depth in order for the district to determine what motto would best fit the district.

“We wanted to do it in an authentic way where people will really buy in and feel like they’re a part of it,” Mayster said. “We didn’t want [something that was] just a slogan where people would roll their eyes or not care.”

Ultimately, “Partners in Growth” was landed on in order to illustrate two ideas:

The word “partner” in the new motto is intended to illustrate the cooperation between students, staff, the district and the community.

“I think the idea is great,” said Katherine Seguino, a science teacher at Naperville Central. “Children and parents and teachers should all be working together.”

Seguino, like most staff members and students interviewed for this story, expressed initial confusion as to what the motto was.

“I don’t know if it’s meant to be globally focused, or focused on ‘boots on the ground,’” Seguino said.

Junior Connie Chen feels that teachers “partner” with their students by making sure students understand and are comfortable with their course’s content.

“For the most part, I think all staff and teachers are really helpful and willing to help students on their own time, or give them extra help,” Chen said.

Not all students agree, however.

“[The teachers] could definitely do better,” junior Zoe Filut said.

The district chose to focus on growth over other terms like success or achievement, in part due to the fact that not every student reaches the same heights.

“Anyone can grow, right?” Mayster said. “No matter where you are, you’re not trying to get from the bottom to the top, you’re just looking to grow. So we liked growth, because of the opportunity that everyone has to grow.”

There are multiple ways in which an individual can grow.

“The district makes sure we have the lesson plans we need to grow as humans, and then the social-emotional stuff that helps you grow as a person,” senior Faythe Nystrom said.

The district also sent trees to each school as a part of the slogan.

“We wanted to have something you can touch, something that was in front of people,” Mayster said. “We just kept finding all of these similarities between growing plants and growing students- plants need light, warmth, love and care. As that kept coming up, it felt natural to give trees to the schools.”