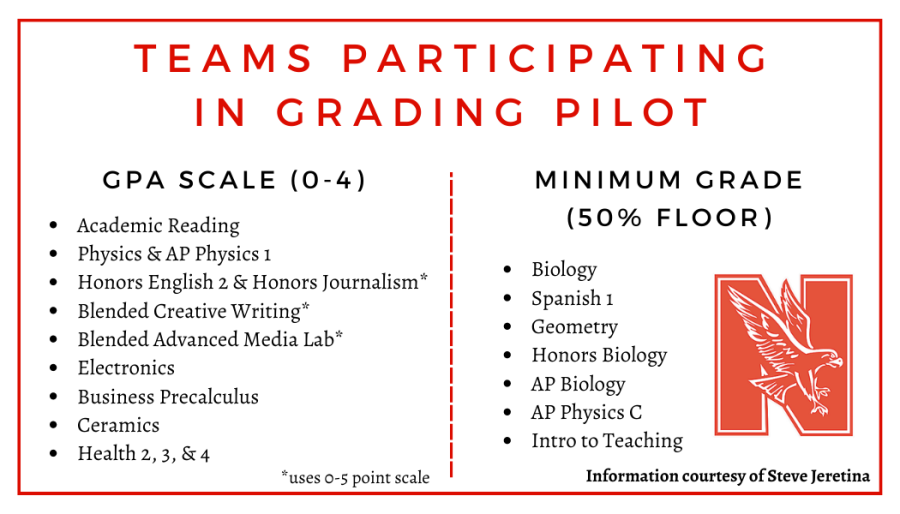 Naperville Central is implementing a schoolwide opt-in grading system pilot for the 2022-2023 school year. The pilot offers teachers the choice of one or both of two grading options: the “GPA” scale, in which teachers will evaluate students on a 0-4 scale, and the “minimum grade” scale, where the floor for assignments is 50%.

“I think it’s something that we would have seen had people remained in the positions that they were in,” Jeretina said. “We’re trying to ensure that grades are the absolute most accurate reflection of what a student knows and is able to do. And I think these models are really trying to get us to that point.”

The pilot is completely optional for teams to opt into, Jeretina said. Teams, as opposed to departments like science or social studies, are groups of classes under the same name, such as Honors English II. Currently, 17 out of more than 60 teams are participating in the pilot.

Teams using a 0-4 rubric can choose how they convert it to a percentage.

“We’re allowing teams to have a little flexibility to establish those guidelines,” Jeretina said. “It’s very easy for classes in some departments to make that transition to a zero to four because it aligns to different levels of performance.”

Ceramics 2, 3 and 4 are such examples of classes that can adjust to the 0-4 scale easier because they already use a rubric system. The ceramics classes are planning to implement the new system for second semester.

“Standards-based grading works well in a subjective subject like art,” said Rebecca Mancuso, fine arts department chair and ceramics teacher. “It makes sense for students to not focus so heavily on a percentage and more just paying attention to their mastery of a standard.”

The Intro to Teaching team has used the 50% minimum since spring 2021, being one of two teams to have used either system before this year. Lynn Andrees, CTE department chair and Intro to Teaching instructor, said she welcomes the pilot.

“[The traditional grading system] is very bottom heavy,” Andrees said. “When a student gets a zero, it makes it very difficult for them to get out of that zero.”

If each letter grade was a nine percent range, “F should be 59% to 50%,” she said. By using a 50% minimum grading scale, Andrees said students are given the hope to recover.

The pilot’s intended purpose is to streamline grading practices across the school.

“We want to make sure that grades are mathematically sound,” Jeretina said. “Regardless of which teacher you go to for a particular class, [we want them] to view what success is or progress is in a very similar way. It’s very hard for some teams to be 100% on the same page, because grading is inherently subjective. We’re just trying to close that gap to make this as objective as we possibly can.”

Jeretina said the pilot is looking for ways to adapt to the needs of Central students and staff.

“I’m all ears,” he said. “We just want to really get a pulse as to what the student experience is. We’re going to be working with teachers and getting student feedback as the year progresses.”