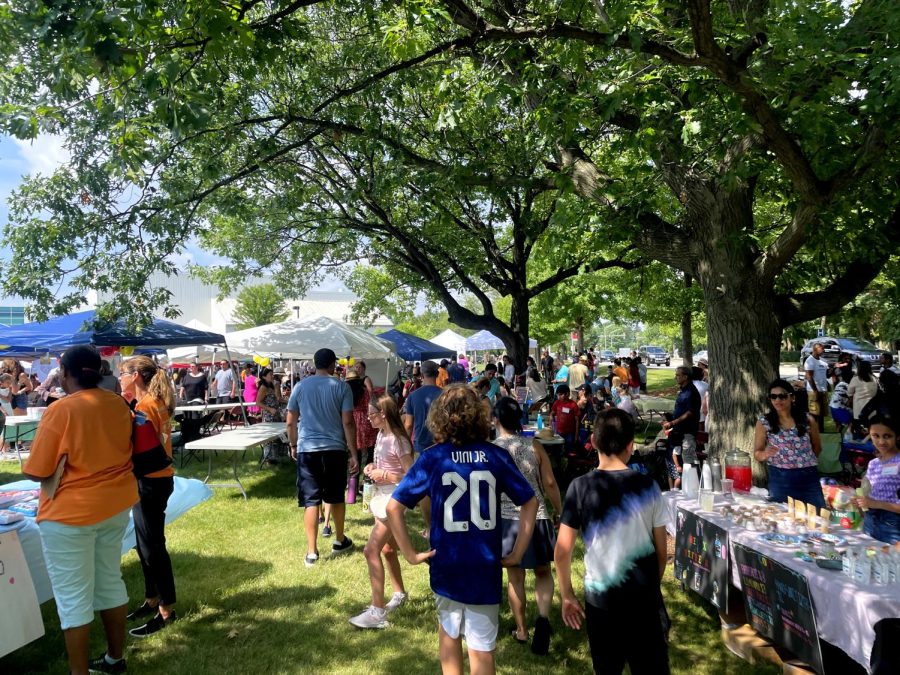 Customers walk the aisles of the Naperville Children's Business Fair.

A committee of seven high school students planned and ran the fair, including Central senior Mark Park, the committee’s Co-Head of Finance.

“[The fair] provides an outlet for [kids] to really start their business,” Park said. “I think it’s a great opportunity for them, one to make money, but also to gain that love and passion for business.”

One entrepreneur who took this opportunity was Will Lardner, an incoming freshman at Central. Lardner’s business, Will’s Crafty Creations, has sold handmade jewelry and stickers since April 2021.

“I like the feeling of having customers,” Lardner said. “Doing the stuff I love, selling [my products], and meeting new people. At the fair, I like seeing all of the other businesses that are here.”

“I feel like this is kind of a start for me,” Shah said. “I can sell my services for the first time, and really get my name out there.”

Shah’s mother, Rakhi, has supported his business from the start.

“I think it is wonderful that at such a young age he’s trying to showcase his skills,” she said. “He really enjoys music, it’s a love that he has, and I think this is taking it to the next step.”

All participants of the fair were able to showcase their businesses for free due to the roughly $1,800 dollars in sponsorships from Naperville businesses.

These sponsors were recruited by Park and other members of the committee. After a last-minute cancellation Park also served as a judge at the fair, providing advice and praise to the entrepreneurs.

The planning committee was created after the first year of the fair, which was planned almost entirely by Athena Chen, a junior at Central.

“When this started last year, Athena became a client for my marketing class,” Central business teacher Christine Bell said. “My students went out and got the sponsorships [for the fair] as a part of my course.”

Bell also helped Chen get permission to hold her fair on Central’s grounds, and set up tables at the fair.

With the help of the committee, Chen was able to make the fair larger for its second year, pull in more sponsorship money, and ultimately reach more people. One of these people was Kara Pelecky, who found the fair through Facebook.

“When my children were young, they were very entrepreneurial,” Pelecky said. “They always wanted someone to buy the things that they so furiously worked on, but there was no forum for that. [I came because] I wanted to buy what the next generation of kids were making.”

To Bell, giving kids the chance to make money isn’t all that the fair is about.

“We need entrepreneurs to keep our economy moving and buzzing,” Bell said. “It’s about sparking interest in kids at a very young age, showing them an opportunity to shape their path.”