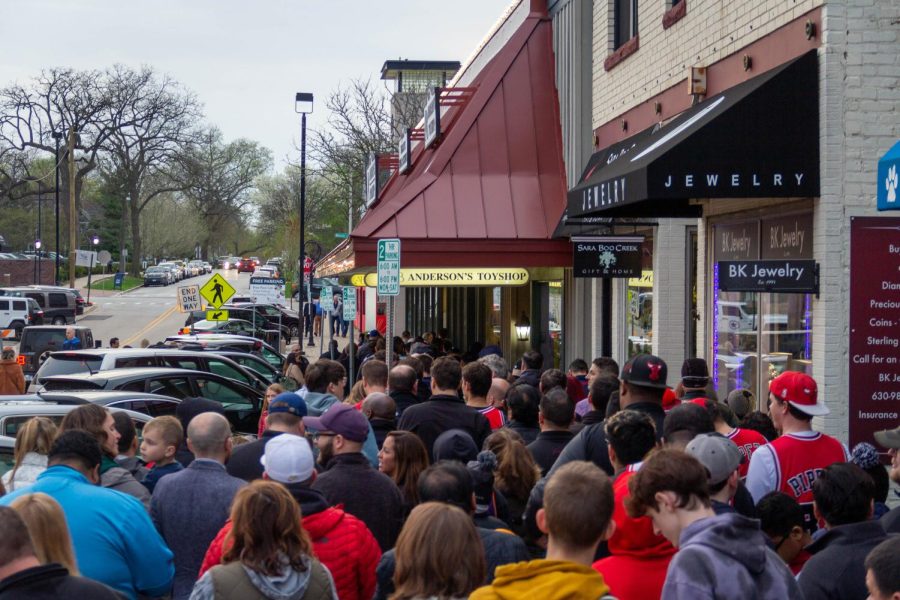 Over 1,000 people line-up outside Anderson's for a Scottie Pippen book signing on May 2.

Chicago Bulls legend Scottie Pippen held a book signing and photo op at Anderson’s Bookshop in Naperville on May 2 to promote his new memoir “Unguarded.” The event, which required pre-registration, sold out at 700 tickets.

“For the first time ever, we said one ticket could admit a whole family,” Anderson’s marketing manager Kerry Clemm said via email. “So if I had to guess, I would say about 1,200 people showed up and went through.”

Playing in the ‘90s, Pippen reminded some of their childhood.

“I got a phone call from my cousin, asked if I wanted to go see him and I jumped on it,” high school PE teacher Chad Nardi said. “He was one of the best when I was growing up, so I was like, I’d love to go see him.”

Nardi said he waited in line for 20 minutes. At times, the line outside the store stretched two blocks, rounding a corner and onto South Main Street. Inside the store, the line weaved around much of the bookshelves to the back.

Anderson’s did not allow guests to bring sports paraphernalia but quick photos were allowed.

To set up the signing, Pippen’s publicist contacted Anderson’s two weeks before the event to ask if  “Scottie could come for an event while he was going to be in Chicago on other business,” Clemm said.

No media was allowed into the event. Clemm said these conditions were determined by the author and publishers.

“I did really enjoy meeting Scottie Pippen,” said Nina Menis, a 1981 Naperville Central graduate who was formerly the director of community relations at District 203. “We are Bulls fans, so it’s just fun to see a little bit of that history of the Bulls.”

For Menis, who’s also the CEO and Executive Director of KidsMatter, a local nonprofit organization that helps develop youth, author signings bring the community together.

“Anderson’s Bookshop is such a wonderful partner with District 203 as well as with KidsMatter,” Menis said. “I think it’s great that they bring authors like Scottie Pippen and Julie Andrews and Caroline Kennedy, all sorts of amazing people to our community that we have the opportunity to meet and to read their books.”