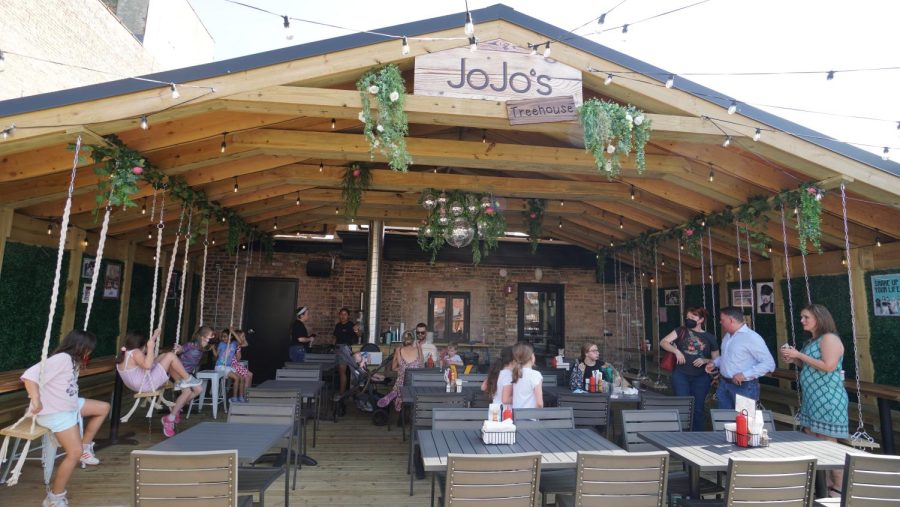 JoJo’s Shake Bar expanded its seating with “JoJo’s Treehouse,” an outside patio designed like a treehouse, at its Naperville location on May 2. The treehouse contains a real tree decked out with disco balls, string lights and wooden swings as seats.

JoJo’s Shake Bar is a retro ‘80s and ‘90s diner specializing in extravagant milkshakes with piled-on toppings, including cookies, marshmallows and fruit. The Naperville location at 5 Jackson Ave opened on Feb. 15.

The Shake Bar always had a back patio, and the idea for a treehouse was already in place when the restaurant first opened. However, Jojo’s held off opening the patio until the weather was warmer.

“Even before it opened, people were asking what it was, so I would say there’s a lot of excitement,” JoJo’s shake maker and Naperville Central junior Kalani Staudacher said.

The treehouse offers something to people of all ages.

The treehouse is the “perfect intersection between what kids and parents want,” said Madi Vandevelde, Jojo’s public relations and marketing specialist. “Every child wants a treehouse, and parents get the nostalgic ‘80s and ‘90s theme.”

“I like it a lot,” Naperville Central junior Avery Puglielli said. “I feel like it’s good for the little kids who want to be outside. It’s just a cool spot for families to hang out.”’

So far, the treehouse has been a hit, with many patrons opting to sit outside.

“People are really loving it so far,” Vandevelde said. “It’s a super fun environment with all of our very Instagrammable locations.”

However, the prices on the menu are a drawback for some. Puglielli said that she goes to JoJo’s less often due to the restaurant being “super expensive.”

While JoJo’s accepts reservations, they cannot be made specifically for the treehouse, making it difficult to get into.

“It would not surprise me at all if it was completely booked up,” Vandevelde said. “We usually sell out all of our reservations, especially on the weekends. But it’s a huge patio. So I don’t want to say that it’s always going to be maxed out.”

JoJo’s ShakeBar is open seven days a week, from 11 a.m. to 11 p.m. Reservations can be made through OpenTable.