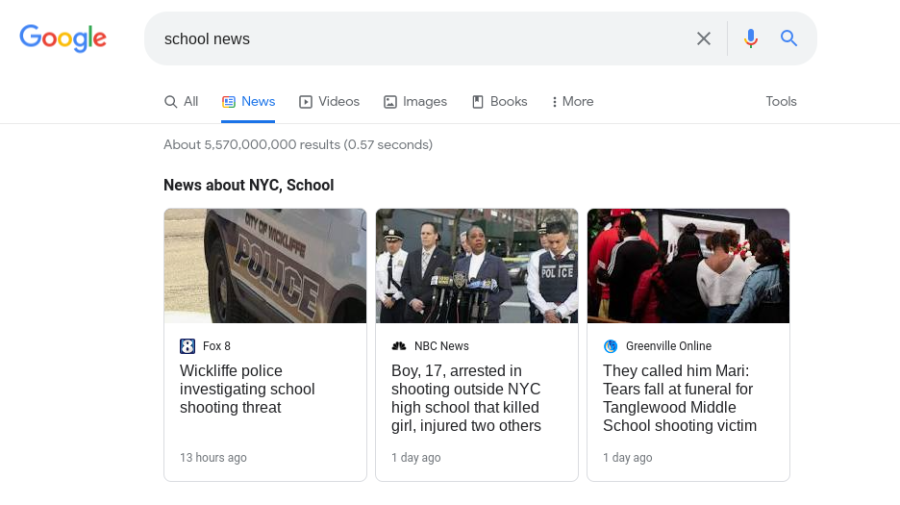 There’s something incredibly sad when the search results of “school news” are almost all school shootings. I write Hallway Headlines, a monthly recap of news we think is interesting for students, and as I search for news pertaining to high schools, this is what I see.

In the wake of another school shooting…

Funny you have to ask “which one?”

On April 5, a student was shot at Erie High School in Erie, Pennsylvania.

On March 31, a 12-year-old was shot and killed at Tanglewood High School in Greenville, South Carolina.

In the time it took for me to write this opinion, a 16-year-old girl was shot and murdered near her high school on April 9.

The U.S. “had 57 times as many school shootings as the other major industrialized nations combined” between January 2009 and May 2018.

So welcome to America! The land of the free, home of the brave and where school shootings are so normal, we consume headlines like “loved ones mourn 12-year-old victim” and “shooting at high school leaves one injured” in the same breath as funny cat videos.

But more concerning is the inability for anyone to do anything. Where is the outrage at children being shot? Where is the political will to do something, anything?

I really wish I had an inspiring message for us, but there is none.

When we chose to do nothing after the Sandy Hook Elementary shooting, when we decided that school shootings have become a normal part of our lives, there is no coming back. Because if the murder of 20 6-year-olds and 7-year-olds can’t prompt change, what can?

We have lost our chance at passing meaningful gun control in America, and we have become a country where guns have become so intertwined in our culture that any meaningful change to the status quo requires huge cultural change first.

I wonder if the rest of the world looks at our school shootings in confusion and disbelief, as if America is a bizarre episode of the Twilight Zone.

And well, if your mind still hasn’t changed, I’ll just show you the search results of “school news.”