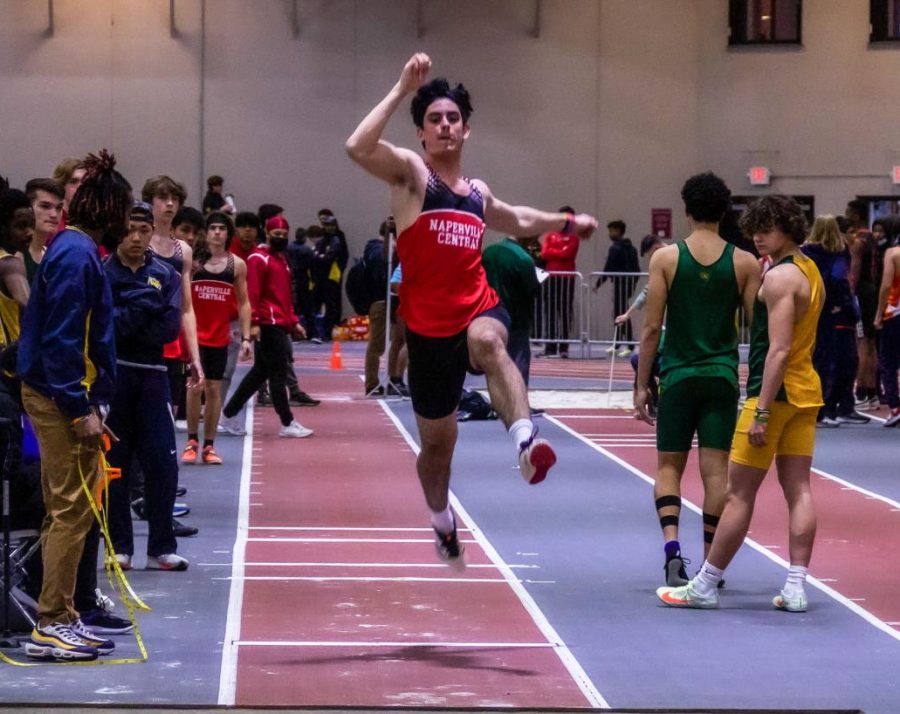 Central senior Zach Wood flies through the air as he competes in long jump on March 18 at the indoor DVC championship held at North Central College.

The boys track and field team won by over 15 points at the indoor DVC, held at North Central College. The girls team lost by one point to Naperville North. In track and field, points are awarded based on the place the athlete finishes in a race or event.

“We have a couple of pole vaulters who have hit the state qualifying mark, multiple distance runners who’ve done it in the mile,” said boys head coach Steven Stack. “Our sprinters are running really fast, and we have the returning fifth-place state finisher in the discus.”

The girls team finished in a close one-point difference behind Naperville North. Sophomore Brooke Sawatzky finished first in the 55-meter hurdles with a time of 9.19 seconds, a personal record (PR). Central had a first-place finish in the 4×200-meter relay. Sawatzky also secured another win in the triple jump with a PR of 10.87 meters.

“Our field event kids last night, they really scored a lot of points for us,” said Phil Allen, head coach of the girl’s track and field team. “It was important for us just to find those little odds-and-ends points here and there. Get two points here, three points there, four points there. That allowed us to hang tight, have it come down to the last race and give us a chance to win at the end.”

The start of the outdoor track season adds several events to the mix including the 4×100-meter relay, the 300-meter hurdles and the discus.

“We’re hoping to get a couple of kids back from injury, which will really help us,” said Allen. “We are just going to continue to work and get better, and we’re going to leave it all on the track again.”

A positive mindset and an encouraging team has led to success on the track.

“As a team, we already have a lot of encouragement and everyone’s always cheering for one another. I think that really positively impacts our team,” said team captain and junior Julia Laird.

The boy’s track team has had a successful year so far with many athletes reaching the top times of the Central track and field program.

“We have a lot of guys that are stepping up and are having really good performances,” said senior and boys team captain Graham McAninch. “We have multiple people going top 10 on Central’s all time list for a bunch of events.”

Even with a successful win, there is still work to be done in order to make the boys team better.

“It’s just kind of getting on track and staying healthy, and keep investing in our teammates. ,” said Stack. “All of the technical stuff, we’re getting better at every day. It’s just continuing to come together as a group as a team, and really being able and willing to go deep for each other.”