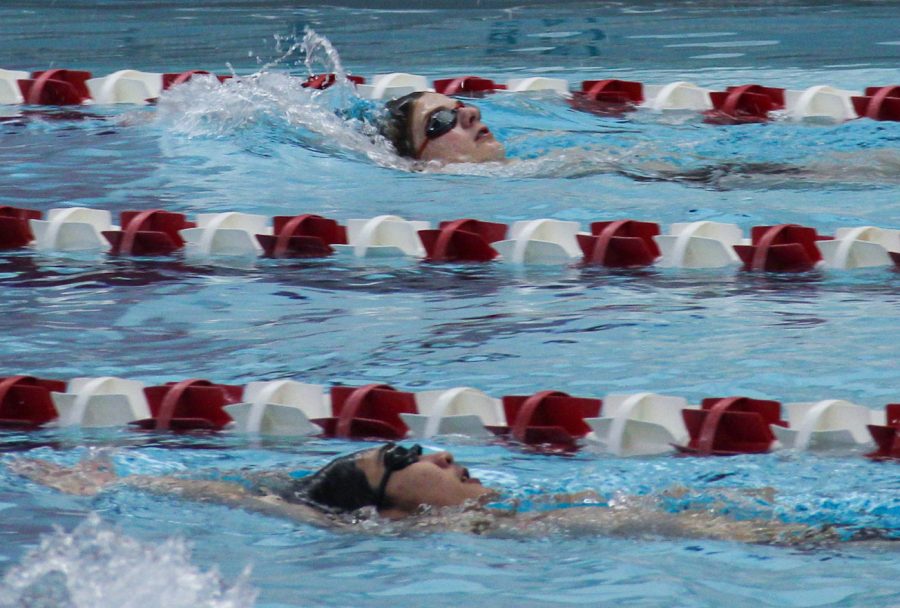 The Naperville Central boys swim and dive team begins to close out a successful season as they approach their final meets of the year.

After outstanding performances by junior diver Chase Coudreaut and senior swimmer Caleb Yau, the varsity team took 3rd with a score of 219 at DVC on Feb. 4.

Despite a rocky start to the season due to practice cancellations influenced by COVID, the boys have bounced back positively.

“We lost two weeks of practice over winter break because of COVID,” said dive coach Laura Warren. “Otherwise, we came back super strong.”

The boy’s work ethic, teamwork, and sportsmanship have pushed them to reach their goals and overcome adversities throughout the year.

“Swim and dive are pretty much completely separate in a sports situation, but when it comes to supporting each other, we’re all one team,” said Coudreaut. “A couple of my teammates struggle with getting over the fear factor of diving, but the team always has their back, hyping them up.”

Reflecting on the season, the boys have made immense progress from their first win against St. Charles North on Dec. 3.

“All of the guys have really progressed from the beginning of the season,” said Warren. “We have some pretty solid boys and have finished almost every meet in the top three.”

As the season progresses, the boys move on to sectionals.

“We’re gonna have to swim fast,” said swim coach Mike Adams. “The boys know everything that they need to do, and I know they will get after it.”

With the final target of making it to state, the coaches have high hopes for their athletes.

“We have two divers going on to sectionals and my goal is that they’ll both do really well,” said Warren. “Both of them are very capable of qualifying for state.”

In addition, Adams said, “The goal is to do well the rest of the year and based on what we saw last week at DVC, I think we are in good shape.”

Likewise, each athlete’s personal expectations help push them to achieve their goals to benefit the team.

“I hope I can place within the top 12 at state so I can score points for the team,” said Yau.

Coudreaut is also looking to place in the top three at sectionals to increase his chances of qualifying for state.

To conclude a rewarding season, the boys will compete for the IHSA sectionals, at Metea Valley high school, on Feb. 19.