An Illinois judge's Feb. 4 ruling might lead some to believe that masks can come off in schools, but it's not that simple. 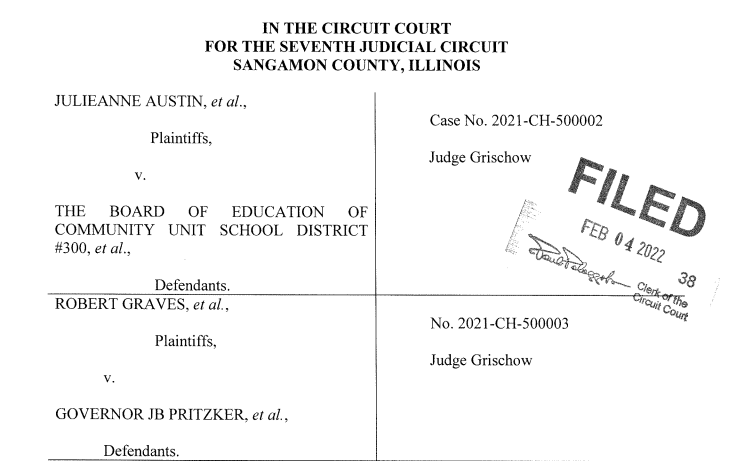 The temporary restraining order issued on Friday by Sangamon County Court Judge Raylene Grischow may be difficult to navigate for many parents, teachers and students who are trying to understand its implications and for whom it applies. Central Times analyzed the ruling and contacted parties involved in the case, including the plaintiffs’ attorney Thomas DeVore and the Illinois Department of Public Health (IDPH), to provide a clearer look at what it means and what comes next.

Is the mask mandate lifted?

Not officially. DeVore sought for all students and parents in Illinois to constitute a class, which the judge said would be premature to determine on Feb. 4. For now, this means defendants in the case like Gov. J.B. Pritzker, the IDPH and over 140 local school boards are only prohibited from requiring the named plaintiffs to mask without due process.

However, the judge, through her justifying analysis for the restraining order, essentially decided that the governor’s executive order and IDPH’s emergency rules were “not valid,” DeVore said. That may prompt school districts to voluntarily suspend their masking requirements.

“Every school district is having this conversation: ‘are we going to have children wear masks, even if they’re not a part of this case?’” DeVore said. “‘The judge is saying it’s unlawful and we’re going to subject ourselves to potential new lawsuits by new parents and new children.’ School districts across the state are saying, ‘until further court orders, we’re not going to have a mask or exclusion policy.’”

Some school districts, like Chicago Public Schools, say they are still planning to enforce such requirements, according to WBEZ on Feb. 4.

Because of that, DeVore says he plans to file a motion to hold CPS CEO Pedro Martinez in contempt of court.

Can my school still require me to quarantine if I test positive for COVID-19 or am a close contact?

Similar to the mask mandate, the judge’s restraining order only officially applies to named plaintiffs in the court case. For these individuals, the governor, IDPH and school districts cannot require them to quarantine if they test positive for COVID-19 or are close contacts without due process of the law.

Again, the additional analysis that the judge provides in her ruling may prompt school districts to voluntarily suspend their quarantine requirements.

What is the due process aspect of this case?

Prior to the pandemic, the only public agency with the power to require citizens quarantine outside of a statewide emergency was the IDPH and its representative county public health departments. The Illinois Department of Public Health Act’s process for quarantine orders involved:

An immediate order of quarantine in verbal or written form from a public health department.
Within one or two days (depending on the method of communication) of the order, the health department must obtain consent or petition a court to require an individual to continue their quarantine.
Individuals are entitled to a hearing in front of the court and legal counsel during this process.

A series of IDPH emergency rules allowed for sidestepping this process, giving school districts the authority to require students and staff to quarantine if they tested positive for COVID or were close contacts. DeVore and the judge say these rules were not made consistent with the Illinois Administrative Procedure Act, as the governor and IDPH could not demonstrate the existence of a new emergency to warrant the changes.

Because courts have classified masks as medical devices intended to limit the spread of disease, they constitute an alternative form of quarantine under the Illinois Department of Public Health Act. Absent the IDPH’s emergency rules, any process used to order students to stay at home because of COVID infection also applies to requiring masks.

What will happen next in the lawsuit?

The governor’s lawyers will seek an expedited appeal with the Illinois Fourth Circuit Court of Appeals.

“The court’s misguided decision is wrong on the law, demonstrates a misunderstanding of Illinois emergency injunction proceedings and has no relation to the record that was before the court,” Illinois Attorney General Kwame Raoul said in a press release. “It prioritizes a relatively small group of plaintiffs who refuse to follow widely-accepted science over the rights of other students, faculty and staff to enter schools without the fear of contracting a virus that has claimed the lives of more than 31,000 Illinois residents – or taking that virus home to their loved ones.”

Beyond an appeal against the temporary restraining order, the case itself has yet to be decided. Both DeVore and the governor’s lawyers will still have to argue the merits of the case in front of Judge Grischow at a later date.

So what does this ruling mean for Naperville District 203?

The specifics are not yet clear. In a Feb. 4 community message released shortly after the ruling, Superintendent Dan Bridges explained that Naperville District 203 administrators will consult with attorneys to determine the impact of this ruling on current COVID mitigation efforts.

“We will communicate with you as soon as possible on whether or how this ruling will impact Naperville 203 students and staff,” he wrote. “Thank you in advance for your patience as we review this decision and our plans.”

Parents and students received a newsletter from Bridges following the emergency board meeting that confirms all current COVID protocols and safety measures will remain in place for all students and staff except for the named plaintiffs in the cases and instruction will proceed as usual tomorrow.

Central Times will continue to update this story as it develops.

Jeremy Zhao contributed to this report.