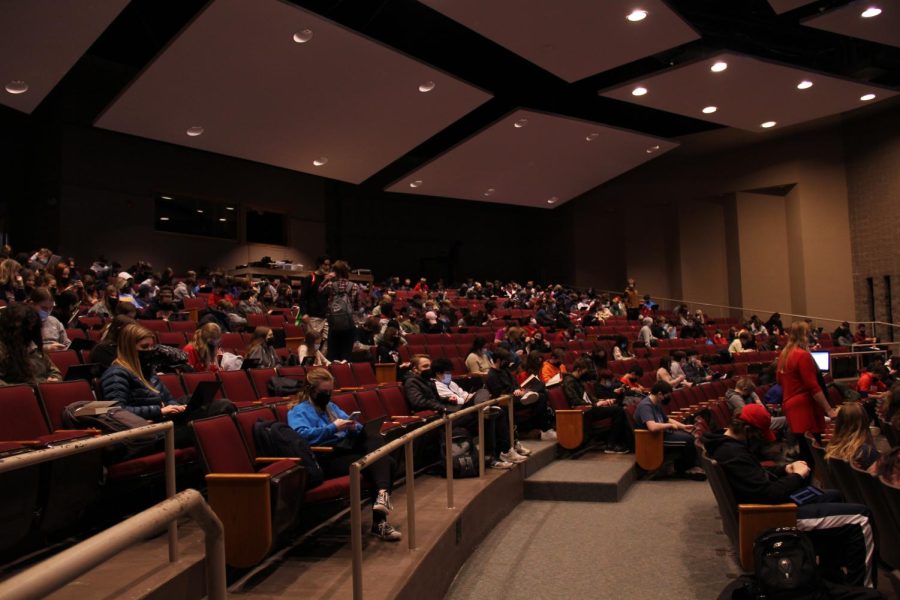 Students study in the auditorium during a SOAR period on Feb. 3.

Students and staff at Naperville Central started participating in SOAR periods on Tuesdays and Thursdays starting Jan. 6. SOAR stands for Success of All Redhawks.

Thus far, students have only attended homeroom periods, classes sorted by grade and alphabetic last name, to engage in community building activities, take surveys and watch school-wide videos. The first support period will take place on Thursday, Jan. 27. During this time, students will report to classrooms designated for a variety of academic and specific course needs based on their own choice or teacher request.

Students watched an instructional video on choosing their support period location during the Jan. 18 homeroom period, and picked their option on the responsive schedule menu in Infinite Campus on Jan. 20. All teachers are required to supervise some sort of support option, and there are 129 being offered in total, including quiet and collaborative study halls as well as academic help. As of now, students will have the option of going to multiple support locations during a single period.

In general, staff and student feedback about SOAR periods has been positive, Principal Bill Wiesbrook said.

“What I’ve heard from the few students and staff I’ve spoken to is that things are going well,” he said. “I did hear from a teacher that some of the kids don’t see the value.”

Indeed, several students feel that the time taken up by homeroom periods could be better spent.

“The homeroom aspect is kind of weird,” sophomore Faiz Muhammad said. “Socializing during the first few days was really awkward. It was unnerving to be in this classroom with people and having to sit around the table and you’re forced to talk to other people.”

Many of the introduction activities in homeroom periods are meant to build a sense of community, Wiesbrook said.

“It differs by grade level,” he said. “In freshman homeroom, those kids ought to know ‘we’re going to be together for a long time.’ In that situation, a 14-year-old student might be more likely to see the value [of getting] to know each other more than a senior might.”

For some teachers, watching the same group of students progress through high school is also an exciting opportunity to strengthen relationships.

“My group is a group of freshmen, which I think is kind of cool,” English teacher Tom McGrath said. “We’ll have them presumably for four years, and I feel that gives them a common face.”

“We had in previous years [said] ‘hey science teachers: sorry, you have to carve out 30 minutes of one of your class periods to have kids take this survey,’” he said. “That’s not ideal.”

But the new period does take equal time away from every other class period, and for some, the constantly shifting schedules can be somewhat disorienting.

“We’ve had five schedule changes in the last year,” McGrath said. “It’s kind of disruptive when the schedule changes abruptly at semester. Because we have late arrival, it’s tough to lose seven or eight minutes each period when you’ve built your courses to fit a 50-minute period.”

Administrators have thought about this issue in their planning, Wiesbrook said. For instance, they’re aware of the concern that teachers might move most of their tests to Mondays and Fridays, which have the longest periods.

“Just by bringing it to the attention of teachers, will that be enough to prevent the problem?” he said. “The plan is, wait and see.”

Wiesbrook said he anticipates support periods being the most well received at Central. Many students agree.

“A lot of kids like the support option,” Muhammad said. “I’m probably going to use it to do homework. I have some other clubs I want to work on. A lot of people would use SOAR to just chill out and not do anything. Either way, it’s nice to have a period where you’re not expected [of] anything academically at all.”

For now, SOAR continues to be a work in progress. Administrators plan to solicit feedback with two surveys throughout the semester.

“We know there are going to be adjustments and improvements moving forward,” Wiesbrook said. “Most of the adjustments will probably be occurring next year.”

Kait McHale contributed to this report.