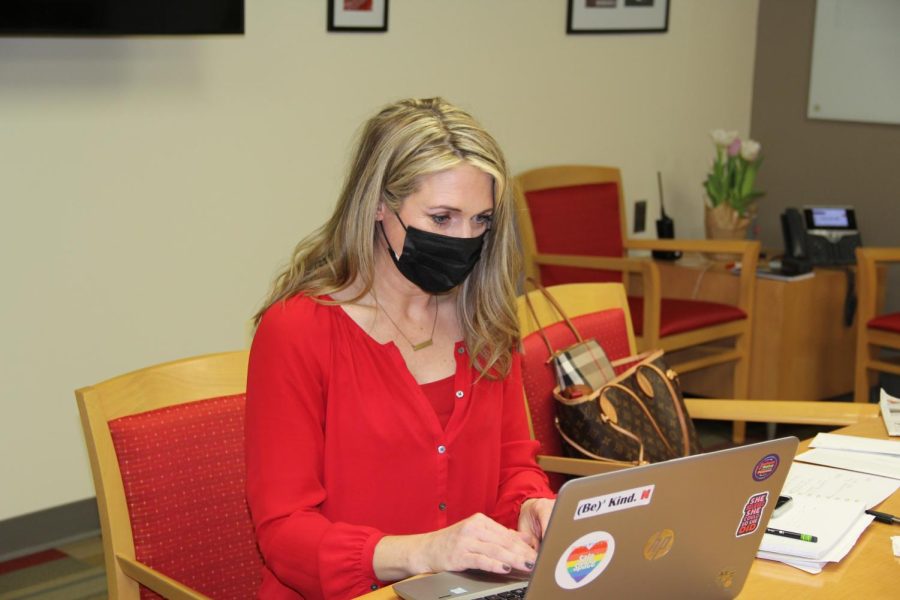 Jackie Thornton was recently appointed as Naperville Central's new principal. She will replace retiring principal Bill Wiesbrook in July. Thornton has been an assistant principal at Central for 19 years.

Assistant Principal of Curriculum & Instruction Jackie Thornton was named the next principal of Naperville Central at the Tuesday, Jan. 18 Board of Education meeting. She will officially assume the position on July 1 after current Principal Bill Wiesbrook retires on June 30.

The announcement came after a four-month hiring process, involving two rounds of interviews and numerous candidates. Thornton was the only applicant for the job to have previous experience working in Naperville District 203 or at Central.

While administrators at the district office originally planned for an additional stage of interviews with student, parent and staff focus groups, Thornton stood out to a level where they felt extending the process would be unnecessary.

“She has a very positive history of leadership in the district,” said Dr. Chala Holland, assistant superintendent of administrative services and secondary education. “She’s been here for a long time but has become a trusted leader.”

Many of her colleagues, like Wiesbrook, also say they are confident in her future leadership.

“She understands the many variables that contribute to this school experience deeply,” he said. “She consistently exhibits great character and ethical decision making. She really gives herself to Naperville Central.”

Thornton, who earned a Bachelor’s degree in mathematics from Benedictine University and Masters degree in education from North Central College, began student teaching in 1996. Because of an unexpected retirement in the middle of the school year, she was quickly hired as a full-time math teacher.

After spending a few years as a teacher and math department chair, she was promoted to assistant principal, her current position.

“There were literally no candidates at the time,” Thornton said. “A majority of our department chairs were very experienced and close to retirement. Given the direction that Naperville Central was going in and the comfort I had with assessment and data because of my background in math, I got persuaded to take the job.”

Holland says Thornton’s experience at Central set her apart from other candidates.

One of Thornton’s biggest priorities is “to make sure that every student knows they belong, whether it’s through their activities and sports, courses and curriculum and how the building runs things,” Holland said.

As principal, Thornton will focus on continuing new initiatives Central is already pursuing, like the new SOAR periods, which stands for Success of All Redhawks.

“I’m hugely excited about the possibilities,” she said. “That will continue to evolve. That’s going to impact student achievement.”

With data from surveys students took earlier this year like Panorama, Thornton wants to further align Naperville Central with the annual school improvement plan and the district’s comprehensive equity plan. She hopes to emphasize inclusivity.

“Most kids have a great experience here. Not every kid does,” she said. “We need to look at the ‘why’ behind that and how can we continue to address that.”

She also plans to help students and staff recover from the academic effects of the pandemic.

“We have to meet students where they are,” she said. “We can’t expect Algebra 2 to look the same as it did in 2019. We have to continue to make some adjustments and rebuild. That might mean it takes us a few years to get back to a normal curriculum. It also might mean maybe kids don’t need all of what we used to offer in our curriculum.”

Part of that recovery may also include more lighthearted activities, like a prize wheel Thornton devised at the end of the last school year to reward teachers for their work.

“She came up with this idea and pulled staff members’ names out of a hat,” Wiesbrook said. “One of the prizes was ‘pull the fire alarm on the day of a fire drill.’”

Others included not having to proctor the PSAT and switching jobs with the principal for a day.

Thornton says she is thankful and excited for this new opportunity.

“I learned how to be a professional educator at Central,” she said. “I’m really proud to be able to serve this community through the role of principal. I’m really looking forward to new possibilities with students along the way.”