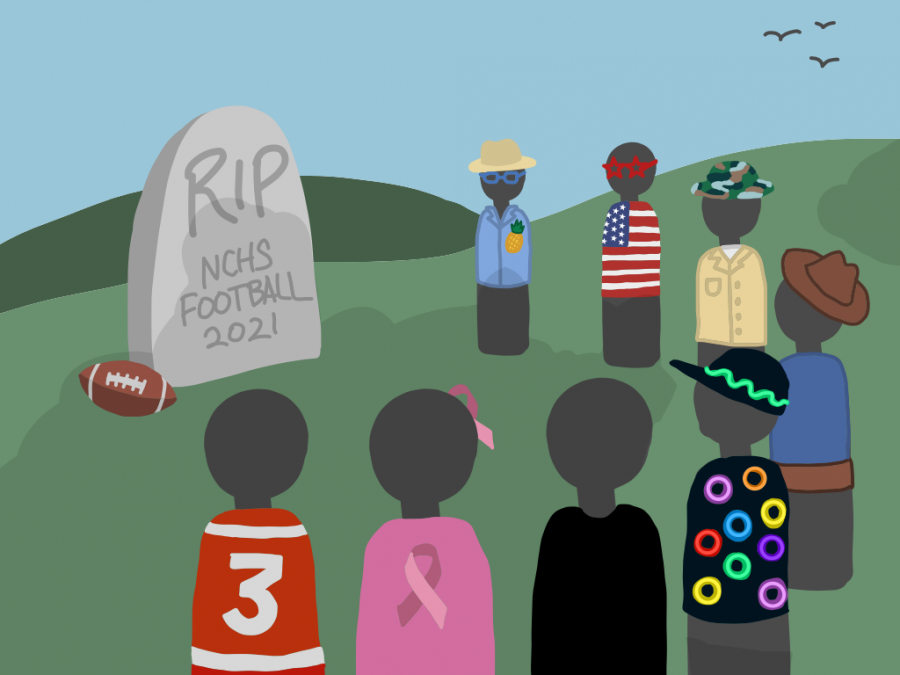 It looks like the time has come when we pack up our bags, put away our cheesy student section themes and drag ourselves to school on Fridays without anything to look forward to after.

After a devastating 36-7 loss on Nov. 6 to Loyola Academy, who by the way has like 1,000 players on their team, the fans, coaches, families and players of Naperville Central High School shed tears. The season was over. The hard work put in since the summer finally came to a close. Rather than soaking in the dreadful pain that the season is over, why not celebrate the season and all the years that the seniors have spent here?

Let’s celebrate each and every one of the themes that the Rowdies picked out every season, the music that blares throughout the hallways on those fall Fridays, and the different substances thrown around in the student section, my personal favorite being the balloons that were thrown around during the pink-out game this year due to the freshman being completely fascinated by them.

Let us celebrate the amazing and competitive game against Lincoln Way East High School, with Seth Lendzion kicking the winning field goal with under five seconds left on the clock. Remember the moments where the team once stood as underdogs coming out victorious.

The team endured a tough COVID-19-shortened season in 2020 without the opportunity to have an IHSA state playoffs run. For one particular player, Niko Gordon, he played in a shortened varsity season last year and had his senior year cut short due to a devastating injury.

“Naperville Central football means so much to me,” Gordon said. “Our guys have spent the past four years together, creating a family and helping each other out.”

The football program at Naperville Central meant so much more to the players than just a team, it meant a home away from home. Practicing four days a week, playing in a game on the fifth day and watching film on the sixth, players put their heart and soul into the program every week of the fall season.

Say as much as you want about the “toxic” football culture and how it is “overhyped” in high school but it brings the school closer together. You cannot sit there and tell me that a student section doesn’t form friendships or that it doesn’t bring the student body closer. The team itself serves as a second family for some of the boys.

It’s not just over for the football team, it is over for the student athletic trainers, the Arrowettes, the cheerleaders, the fans, and most importantly, the senior parents. It was the last time they saw their child all grown up playing football, unless of course they will continue their athletic career into college.

Seniors, this isn’t the end, this is the beginning. Although football might be over, it is time to come out and support all the other athletics that Naperville Central has to offer. Let’s celebrate the final football season, not dread it.