New Naperville chief of police sworn in, brings experience and plans to NPD 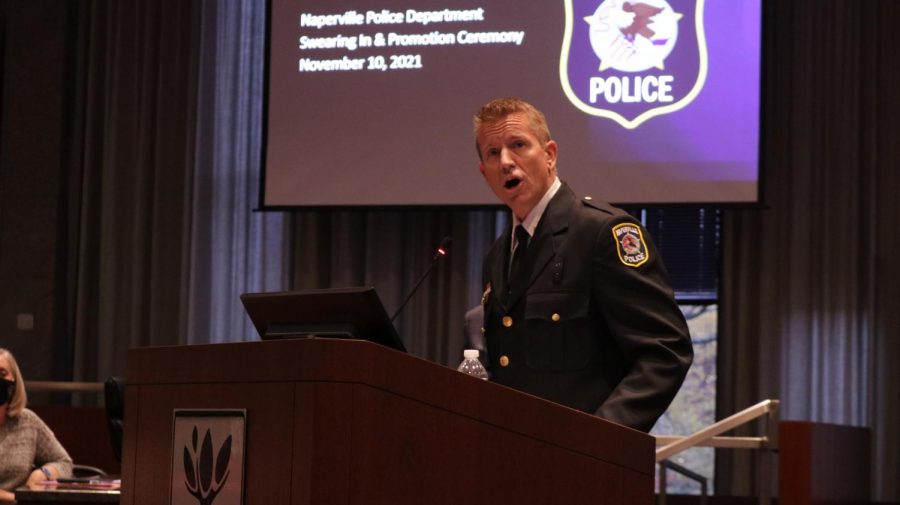 Jason Arres was sworn in as Naperville Police Chief on Wednesday, Nov. 10. He previously served as interim police chief following the retirement of the previous police chief, Bob Marshall.

After former Chief Bob Marshall retired in July of this year, Arres stepped in as interim chief. Following an extensive nationwide hiring process conducted by Naperville city officials, he was one of three final candidates to be interviewed, before finally landing the job.

“He has an impressive professional resume that includes involvement in or oversight of every aspect of the Naperville Police Department,” said City Manager Doug Krieger in an Oct. 25 press release. “He is a strong leader with outstanding communication skills, the respect of the men and women of the Naperville Police Department, and a strong existing connection to our community.”

Prior to assuming this position, Arres has worked in the Naperville Police Department for 20 years.
While he first graduated from Northern Illinois University with a degree in mathematics, working as a banker for two years, Arres ended up returning to college to acquire the skills that would help him enter law enforcement.

As a rookie patrol officer, he made sure to set feasible, yet challenging goals.

“Set goals,” Arres said. “A life without goals is an endless journey to nowhere. One of my first goals was to be an undercover [officer] in our drug unit. Three years into it, I was selected as the next undercover.”

He would work in the Special Operations Group, purchasing illegal substances to catch criminals, for the next seven years. During that time, he also served on the SWAT team and on a state weapons of mass destruction team, where he trained to deal with biological, chemical, and nuclear attacks.

In 2011, Arres was promoted to sergeant. He headed up a project to install cameras on squad cars and oversaw the canine division. Arres then became patrol commander, worked in the Office of Professional Standards, which handles internal affairs and media relations, and led the department as deputy chief of patrol and deputy chief of investigations.

One of Arres’s recent responsibilities is to lead the Naperville Police’s response to the four threats made to Naperville high schools since the start of the school year.

“We have to take them seriously,” he said. “We have an officer assigned to the FBI. We want to protect our students. Do not forward these on because then it makes it harder for us to trace the origin. Bring them to your parents and get the police involved early.”

Arres says the Naperville Police Department is “ahead of the game” on the police reform that has dominated the national conversation since the murder of George Floyd in 2020.

“I’ve been with the department 20 years,” he said. “We’ve never allowed chokeholds. We are very progressive. We’re always looking for ways to make ourselves better.”