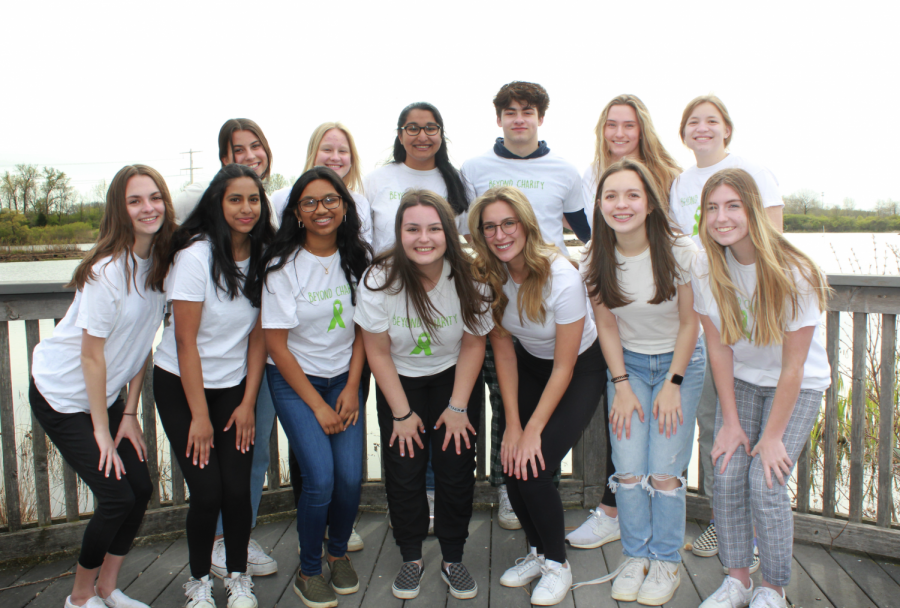 Courtesy of Beyond Charity

Naperville Central senior Aparna Ramakrishnan began developing an idea in 2020 inspired by her own mental health journey. She established Beyond Charity, a non-profit that takes a three-pronged approach through legislation, presentations and social media to reduce the stigma surrounding mental health.

“I came up with the idea myself and then I tapped into a few of the existing members right now,” Ramakrishnan said. “They were interested in helping so then it just slowly grew and bundled. As we got more popular, more people wanted to join.”

One of these new additions was Central senior Anna Schmidt, the group’s legislative director.

“I had been dealing with mental illness for a long time prior,” she said. “It took a while to understand what it was and to get diagnosed. My friend Aparna reached out to me and was like ‘Hey, we had similar experiences in the sense of the diagnostic part and I want to reach out to other students who may be experiencing similar things.”

As Beyond Charity was starting out, they struggled to build a reputation that allowed them to get presentation opportunities.

Once the group slowly started to give presentations and gain data and feedback, the organization grew at a much more rapid rate. Their Instagram account amassed over 1,500 followers, they’ve informed 11,000 students about mental health and coping strategies and given presentations over Zoom across the U.S. and in Kenya, Rwanda and India.

“I think the biggest thing [I learned] from struggling to get presentations is the idea of persistence,” Ramakrishnan said. “It’s not the number of people you’re presenting to, it’s that one person who takes the time and understands the information and goes out and uses it in their own life.”

The idea for the non-profit stemmed from Ramakrishnan’s own experience with her own mental health as she balanced being a student and extracurriculars.

“I struggled a lot in junior high and early high school with my own mental health,” she said. “I have severe anxiety and depression. Going through my mental health journey and finally finding the right coping strategies for me are what propelled me to start Beyond Charity so that other kids didn’t have to struggle… I wanted to go above and beyond what was provided and give students effective tools that could be used. The drive to go beyond is what inspired the name.”

Ramakrishnan considers the group’s Beyond Charity Law passed within Illinois as their biggest achievement. The bill requires schools to include suicide prevention hotlines on student ID cards and goes into effect on July 1, 2022.  Even before the legislation’s passage, Beyond Charity worked with Districts 203 and 204 to implement the change this year.

“I think it was really amazing,” she said. “It’s a testament to show that no matter your age, you’re always able to achieve great things and I think it’s amazing for students to be able to do that.”

The group worked with Illinois Rep. Janet Yang-Rohr and Rep. Michelle Mussman on the bill, and the process took around a year to complete. Mussman’s legislative team helped the group write up the legislation.

“It was a lot of cold emails to legislators and representatives, trying to find the right fit for us as well,” Schmidt said.  “When it first got passed for the House and Senate, especially unanimously, it was amazing to see adults who wanted to see change in mental health as well.”

As several members of the group, including Ramakrishnan, will graduate this year, new team members have been learning the ropes and will take over the group soon.

“I want to keep Beyond Charity a high-school student run organization so it continues to be peer-led, understanding the needs of current students and gather current, effective coping strategies,” Ramakrishnan said.

Schmidt is also graduating next year and shares the same sentiment..

“It’s really cool to see the impact that Beyond Charity had on these individuals to step up and be like ‘hey, I want to help out, I want to be a force for good mental health,’” she said. “I feel like the only way that we can help youth with mental health is for the youth to help each other.”

For Ramakrishnan, Beyond Charity has been a positive force within her life and allowing her to build off of her own mental health journey.

“It has turned my struggles into fuel to make sure other students do not struggle but understand symptoms and effective coping strategies,” Ramakrishnan said. “The message we want people to gain is that it’s okay to not be okay! Understand and accept what you’re going through and look for effective, positive coping mechanisms.”