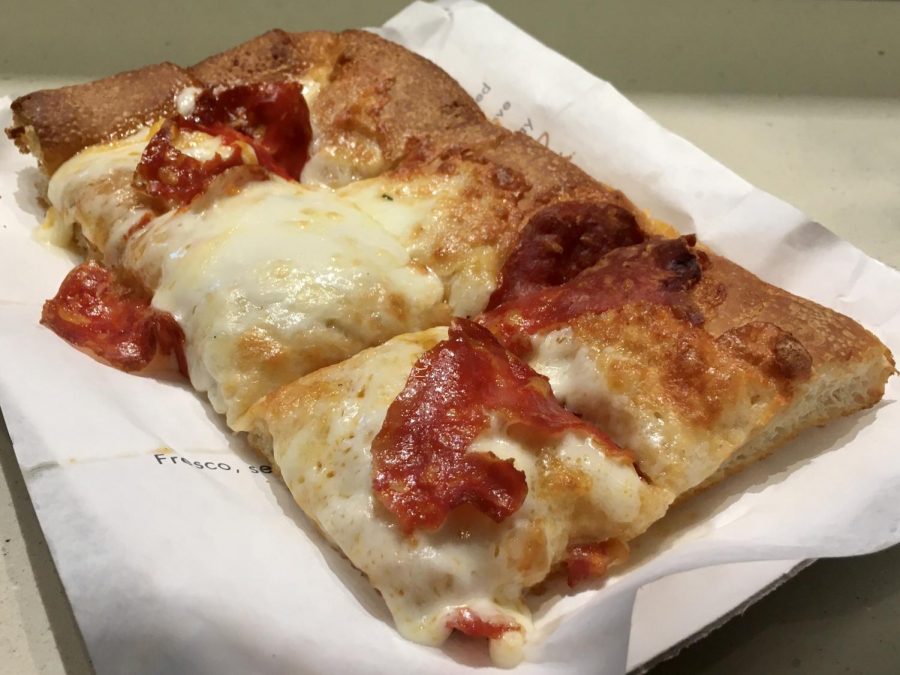 Starbucks sells an $8.50 slice of pizza that contains spicy salami and mozzarella cheese.

Naperville has quite a few places to get a slice of pizza, and they usually are quite affordable. But the slices of pizza at the Starbucks Reserve in Downtown Naperville go for an average of $8. They have four types of pizza and one seasonal variety. I opted for the Salame Piccante slice, which contains spicy salami and mozzarella cheese. The slice costs $8.50. I chose this as it more closely resembled the classic pepperoni pizza, but it did not come with tomato sauce.

The crust of this pizza is not the normal type of crust you would encounter with a pizza. It can be best described as sourdough-like, with less sour. It doesn’t have the classic, yeast heavy smell that normal pizza crust smells like. The crust is also pre-cooked before they apply the pizza toppings, which can contribute to the overly crispy crust I experienced. Because of the way they pre-cooked it, it was also a rather thick crust.

The cheese was high quality but had a less than optimal cheese pull. The grease was an acceptable level, as it did not over saturate the pizza, and still allowed it to be an enjoyable slice.

The Salami on this pizza was disappointing. Starbucks market’s this as a “spicy salami”, which is not very accurate. I experienced only a hint of spice, and nothing that I would label “spicy,” the spice level felt like they put a sprinkling of pepper on it, and that was all. The Salami also seems to make the slice quite salty. The salami was laid out in a stripe pattern, which looks nice, but results in subpar meat coverage, only having a piece of meat every 3-4 bites.

The slice was fine overall. Is it worth $8.50? No. The following reasons are why: The crust is too crispy, and too much of the slice is taken up by it. The crust is also nothing special and is missing the classic yeast smell. The salami is not spicy as advertised, it’s in a bad configuration, and is salty. The slice size was decent, but not what you would expect for more than eight dollars. The pizza did have redeeming qualities though, the cheese was very good, and the ingredients overall seemed high quality. The largest issue with this slice is the price, it’s too expensive to recommend. Overall, it’s an interesting slice to try once, but I’m not interested in purchasing it again.