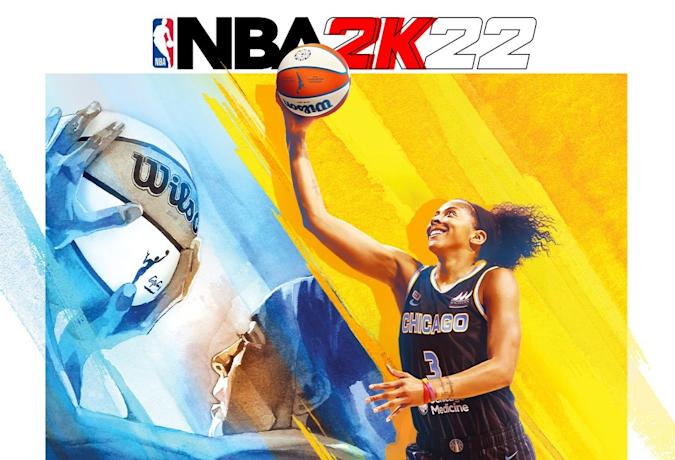 Over two decades after its inception, the NBA2K game franchise is featuring a woman as its cover athlete for the first time. And she just so happens to be a Naperville Central graduate.

Candace Parker, Class of 2004, is the face of the WNBA 25th Anniversary Special Edition of NBA2K22, which came out Sept. 10.

This is no small feat. Over the years, the 2K franchise has been instrumental in constructing a loyal fanbase for the NBA. Take-Two Interactive reports selling nearly 90 million copies worldwide, with the series’ most popular game coming just two years ago.

“The NBA particularly is trying to highlight and accept the efforts of the women in their game,” said Andy Nussbaum, Naperville Central’s head girls basketball coach.

Nussbaum coached Candace Parker all four years of her high school career, and the duo were part of the IHSA State Championship-winning teams  in 2003 and 2004.

Even in Parker’s freshman year, Nussbaum saw something special in her.

“My assistant says to me… how many points again do you think Candace will average?” Nussbaum remembered. “I said 20. He was kind of surprised, but I thought [that] from the beginning. Yeah, she was going to be a very special player.”

As a junior, Parker would lead Central to a 35-0 record.

At the University of Tennessee, Candace Parker, under the tutelage of legendary coach Pat Summitt, would lead her team to consecutive NCAA championships in 2007 and 2008.

Selected as the first overall pick in the 2008 WNBA draft, she would go on to become a six-time All-Star and two-time MVP.

Candace’s journey to the WNBA is chronicled in Adidas’ “Impossible is Nothing” commercial that was released Sept. 16. The ad includes Nussbaum.

Beyond the stat sheet, however, lies a sometimes overlooked attribute in professional athletes: personality. And Parker has lots of it.

“I actually met Candace Parker after one of our basketball games,” said senior Hayley Hayes.

Hayes has been playing basketball for as long as she could remember and started high school basketball as a freshman. “She’s amazing,” she said of Parker. “She’s down to earth. She’s really sweet.”

Parker’s appearance on the cover of a popular video game could also increase exposure for the WNBA itself. While the league has gained in popularity over recent years, it still trails far behind its male counterpart.

Nussbaum, who has maintained a close relationship with Parker over the years, echoes this sentiment.

“I think the women’s game is tremendously interesting,” Nussbaum said. “Yeah, obviously they don’t have these thunder slams like you see on ESPN [from the NBA], … but I think if people just give the women’s game a chance, they’ll be more intrigued.”

Strang also says the effects of this milestone extend far beyond the cover of a video game.

“I think it’s really great, especially for the younger female athletes because it gives them a role model to look up to and I think inspires a lot of them.”