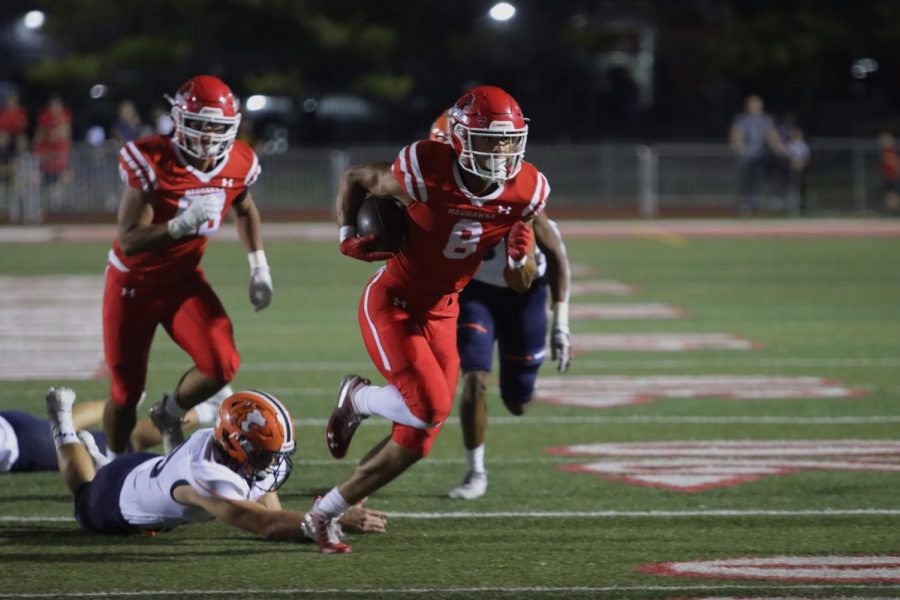 Senior wide receiver Reggie Fleurima breaks through defenders to score a touchdown in the first quarter.

“I thought we were able to move the ball effectively,” he said. “Our quarterback run game was really effective.”

The Redhawks were able to up their highest score of the season against North.

“What went well was that we finally got an offensive advantage,” Central senior offensive lineman Quinn Hurley, said. “Our offense is finally getting together.”

Ulreich and Hurley both said the team needs to work on “complimentary” football, when the offense or defense steps up while the other side falls behind.  Although the offense was Friday’s strong suit, multiple failed drives hurt the team.

“We just took too many poor three-and-outs, because ultimately it’s about trying to play complimentary football and we’re still trying to get there,” Ulreich said.

Three-and-out refers to the situation in which an offense completes three plays without reaching a first down, resulting in a punt.

The Redhawks struggled to play “complimentary” football and North put up 14 unanswered in the second quarter.

Ulreich still says he’s confident in the defense, an aspect of the game that has been strong all year.

“Our defenses played so well all year, so we’re confident that they’re gonna play well again,” he said.  “A lot of the mistakes that were made in the game were correctable.”

Despite recent losses, the team treats each game as a learning experience and still believes they can turn it around.

“We feel in the last three weeks, [if] we continue to get better and continue to emphasize those things [and] start playing good football by the end of the year, it gives us an exciting chance to do some things,” Ulreich said.

Although the game did not go according to the team’s plan, the sense of community garnered by festivities of the crosstown classic put Hurley in a good mood before the game started.

“I felt commitment towards my team, towards the players that I was with, and the hawk walk there was super exciting because it just showed the community was truly behind Central,” Hurley said.