In his free time, Brendon Boonsearm likes to explore abandoned and historical buildings to photograph hidden pieces of history 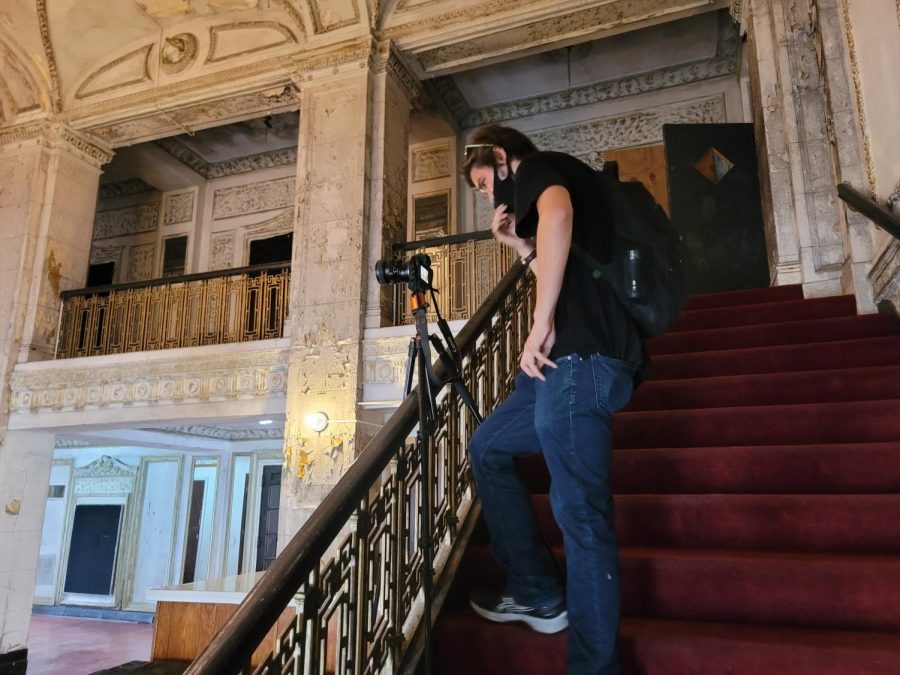 Boonsearm sets up a shot in the old Central Park Theater in Chicago's North Lawndale neighborhood.

As times change, society changes too, leaving behind pieces of history and an abundance of untold stories. For Naperville Central senior Brendon Boonsearm, exploring old and abandoned buildings is a way to appreciate those stories.

Boonsearm is part of a group of urban explorers, (which is where the hobby gets its name: “urbex”) most of whom keep to themselves or small groups. However, they’re all united by a common interest.

“Some of these places have been closed for half to almost even a century,” Boonsearm said. “So as long as no one goes in and grafittis it, it’s the same as it was when it closed.”

For many explorers, finding these buildings and seeing the history within them is incredibly rewarding, and they prefer to protect the discretion of their hobby.  “Other people, they kind of just want to be the first one,” Boonsearm said. “The first one to post. The first one to get 100 likes on Instagram. I value the preservation of the spots, keeping it off the internet and just preserving the history of that place.”

This is not an uncommon practice among explorers, who try to maintain the hidden nature of the abandoned structures and retain their own catalog of sites to explore. Boonsearm adds placemarks all over the world on Google Maps when he finds a site he wants to visit.

“I mark them green once I see them to keep track of everything,” he said.

Most of these urbex sites are sitting right out in the open all over the country; they just require some careful observation to find. As one of the oldest cities in America, nearby Chicago has ample sites of interest.

In Boonsearm’s case, with his interest in architecture photography, old churches and theaters are his favorite places.

“The theaters in America, they’re just really important to American history, ” Boonsearm said. “In Chicago there’s the big three: Uptown, Congress, and Avalon, and it’s called the Regal now. Those three are currently in the process of restoration. But I’ve been in Congress, and I’ve been in Avalon, and those two are just astounding.”

As a personal interest project, Boonsearm is working to photograph and document the theaters in Chicago. On the day following his interview with Central Times, he headed to Central Park Theater in Chicago to photograph the inside before Preservation Chicago, a local group dedicated to protecting historical architecture, held an event there.

Boonsearm offered Central Times the unique opportunity to tag along on this trip and see what his process looks like when he explores an abandoned site, as well as to see his work around the Central Park Theater.

The first stop Boonsearm showed CT was an abandoned church not far outside the Naperville area that was built in 1958 and closed in what he believes to be sometime around 2013.

Getting into a building can sometimes be challenging for those who want to explore, especially when laws and regulations can get in the way.

“Nine times out of 10 there has been an organization left to care for the building,” Boonsearm said. “So they usually leave a phone  number on a PDF on Google. Just call them up and say, hey, I want to photograph this place  and I’m working on a project architecture documentary, and it usually works.” However, when things don’t work out, he usually hopes that a door has been left unlocked somewhere.

“I’ve never had any bad encounters,” Boonsearm said. “I’ve never been arrested, never been caught. But it’s because I’m going there with good intentions; making documentaries to photograph and film a historical place, not just to leave graffiti or break in.”

Once inside the building, Boonsearm gets to work staging up for his photos. “I close all the doors to keep out the extra light,” he said.

In the church I visited with him, Boonsearm wants to get what’s called the “hero shot.”

“[I] get at the center, to take it in the middle of the seating,”he said. “Get the straight shots, nothing warped, nothing flaring up, just keep the shots out straight and symmetrical, and all natural lighting.”

Although some photographers may choose to light a dark or shadowed space, Boonsearm prefers to take the photo with only the natural light.

“You want the picture to look just how the scene does,” he said. “These buildings are just encased in their history and I try to capture it in that natural state.”

He spends a long time perfecting the hero shot, as he adjusts fine camera settings and takes multiple photos that he later stitches together to form a whole portrait of the scene.

“It’s not quite like a panorama,“ he said. “I call it stacking.”

Boonsearm uses what’s called a tilt-shift lens to finely adjust the effective position of the camera sensor through a system of finely tuned mirrors. This way, he can get different height shots without shifting his tripod and having to reset.

This particular church had lots of old furniture and even kitchen appliances stowed around the various rooms. Many areas seemed untouched for years. Plastic cups of foil sealed butter still sat preserved in the cabinetry.

In some cases, the power or other services may still work in the building.

“I went to a church once that was a pain to get into, wasn’t easy,” Boonsearm said. “But when we got in, it was pitch black and every single window, all the doors—everything was boarded up so there was no natural lighting. My friend went to the back room and he found a power box. He slapped all the switches and all the lights turned on and lit up the whole sanctuary. That was probably one of the best trips I’ve been on.”

Once he got his shot, Boonsearm headed off to his next stop of the day, being sure to leave no trace and close all the doors behind him.

The next stop for us was the old Central Park theater in the North Lawndale neighborhood of Chicago. Boonsearm was visiting just prior to an event put on by Preservation Chicago.

Upon arriving, Boonsearm began photographing the lobby full of century-old architecture while Max Chavez, Director of Research and Special Projects at Preservation Chicago, explained the history of the building.

“The theater opened in 1917 and was actually one of the first places to ever have air conditioning,” Chavez said.

Boonsearm wanted to take photos for a personal project, as well as to spread the word about the theater trying to be preserved.

“I have wanted to see this place [for] forever,” he said. “I know people who have broken in here but I really don’t like to cause damage; that’s just ruining a piece of history.”

The theater became too much of a financial burden in the late 1970s and was abandoned for a short time before being picked up for use by a local church who restored the main auditorium, however the rest of the building is still in poor shape.

“The building is all still here,” Boonsearm said. “They just don’t make buildings like this anymore. It just needs to be cleaned up and preserved.”

Boonsearm also brought out some of his video gear to take shots for a documentary and meticulously took photos at different angles to stitch together.

“It’s really tedious work but it’s worth it for the final shot,” he said.

An independent explorer, Boonsearm has other projects that he works on in cooperation with some organizations. Often, working with a city or organization is the best way to get exclusive access to new sites. For example, when the U.S. Steel mill in Gary, Indiana closed, the town quickly lost much of its life due to the lack of jobs. Boonsearm reached out to the city of Gary in hopes of working with them to create a documentary on the city.

Once he gets his photos, Boonsearm spends time stitching shots together and editing details before he either posts them to his instagram, @graveyardsh1ft_ . “Eventually I want to create a website to display all of my projects,” he said.