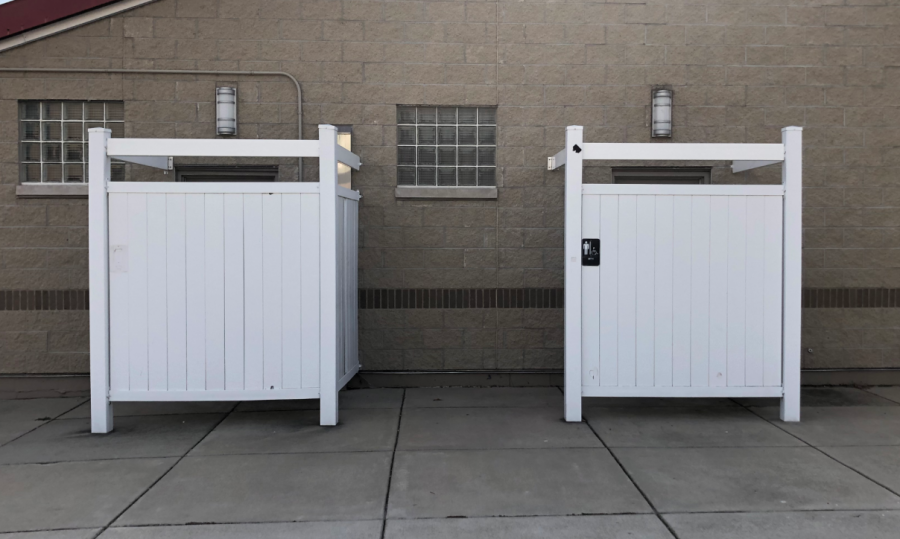 The sign on the entrance to the Memorial Stadium girls bathroom has been missing since at least Thursday.

A recent trend has infiltrated social media platforms and manifested itself into school buildings across the nation. The trend in limelight: devious licks.

On the popular social media platform, TikTok, a “lick” refers to a type of theft that results in an acceptable, impressive and rewarding payday.The word devious denotes craftiness behind the act. Together, these two words create the trend’s objective: steal whatever you can from school and don’t get caught.

Students “lick” a variety of objects, stealing minuscule things such as a stapler all the way up to something as ludicrous as a thousand-dollar projector.

At Central, though there are rumors of several licks, there are only two confirmed cases. In one of them, the victim was a bag of soap.

The student who took the bag of soap shares that it all started with a little bit of curiosity. After being exposed to the trend through social media, they asked, “how are people stealing all this stuff?”

Their question was soon answered while scrutinizing a soap dispenser in the school bathroom, where they saw that there were two buttons that, when pressed, opened the dispenser. Inside laid a vulnerable plastic pouch full of liquid soap. A few days later, they stole it.

Diving into the motives behind the theft, the student explains that what they did, being “the less extreme version,” was simply harmless fun.

In the end, “it’s just more the stupidity of it.”

After completing their lick, however, the student reflects on the bigger picture. “Kids are stealing such meaningless property, and that’s getting nationwide attention, versus, you know, actual problems at the school,” they said.

The student later clarified these issues to be problems such as bullying.

In the end, there are people who have to pay the costs of this trend. One is the maintenance crew.

Facility director Cuauhtemoc Zarate is familiar with the trend, and he also knows that it results in more unnecessary work for him and his coworkers.

“We’ve had to replace soap dispensers and broken paper towel dispensers,” he said.

There are many other forms of vandalism that have taken place in school bathrooms over the past few weeks.

Water leaking toilets and ink splattered walls. Theft may not be the problem at all, but devious licks have done one thing. It has built a bridge, sparking the idea of bathroom vandalism.

But the maintenance crew is intended to replace and restore items, and in return, is limited in terms of preventing future incidents, requiring attention from other school authority figures.

Whether it’s a lick or plain-out vandalism, school administrators plan to take action. James Tanksley, the school resource officer, and a dean have been inspecting the damage. In other schools, where things have gotten out of hand, there have been school-wide assemblies dedicated to lecturing students on the new trend.