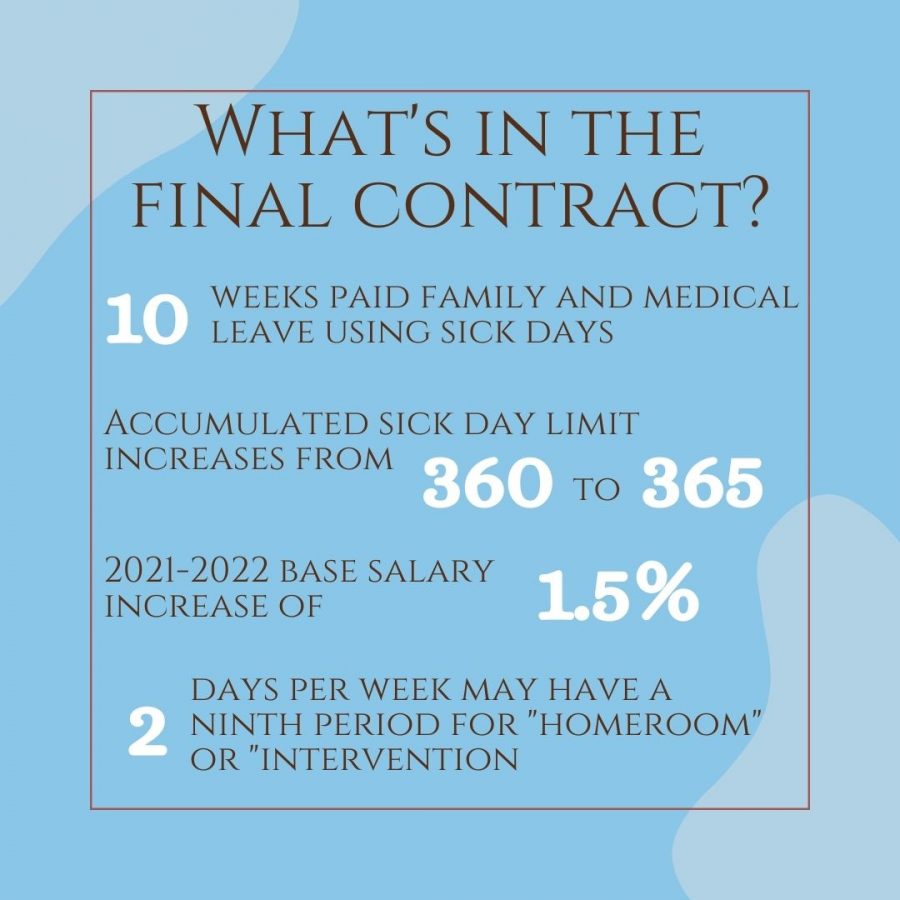 The District 203 Board of Education signed a new four-year contract with the Naperville Unit Education Association at the Sept. 7 board meeting, after the association approved it with an 86% yes vote.

The ratification wraps up nine months of negotiations which stalled in the summer and led to the appointment of a federal mediator and the NUEA’s initiation of strike proceedings. Both sides say they are happy with the provisions of the new contract, which includes compromises on family and medical leave and pay. It also increases the cap on total sick days teachers can accumulate over their career from 360 to 365 and provides one-time bonuses and retroactive pay increases.

“It’s a fair agreement that really strikes a balance between ensuring we’re able to financially reward and compensate our educators for the amazing work they do, but also being respectful of the taxpayers and financial investment the community has to make,” District 203 superintendent Dan Bridges said.

A new addition to the educator compensation system are “longevity” increases, which guarantee raises for the district’s most experienced teachers.

“Keeping up with inflation for the rest of their careers once they get all the way through the salary schedule is a big deal,” NUEA president Dan Iverson said.

The parties were also able to find middle ground on the issue of family and medical leave. Educators originally requested the option of using accumulated sick days to take 12 paid weeks off, though District 203 was unwilling to go beyond the six mandated by the Illinois school code. The final contract has bumped that number up to 10 weeks.

“We certainly want to be a family friendly, parent friendly organization for our employees,” Bridges said. “But we also know the more teachers are out of the classroom, the quality of education suffers.”

Paying substitutes to come in while a full time staff member goes on leave is another factor the district took into account, Bridges said.

The other big area of contention the NUEA prioritized in bargaining sessions was compensation for multi-tiered systems of support, an educational method that requires teachers to re-teach and reassess students on content or skill standards they do not master. The NUEA sees MTSS as a heavier workload for teachers. The district still disagrees.

Regardless, some increases to compensation were negotiated, though not enough to satisfy all teachers.

An underlying factor contributing to the district’s originally smaller package is a decrease in projected revenue for the district.

“We can’t base future costs off of the past,” Bridges said. “Interest income we earn off our investments are down significantly, and we depended on that. New construction is down significantly. We’re just not seeing the revenue coming in that we historically have seen.”

Some of the new language in the contract allows for MTSS time to be built into the high school day. Administrators can now designate up to two days with “homeroom” or “intervention” periods per week, for the purpose of offering support or extension to students. Naperville Central will transition to this type of schedule second semester.

With the NUEA and District’s negotiations at a close, one shared sentiment is clear.