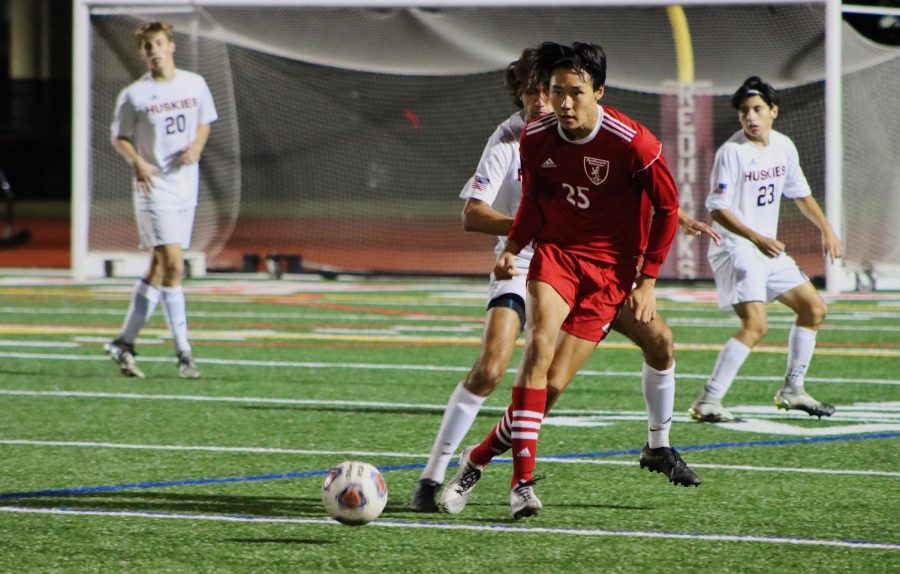 The Naperville Central High School varsity boys soccer team lost 2-0 to the Naperville North High School on Sept. 21 in Memorial Stadium. The Redhawks previously lost 2-1 to the Huskies in a Sept. 4 matchup during the Best of the West Tournament.

Senior Cameron Radeke scored both goals for North, one early in the first half, and the other as a penalty kick halfway through the second.

“We actually played pretty well,” Adams said. “At a certain level, sports comes down to execution. They did a better job of executing their game plan that we did of ours.”

Several Redhawk players, however, could not muster the same level of optimism.

“Something just didn’t click from the start and we really struggled to get back from then,” Central senior Johnny Kim, who plays center midfielder on the varsity team, said after the game. “I don’t think it really reflected our best performance because I think we have a lot of good talent, a lot of good players. We just weren’t playing our style.”

However, the Redhawks still put up a challenge for North’s team.

“We could have done a lot better tracking the midfield,” Radeke said. “Central left a lot of goals on the field that they probably could have scored.”

Moving forward, Adams says, the team has taken a lot away from this game that they hope to implement in future practices and competitions.

“We need to clean some things up,” Adams said. “We’ve got to be a little more efficient in the box. We’ve got to learn how to deal with the aerial balls that come out from their backs to their forwards. Hopefully we can clean those things up, and if we see them again in the playoffs, we can be better.”

While Central and North activities and athletics often maintain a healthy rivalry, both teams used this game as an opportunity to raise awareness and funds for pediatric cancer.

“We were raising awareness for pediatric cancer with the shirts, and the donations [go] to Lurie children’s hospital,” Adams said.