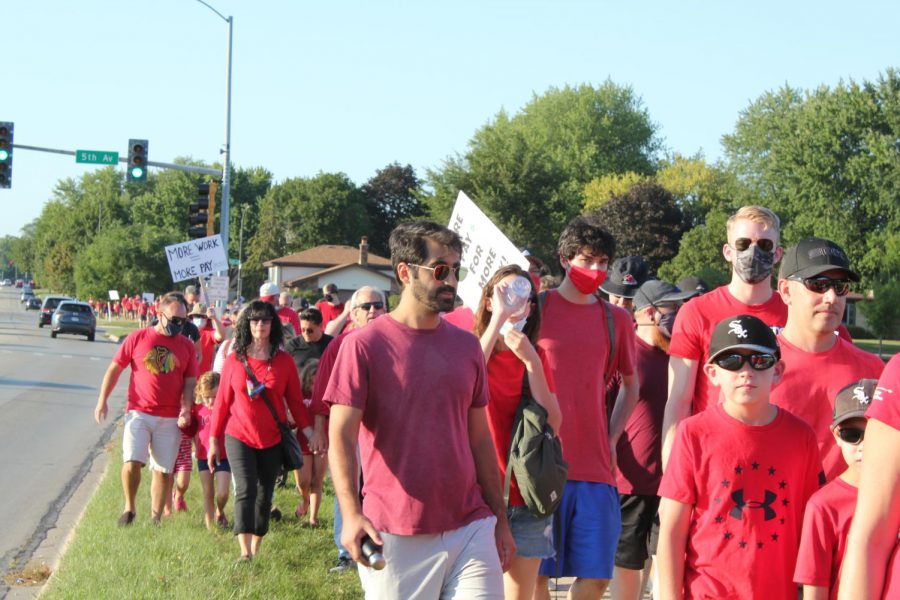 Educators, students and parents march from Naperville North to Washington Junior High in support of the NUEA's contract proposal on Aug. 16

Days before Aug. 19, the start of the school year, the Naperville Unit Education Association and Naperville District 203 have still not negotiated a contract. Looming over the impasse is a potential teacher strike if the parties do not reach an agreement soon.

Central Times supports the NUEA’s proposal with the district because it better balances the needs of teachers, students and the community.

The current discussion, which has largely been directed by the district, focuses on the potential strike, which cannot legally occur before Aug. 25. But to emphasize the strike and not the contract proposals misleads the community.

Both the district and union say they do not want to see a strike. Educators themselves cannot earn wages, and more importantly, teach students if one were to happen. The majority of stakeholders at District 203 recognize that further disruption to student instruction can have abysmal impacts, especially after almost two years of pandemic learning. This community agrees that a strike is the worst-case scenario.

But it can be prevented. One party must concede to the other so negotiations can conclude. In this case, it is the district’s burden to yield to the NUEA.

If the district’s proposal has merit, then administrators and the Board of Education have defended those merits poorly. They have declined interviews from the Central Times about these negotiations, limiting in-depth, open discourse in the community. The district needs to clearly explain to the public the reasoning behind their stances if they expect any concession from the NUEA.

On family and medical leave, the district has offered eight weeks of paid leave to care for newborn babies, newly adopted children or ailing family members, or 12 weeks if a mother is recovering medically from childbirth.

They, however, have stayed silent on why their proposal is better than that of the NUEA, which wants their accumulated sick days to supplement the 12 weeks of leave protected under the Family and Medical Leave Act.  Using the union’s method would change total costs marginally, because any sick days allocated to family leave cannot be used in the future. It also allows teachers to devote more time to caring for family without having to worry about their financial situation.

Regarding multi-tiered systems of support, which requires teachers to reteach and reassess students who do not grasp a certain content or skill standard, the district contradicts itself on whether or not this program requires more work and more pay.

While the district says they hired 28 additional staff to fully relieve educators’ workloads, this is actually an admission that MTSS inherently requires more time and effort. Realistically, however, 28 additional staff cannot offset the additional burden that more than a thousand educators would experience. If the district wants more time and effort from teachers, it’s only fair to compensate more.

When it comes to salary raises, the union’s proposal better ensures the financial security of younger and older teachers. The cumulative salary increases District 203 has communicated include raises from step and lane changes, which are the raises educators receive for garnering experience and credentials, respectively.

With the district’s proposed base pay changes, however, projected inflation outpaces the salaries of veteran teachers at their step and lane caps. New teachers arriving at this district will also have less buying power than in years past.

District 203 uses the term “fiscal responsibility” as the foundation for its positions on these three issues. Yet, they refunded taxpayers $10 million last year. They ran budget surpluses for the nine years before 2021, most of which exceeded $1 million, so current revenue streams could cover cost differences like the projected $690,000 between salary schedules for the next three years. Most importantly, they must balance fiscal responsibility with meeting teacher and student needs.

For a final, catch-all claim, the district says it is common for teachers to work without a contract. It is possible to kick the can down the road, but procrastination does not change the issues at hand. Whether in a day or a week, the agreement must be signed. Why not do it earlier?

The Naperville 203 community is exhausted from the pandemic, which continues to affect everyday life. They do not need a contract that lasts four years to put unnecessary burdens on educators.

There is still time before the start of the school year for both sides to reach an agreeable conclusion. Students, parents and community members can call and email administrators and Board members to voice their concerns. Only public solidarity can best bring necessary progress.

Naperville 203 hasn’t seen a teacher strike in 30 years. The NUEA’s over 95% vote to authorize a strike thus speaks volumes about how necessary signing their proposal is. Because teacher needs are also student and parent needs, the district’s administration and Board of Education should accept the NUEA’s contract proposals to properly serve their constituents.