Teachers’ union, district at impasse on family leave and compensation 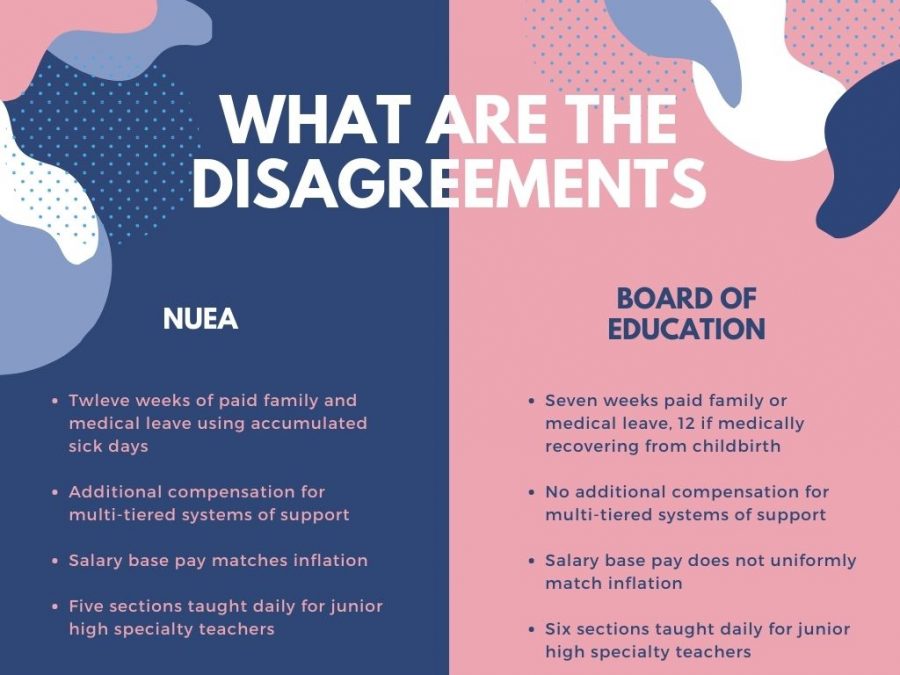 The Naperville Unit Education Association and Naperville District 203 have yet to reach a negotiated settlement for the 2021-2022 school year set to start Aug. 19. Both parties’ contract proposals were filed with the Illinois Education Labor Relations Board on July 29 for public posting.

After filing, both parties have taken their message to the public. The Board updates the community through Talk203, and posted a presentation July 29 about their proposal. The NUEA held a rally on Aug. 2 aimed at garnering community support for the union’s proposal and breaking the current stalemate.

Primarily, the standstill in negotiations stems from disagreements about paid leave and compensation.

While representatives of both NUEA and the district began negotiating this contract in December 2020, many of the disagreements stalling its completion have been bubbling for three years, said NUEA president Dan Iverson, who taught social studies at Naperville North for 25 years.

“We negotiated a one-year extension because the Board had wanted to extend the school day,” he said. “Then the Board decided not to.”

This was followed by another one-year extension to account for the uncertainties created by the COVID-19 pandemic.

Typically, these negotiations end by May, and both sides sign contracts at the end of the school year.

This year is different.

A federal mediator was assigned to the negotiation sessions between the two parties in early June, tasked with trying to bring both sides closer together. But talks have continued past the June 30 expiration of the existing contract. The negotiating teams continue to meet multiple times each week in an effort to reach a settlement before the school year begins.

In addition, a vote to authorize a strike opened for NUEA members on Tuesday and will close Sunday night, though the union hopes to avoid a strike unless they deem it absolutely necessary, said Dave Carroll, chair of the NUEA’s crisis and communications committees.

Central Times contacted Board president Kristin Fitzgerald, Board member Donna Wandke and Bob Ross, chief human resources officer for District 203, all of whom declined to comment on the following issues beyond referencing official resources the district has published and presented at its Monday meeting.

The Family and Medical Leave Act, a federal law, requires employers to allot up to 12 weeks of unpaid leave if an employee has a child, adopts a child or must care for a sick family member. Under the current Illinois School Code, six of those weeks must be paid.

NUEA, citing a national shift, wants employees to have the option of using their accumulated sick days, of which they receive 15 annually, to supplement the other six weeks off. Currently, the district does not allow employees to use accrued sick days for paid FMLA leave.

Teachers believe they should have more control over how they use their paid sick days.

“I’m seven months pregnant right now,” said Lindsey Stevenson, a Naperville Central science teacher. “So to me, being able to take 12 weeks of my sick time is really important.”

For its part, the district has offered an increase of five additional days, which would extend paid family or medical leave up to seven weeks, according to information included in the proposal it shared with the public. If an employee is incapacitated from childbirth or recovering from that incapacitation, they may take all 12 weeks paid.

Update: The district has increased its offer to eight total weeks of paid FMLA leave for non-medical reasons, Fitzgerald said at the Aug. 16 board meeting.

The district also wants to expand its implementation of multi-tiered systems of support, an educational method that requires teachers to re-teach and reassess students on content or skill standards they do not master. Teachers agree with administration that this process, frequently referred to as MTSS, is worthwhile and important for students.

But to do so, the union says, teachers should receive more compensation.

“That takes time away from classroom instruction,” Iverson said. “You’re adding another layer of planning and data interpretation.”

During his speech at Monday’s rally, Iverson called MTSS “a hell of a lot of work.”

The district’s position is that MTSS is not work that requires more pay beyond regular raises and increases in benefits. They have also hired 28 additional staff to balance the program’s workload. The union does not buy that response.

“If MTSS is no more work, why would you hire 28 extra people?” Iverson asked.

Aside from those two areas of contention, the union is also concerned about base salaries not keeping up with inflation.

“This current salary for a brand new teacher has less buying power than 10 years ago,” said Kyle Adams, a member of the NUEA bargaining team and Naperville Central teacher. “Our current offer across four years does not have 100% of CPI (consumer price index, another way to measure inflation), keeping in mind fiscal responsibility.”

In District 203’s July 26 presentation about its proposal, total salary increase rates for the next three school years are 3.51%, 2.85% and 4.37%, all above inflation estimates the Wall Street Journal reported in July.

However, there is a distinction to be made between base and step increases in salaries, the union argues. Step increases reward teachers for more years of experience with higher salaries.

“The salary schedule was never meant as this cost-of-living mechanism,” Iverson said. “It’s meant to honor longevity: this idea that a 28-year teacher is better than a first year teacher.”

Using an estimated 3.2% inflation rate for 2022 and 2.3% for 2023 and 2024, inflation will outpace teacher base salaries by about 3.4% after the first three years of this contract. This mostly affects new teachers, who start at a “step zero,” and older teachers capped at step 23, because they receive only a base increase, not a step increase.

There is also a disagreement about how to calculate total salary costs for the district. The union takes into account two additional variables that the district does not: lane changes and retirements.

When an educator passes certain certification thresholds, for instance, earning their master’s degree, they “change lanes,” which results in a pay increase. Lane changes result in higher costs for the district.

Retirements generally decrease costs for the district, as retirees are usually the highest paid educators. They are replaced with personnel who start at step zero, with much lower salaries.

While NUEA assumes 24 retirements and 25% of educators changing lanes annually, the district assumes the two factors cancel out, not taking either into account. As a result, the two parties have produced different cost estimates.

Additional contentions remain on the negotiation table. For instance, the union wants to uniformly increase personal days for teachers from two to three, something the district is unwilling to do.

Furthermore, NUEA wants to increase the cap on total sick days, which educators can save yearly, from 360 to 370. For now, the district is willing to increase it to 365.

At the junior high level, specialty teachers—those that teach music, family and consumer sciences, Project Lead the Way, art and foreign languages—are required by the district to teach six sections a day. The union hopes to decrease that number to five to provide equity with the workload of all core subject junior high teachers. This disparity does not exist at the elementary or high school levels.

The next negotiating session is scheduled for Monday, Aug. 9. Central Times will continue to follow this story.

Luka Sereci contributed to this report.