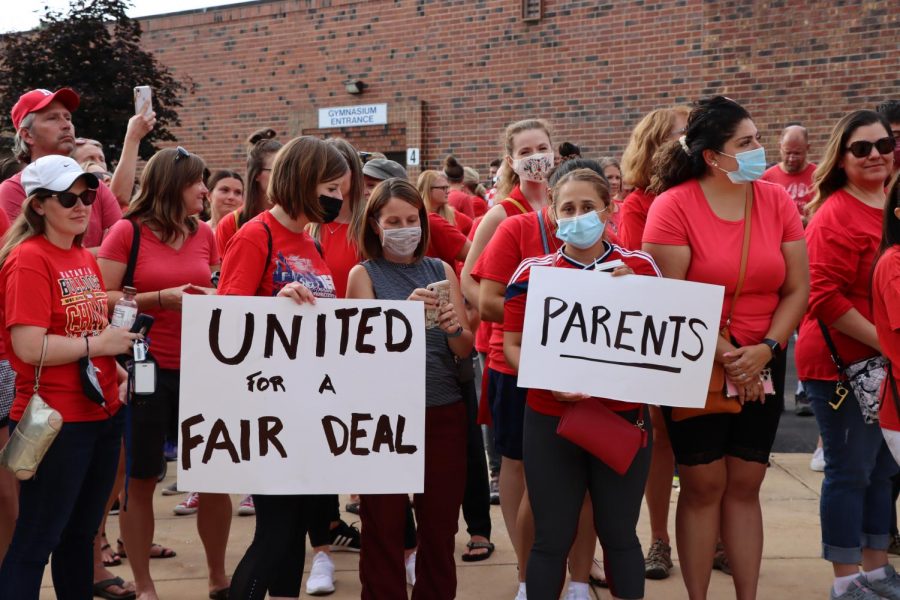 Educators, parents and students rally outside of the Washington Junior High School main entrance in support of the Naperville Unit Education Association's contract proposal on Aug. 2.

Hundreds of Naperville Unit Education Association members rallied Aug. 2 to gain ground in contract negotiations with District 203 administration and its Board of Education.

The demonstrators, wearing red in support of the association, gathered at Naperville North High School Monday evening before marching to Washington Junior High School, where the Aug. 2 Board Meeting was scheduled to begin at 6 p.m.

“We’re here because we don’t have a negotiated agreement,” he said. “We need to get one.”

The rally’s purpose, he said, was to garner community support for subsequent negotiations and break the stalemate, as the school year begins on Aug. 19, just a few weeks away.

“We have to change the narrative when we go into the negotiation room,” Iverson said. “We need a unified community response.”

Former NUEA presidents Diane McGuire and Dave Griffith also spoke to the crowd before their departure from the Naperville North parking lot.

“Teachers: America’s largest construction crew; that’s who you are,” McGuire said. “You absolutely deserve everything you’re asking for and more.”

Griffith pointed to prior experience, referencing strikes in 1971 and 1991.

“There’s a common theme among the Board: that is to devalue your service,” he said. “There is only one group of people that can protect your service: each and every one of you standing here today.”

The demonstrators marched down Mill Street, reaching Washington Junior High around 5:30 p.m. They lined both sides of the school’s main entrance, waiting for administrators, Board members and spectators to arrive. Students and parents also arrived to show their support.

“They have been invaluable, especially with the pandemic,” said Kimberly Nierman, a district parent. “We should pay for their value. I think the district doesn’t want to pay them what they’re valued, and it’s just not fair.”

Central Times reached out to Board president Kristin Fitzgerald, Board member Donna Wandke and Bob Ross, chief human resources officer, about District 203’s position on the rally and contract negotiations. All three declined to comment, instead pointing to the district’s official communications.

“The Board of Education values and respects the Naperville 203 teachers,” the district announced in a July 27 message. “As taxpayers, the Board is also committed to ensuring that the contract agreement reached is fiscally responsible and preserves the long-term financial health of the District.”

Some students say the Board is not doing enough to reach a fair agreement with NUEA.

“The responsibility lands on the board,” said Bianca Cima, a rising sophomore at Naperville Central. “It’s their responsibility to accommodate for the needs of the teachers, since they are raising the standards for them.”

While union leadership hopes the rally’s size and diversity conveys urgency and solidarity to the Board in further negotiations, they have not ruled out the possibility of a strike at the school year’s start, Aug. 19. A vote to authorize a strike opened Tuesday and will close Sunday night.

“There [may] be an authorization but not a declaration, unless we absolutely have to at the last minute,” said Dave Carroll, chair of the NUEA’s crisis and communications committees. “We’re planning for the worst, but hoping for the best. We have to be prepared.”

Luka Sereci contributed to this report.