Girls soccer back strong after losing a season 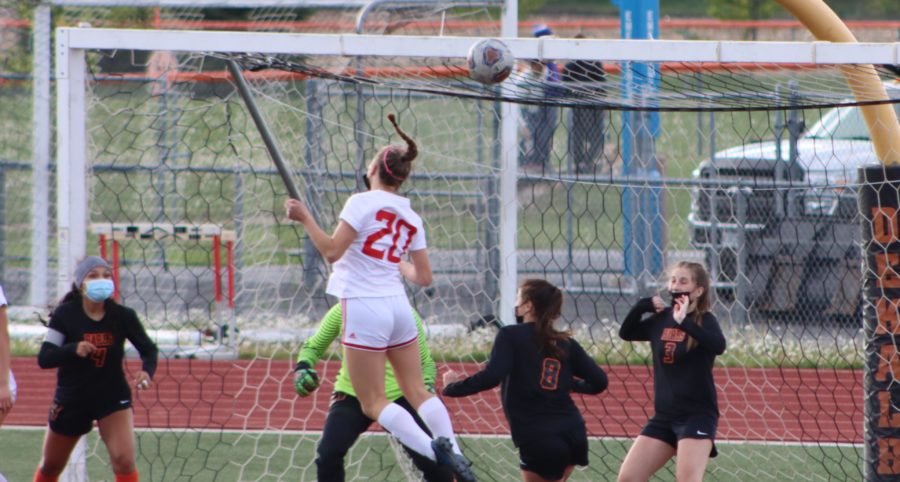 Sophomore varsity center back Ella Burke buries a header into the goal off of a corner kick from junior varsity outside back Sam Sharp against DeKalb High School on May 4.

In May of 2020, Central Times ran an article on how girls soccer continued to train despite quarantine restrictions.
At that time, pandemic fear was high and not much was known about the virus. Just as the team was preparing to play their first game, the rest of the season was cancelled due to COVID-19.
One year later—still in the midst of the pandemic—girls soccer has resumed with changed operations and changed attitudes.
“We normally have four levels in competition,” said Edgar Watson, the varsity girls soccer head coach. “There were still some parents and players considering whether they wanted to play or not, so we constricted and we only had three levels this year.”
The three levels were varsity, varsity reserve, and junior varsity one, with the freshman/sophomore level being taken out due to less participation this season.
Emma Irle, a senior on the varsity team, said that there were some changes to the season’s schedule as well.
“Usually we start in February, but this year we started in late March,” she said. “Our season has been condensed, [with] more games a week. Nobody really knew what to expect besides the five people that played [on varsity before].”
Despite the cramped schedule, players are required to be spaced out as much as possible. The athletes need to wear masks and social distance during practice, according to junior Molly O’Rear, who plays on the varsity team.
Usually the team engages in several team bonding activities, such as pasta parties, but they haven’t happened this year.
“We’re trying to make sure we don’t get shut down. That’s the number one priority for us,” O’Rear said.
Still, the girls soccer team hasn’t let the pandemic bring their spirits down—in fact, they’ve returned to the field stronger and more excited than ever. The redhawks currently have a record of 5-0-2 in the DuPage Valley Conference.
According to Irle, Naperville Central’s varsity girls soccer team hasn’t beaten Naperville North’s team in seven years. But this year, they tied at their game. “It was a huge ‘wow!’ moment and it gave us a lot to look forward to for the rest of the season,” Irle said. “[Now it’s so exciting] to come to our games, since we’re at the head of our conference.”
O’Rear echoed this sentiment.
“Our first game versus [Normal High School] was pretty cool. Everyone was pumped and everyone played pretty well,” she said. “I was very proud of the team.”
The varsity level team has had a great record this year, Watson said.
“We’ve been pretty successful as of late,” he said. “Our last game, we scored three goals, the game before we tied 1-1, [and] we had scored four the game before that.
“In a game of soccer, if you can score two or more, you have a really good chance of winning games,” he added.
This wasn’t the way that Irle, who is heading to college next year, had thought she was going to wrap up her high school soccer career, but in the end, she still got to play on the team.
“Nobody really expected COVID, but I [still played] soccer this year,” Irle said.
The team is glad to have had a season this year.
“This year has been truly special for so many reasons,” Watson said. “I’m really happy for our seniors this year to finish their careers on the field.”
The season is expected to conclude at a state tournament starting on June 2.