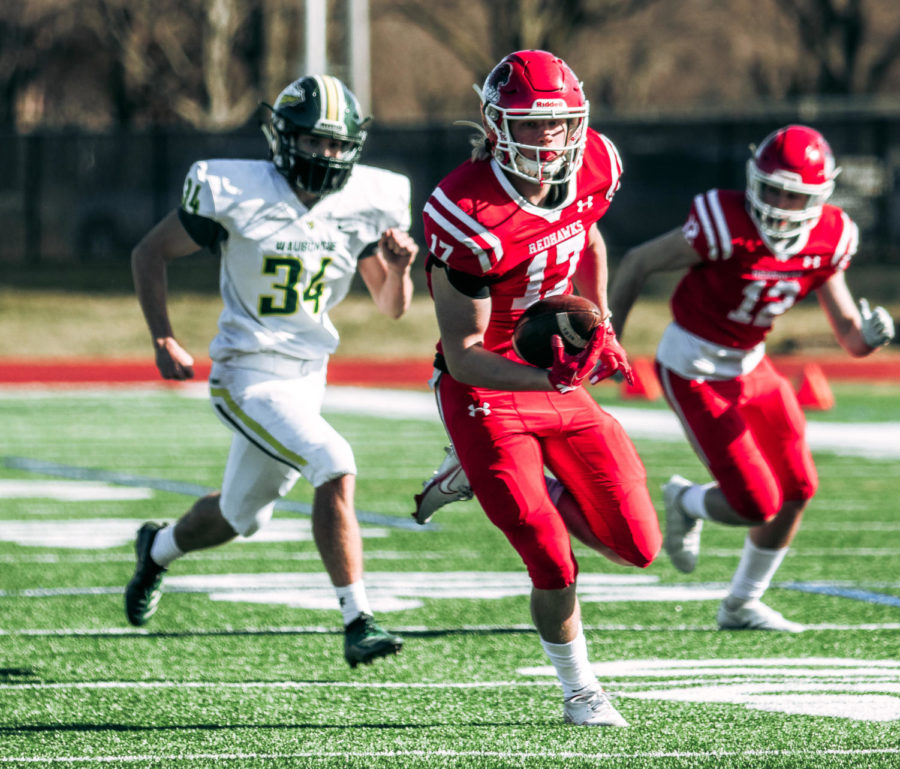 Junior wide receiver Luke Roy shakes off the defense in a game against DVC rival Waubonsie Valley on March 20.

The Illinois High School Association, which governs interscholastic athletics and activities in the state, has levied sanctions against the Naperville Central football team for violating association by-laws regarding athlete transfers.

IHSA Executive Director Craig Anderson says Central violated section 3.041 of the IHSA bylaws, which requires the principals of both schools to sign off on a concurrence form of transfer when a student athlete migrates from one school and team to another as a result of a change in residence. This process must be initiated by the “receiving” school, but Central failed to do so for a number of students. The IHSA has determined that at least five ineligible players regularly competed for the Redhawks during the last three seasons.

“Had the concurrence forms been completed, a number of things would have been pointed out, [like] concerns from the sending school, that would have necessitated a ruling from our office,” Anderson said. “Additionally, we believe that there were some students … competing that didn’t meet the residence bylaw.”

The residence bylaws, outlined in section 3.03 of the IHSA bylaws, requires an eligible student to have lived full time in the boundaries of a school with a legal guardian. The student athlete must also have attended that school or district for a period of time before they become eligible to play, the specific length of which depends on their circumstance.

Naperville District 203 launched an internal investigation into these violations on April 19 and issued a press release on May 26 acknowledging that “the violations have resulted in the forfeiture of Naperville Central High School football games encompassing all wins in the 2018-19, 19-20 and 20-21 seasons, totaling 17 competitions in which ineligible players participated.  At least one ineligible player competed in basketball games during the 18-19 season resulting in an additional 4 forfeited games.”

The district’s internal investigation was prompted by concerns brought up by a fellow DuPage Valley Conference school to the IHSA and Naperville Central administration early in this year’s spring football season about a recently transferred student playing against his former team.

“We got confirmation from Naperville Central administration that in fact the student hadn’t completed a concurrence form,” Anderson said. “At that point, I deemed that particular student ineligible, [and] had the school forfeit the contest that that student had played in.

“When that ruling was sent back to the school, I think it created an awareness within the district that ‘maybe we should check into… some of these other transfer students.’”

Anderson says that the violated bylaws regarding athlete residence, transfers and eligibility are created by member schools in students’ best interests.

Central Times reached out to principal Bill Wiesbrook, who, along with other district administrators, has declined to comment because of the ongoing nature of this investigation.

Superintendent Dan Bridges, in the district press release, called the violations “unacceptable,” adding: “Naperville 203 and Naperville Central High School assume full responsibility for the errors and the subsequent punishment outlined by IHSA. We apologize for the negative impact on the student-athletes, families, and community.”

Central Times will continue to update this story as it develops.