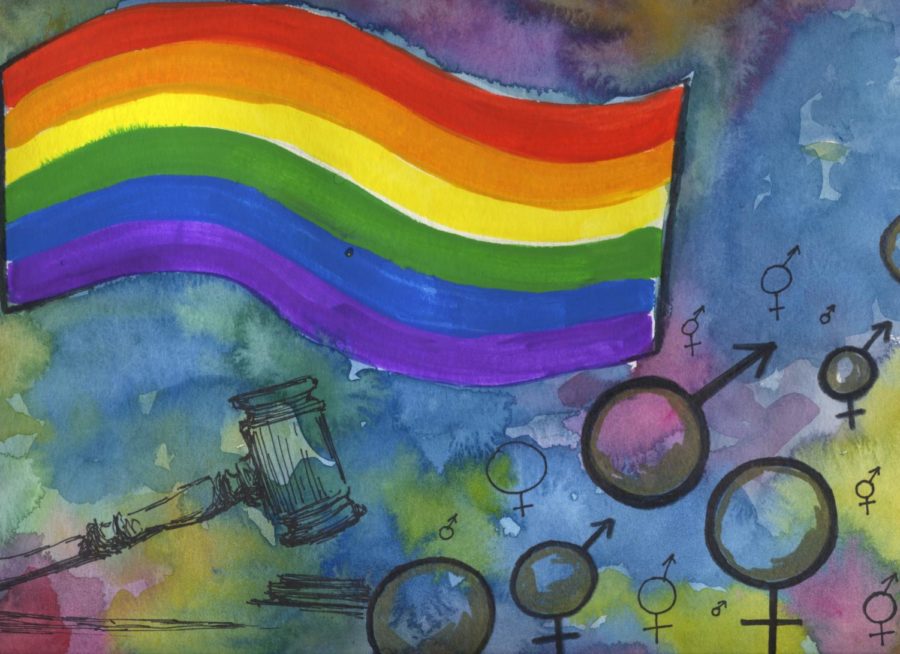 “The practice of sport is a human right.”

This is one of the Fundamental Principles of Olympism included in the Olympic Charter, a document that the American Bar Association refers to as the “constitution” in the world of sports.

And yet there has been a recent flood of proposed legislation that directly violates this human right of thousands of young transgender athletes across the country.

As of now, 31 states have introduced bills that ban trans youth from participating in K-12 and intercollegiate sports teams that are consistent with their gender identities. In seven of these states, Alabama, Arkansas, Idaho, Mississippi, South Dakota, Tennessee and West Virginia, such bills have already been signed into law.

In most cases, the bills specifically prevent trans women from participating on women’s teams because of a supposed “biological advantage” over cisgender women. Laws would force them  to either play on men’s teams or to not play at all.

First of all, the fact that the majority of the proposed legislation targets trans women but doesn’t address trans men joining men’s teams, because they are seen as “biologically female” and therefore not “real” competition, is in itself cissexist (of the belief that cisgender people are more valid than trans people within their gender identities).

Moreover, the idea that trans women have some sort of competitive advantage lacks any scientific evidence and perpetuates already rampant discrimination and transphobia. This alleged  advantage has been attributed by sports authorities to testosterone (T) levels, which are typically higher in those assigned male than those assigned female at birth. But this hormone doesn’t inherently make a better athlete, and there is data to prove it.

As Dr. Katrina Karkazis and Dr. Rebecca M. Jordan-Young explain in their article “The Myth of Testosterone,” “Even the International Association of Athletics Federations’ own analysis of testosterone and performance, involving more than 1,100 women competing in track and field events, shows that for six of the 11 running events, women with lower testosterone actually did better than those with higher levels. In other words, for most sports, testosterone levels do not correlate with superior performance.” Further, women with androgen insensitivity syndrome, meaning that their cells do not respond to testosterone at all, are actually overrepresented in elite women’s athletics. It is clear that T doesn’t define athleticism.

This theory of an unfair advantage is partially rooted in a widespread misunderstanding of T and all of its functions. T is commonly mischaracterized as the “male hormone” while estrogen is commonly mischaracterized as the “female hormone.” But in reality neither hormone is sex-exclusive. As Dr. Katrina Karkazis explains in her article “Stop talking about testosterone,” “the hormones are critical for bone development, heart function, and liver metabolism – functions that have nothing to do with sex difference.” She further explains that “to reduce sex to a single trait is to profoundly mischaracterise decades of research into sex biology. The science is clear: there is no single physiological or biological marker that allows for the simple categorisation of people as male or female.”

“We are starting to get to a point where gender is a very basic tag you kind of throw on a person that doesn’t really have that heavy intrinsic meaning that it used,” said a trans student at Central who requested anonymity. “Girls aren’t defined to be one way and boys aren’t defined to be another way. If you are portraying to the world that you care enough to be viewed the other way, and going through all the difficulty associated with that, I feel like that identity should be a little bit more respected and valued.”

These discriminatory state bills also completely disregard the fact that not all women with elevated levels of T are trans. About 10% of women have polycystic ovarian syndrome, which causes testosterone levels to be higher than the typical range. The new laws still allow these women to play on women’s teams. But some trans women, on puberty blockers and with  negligible T levels, would be banned from women’s teams. It’s a clear double standard.

T simply shouldn’t be used as a measure of who is allowed to compete and who isn’t, period. Take the case of cisgender South African track star Caster Semenya. Semenya has naturally elevated T levels due to a difference in sex development (DSD). By imposing a regulation on T levels on elite female athletes in 2011, the International Association of Athletics Federations forbade her from competing unless she artificially lowered her T levels to the regulated amount of five nanomoles per liter of blood. There are numerous reasons why this is absurd. For one, why does no such regulation on T exist for elite male athletes? Somehow if a female has higher levels of T it is an “unfair advantage,” but when males have higher levels of T it is still a level playing field. These types of policies are so obviously sexist and serve as an invitation for gender policing. They allow officials to force women who want to compete to change their natural bodies because society deems them, without any scientific basis, “too masculine” to be women.

To address what is unfair about trans women playing on women’s sports teams, let’s focus on stripping trans women of their right to play on the premise of “bogus biology” and bigotry, and legislation that further marginalizes an already marginalized community that suffers from some of the highest rates of bullying, depression and suicide. These new laws will make our trans youth feel even less comfortable expressing themselves and will inevitably make these rates worse.

“No one else has to make the choice of sacrificing who they are for their sport and it hurts a little bit that we have to,” said the anonymous student. “Younger trans athletes would really have to think about the consequences of coming out. That’s already one of the hardest parts about coming out, thinking about what you’re going to lose. So to add another thing like sports on there it just makes the process even harder.”

In addition to the emotional toll the legislation have on trans youth, our cisgender youth will grow up learning that discrimination is warranted and diversity doesn’t hold value, perpetuating not only transphobia and homophobia in our future generations, but also racism and sexism.

If “the practice of sport is a human right,” let trans women play.