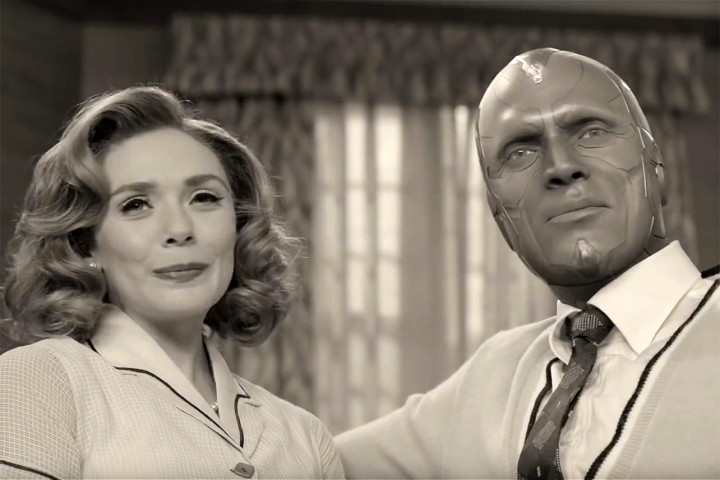 "Wandavision" is currently streaming on Disney+.

Disney released the first of its Marvel TV series, “WandaVision,” kicking off with two episodes on Friday, Jan. 15.

I’ll admit, I’m not a huge fan of Wanda’s character, particularly because of her role in causing the catastrophic chain of events in “Avengers: Age of Ultron,” “Captain America: Civil War” and “Avengers: Infinity War.” Despite my dislike of Wanda, this show intrigued me. It starts completely in black and white and has a very different feel from any other Marvel content. The first episode gave me a very “I Dream of Jeannie” or “Bewitched” vibe, for those of you old timers. I am firmly against the idea of using a laugh track or faked “aws,” but in this case the laugh track in “WandaVision” actually added to the feel of the show. This tone will likely change as the story develops and becomes more like a superhero show.

Elizabeth Olsen, who plays Wanda, and Paul Bettany, appearing as Vision, do a wonderful job of bringing the show to life. Their roles in the show are very different from the previous Marvel Cinematic Universe (MCU) movies that they appeared in. In “WandaVision,” they are a quirky married couple who are new to a neighborhood that they desperately want to fit in with. Wanda and Vision’s powers are a source of comedic relief rather than crime fighting.

Considering that Olsen will be appearing in “Doctor Strange 2,” it is likely that “WandaVision” is a way of setting up the storyline for the upcoming movie. Connections to other areas of the MCU have been cryptically hinted at throughout the two episodes. I am sure that when the series is over and I rewatch it, these clues will make more sense.

Last year was an unprecedented year for Marvel. For the first time since “Iron Man” came out in 2008, the blockbuster giant went a whole year without releasing any new movies. Since theaters are still not open, it is up to streaming platforms such as Disney+ to put out new content. This year should be an exciting time for Marvel fans, with “WandaVision” coming out this month and “Falcon and the Winter Soldier” releasing in March.

Thus far I would give “WandaVision” a 7/10, but I am very excited to see where this show will lead and how it will tie into the rest of the ever expanding Marvel Cinematic Universe. This show is available to watch on Disney+ and new episodes release every Friday.