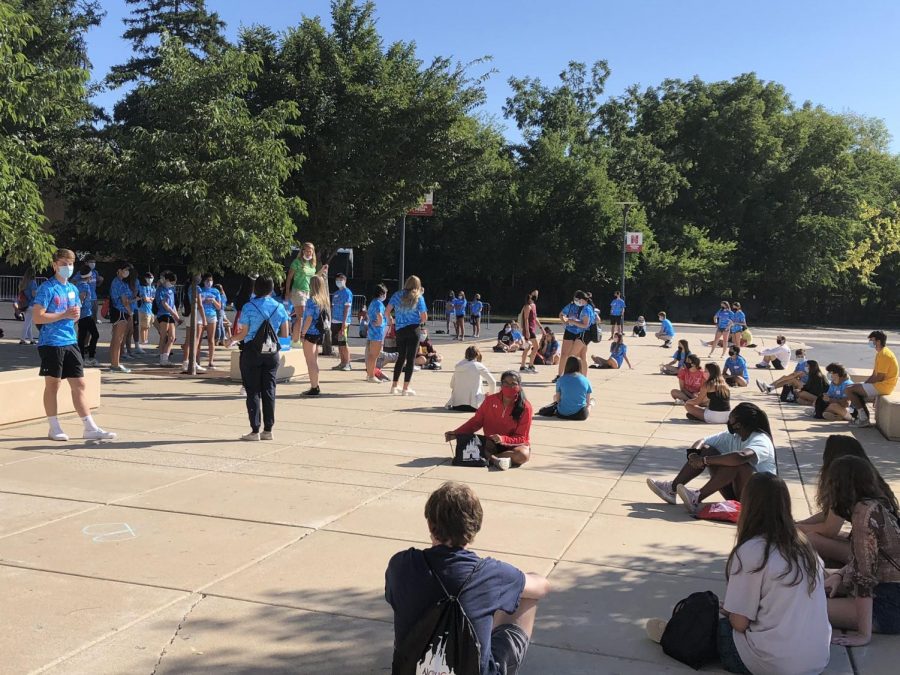 Socially distanced Link leaders and freshmen wait to be separated into groups during the Aug. 20 freshman orientation at Naperville Central.

Naperville Central freshman Anagha Nittala didn’t know exactly what to expect for her first year of high school, but between e-learning and pandemic restrictions, it has been a surprising and difficult adjustment.

“I didn’t really have a vision of how high school’s going to be; I heard it was going to be a step up with work and academics,” Nittala said. “I didn’t think high school for me would start [with] me talking into a computer.”

Most staff and students at Central are having a rough year, but making the transition from junior high to high school has been particularly challenging for this year’s freshmen, the Class of 2024.

“There is a disconnect,” said Jeromy Bentley, who teaches Honors Chemistry, a class of primarily freshmen. “One of the most important things for them is to feel like a part of the NCHS community, and that’s hard because it’s fractured right now. For some of them, they haven’t even stepped into the building.”

Earlier In the fall, with nicer weather and a more optimistic mindset, administrators tried to create opportunities for students to get acquainted with the school.

“We got off to a great start when we did the [freshman] orientation outside,” Dean of Student Activities Lynne Nolan said. “We had 520 freshmen attend in person and another 60 attend our virtual orientation.”

Initially, with the full day school schedule, Link Crew, which Nolan sponsors, could also run at its normal lunch period times. But getting it to work in an online environment had its own set of challenges. Sessions began with prerecorded whole group videos so staff running the meetings could sort hundreds of freshmen, listed on the Zoom call alphabetically by first name, into traditional-size Link groups.

There was also widespread confusion among participants about expectations for student attendance.

“We had freshmen not sure that they needed to show up,” Nolan said. “We were chasing down kids who didn’t attend so they would get the information. We would have make up sessions, which seems like one more thing to do when kids are already navigating one more thing to do.”

With the block schedule put in place Oct. 19, Link had to drastically adapt again.

“We did five days of optional tours,” Nolan said. “Freshmen could sign up, and Link leaders came to do the tours. We had 220 [of about 600] freshmen participate.”

For the time being, routine Link sessions have been put on hold, but some events are in the works.

“[We’re] encouraging our Link leaders to reach out to their freshmen via email,” Nolan said. “Our Link leaders will be ready to go when we come back to campus.”

No official decisions have been made at this time about if and how Link will occur for freshmen returning to the building next semester.

In addition to the orientation, Link meetings and in-person tours, Student Activities has tried to set up other community building experiences, like minigolf in the Honor Garden and trivia nights, but many freshmen weren’t motivated to participate.

“I’ve heard about them, but they didn’t really intrigue me,” freshman Danny Vogel said. “I’d rather go to the park and play basketball.”

Staff and students are also concerned about the lack of familiarity with routine facts of high school life that freshmen haven’t been exposed to because of e-learning.

“Central is a lot bigger of a school, so I have to learn how to navigate,” Nittala said. “Next year, walking the halls is going to be weird, because the 10th graders are going to be lost.”

It’s also been harder to prepare freshmen for the rigor of high school courses.

“Tests and quizzes are worth more, and this is the first time they’ve been exposed to final exams,” Bentley said. “I don’t get a lot of those nonverbal cues like I normally would.”

“I’m really relying upon what I’m witnessing, watching their eye movements and watching what they’re saying or doing,” Bentley said.

On the social front, freshmen have mostly spent time with friends from junior high outside of class time. Interacting with new peers is more difficult to do given the circumstances.

“We go to play at a nearby basketball court quite a bit; all of us are wearing masks,” Vogel said. “I wouldn’t say [I’ve made new friends] through online classes, [but] maybe through sports and being able to go to the school and participate in camps.”

The lack of natural social interaction during classes is partially  due to instructors trying to maximize the amount of content being taught.

“You go [into] a breakout room and you start talking, but you have a set agenda,” Nittala said. “You’re not talking informally.”

Most freshmen understand and are appreciative that staff members are working hard to overcome the challenges of e-learning and make them feel welcome.

“They’re always there to help,” Nittala said. “Office hours really help, academically and mentally. I [know] that if I had any troubles with school I [can] go talk to my teachers. Just to know that they’re there [is] really helpful.”

For the rest of the school year, only so much can be done to help integrate the class of 2024 while adhering to safety guidelines during the pandemic. Much of the transition to high school will have to be conducted when things more or less return to normal.

“The COVID prison situation right now is the norm, unfortunately,” Bentley said. “Next year — and hopefully everything goes ok — if we’re all back in session in the fall, we’re going to have two sets of freshmen: the freshmen and the sophomores.”