Amid pandemic restrictions, half of Naperville restaurants fear closure in 5 months, survey says 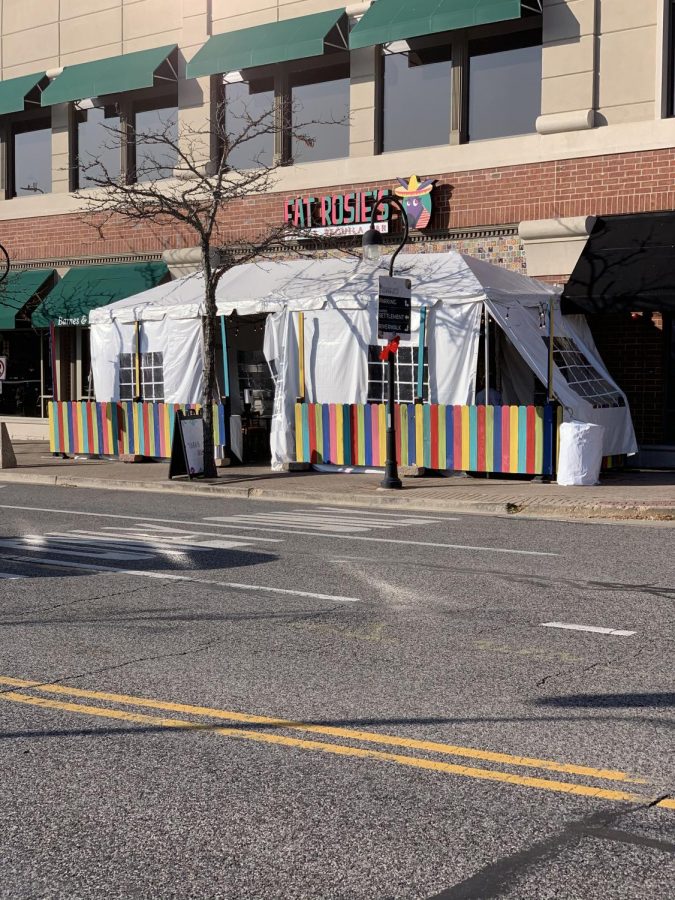 Many local businesses, like downtown restaurant Fat Rosie's, are looking for ways to weather the new restrictions' economic effects.

After COVID-19 positivity rates remained higher than the eight percent threshold set by the state despite Tier 2 mitigation efforts, Gov. J. B. Pritzker ordered Tier 3 restrictions for all of Illinois that took effect on Nov. 20.

For businesses, these restrictions include a ban on indoor dining, a cap of 25 people for any gatherings, and the closing of theaters, museums and casinos. Retailers and personal care services can continue to operate at 25% capacity while grocery stores and pharmacies will be capped at 50% of their maximum capacity.

The Naperville Area Chamber of Commerce (NACC) conducted a survey in late October to investigate the impact of the previous indoor dining ban announced by Gov. Pritzker on Oct. 28.

“This survey underscores that [Naperville] restaurants & bars are near their breaking point,” NACC Director of Government Affairs Reba Osborne wrote in a press release. “Most of them are small business owners who do not have large amounts of capital to keep them floating through rough times.”

Naperville has set aside $100,000 to offer grants of up to $5,000 for small businesses affected by COVID-19. Grant recipients will be determined through a lottery system.

“This new grant funding provides another form of support to our small businesses as they do their very best during these challenging times to stay afloat,” Naperville Mayor Steve Chirico said in a news release.

Restaurants have also been offered support from the Naperville Public Works Department.

“We’ve been working with our restaurants…to provide them with a path to continue to stay open by using public spaces, by waiving permit fees [and] permit inspections, putting up tents or tables, by allowing outdoor dining,” Chirico said.

In response to the indoor dining ban that went into effect on Nov. 4, Mayor Chirico wrote to Pritzker two weeks ago.

“Restaurant owners know how to safely operate,” Chirico wrote. “The sad truth is, however, that many of these small businesses did not survive the first ban on indoor dining and many more will not survive this one.”

In an interview with Central Times, Chirico voiced concerns over whether the governor’s orders were focused in the right place, citing the DuPage County Health Department.

“Almost 80% of deaths in Naperville are from long term care facilities,” Chirico said. “Instead of focusing on [restaurants and bars] where less than one percent of the outbreaks have been found, [Pritzker is] focusing on that and not on long term care facilities where 80% of the deaths and most of the outbreaks have occurred.”

In addition to accounting for 77% of deaths in Naperville, long term care facilities also account for roughly 19% of Naperville area COVID-19 cases.

Restaurants are also causes of “superspreader” events, a study by a group of Stanford scientists suggests.

Despite the indoor ban effective since Nov. 4, Illinois’ daily infections continued to grow until Nov. 13.

“Have we seen cases go down? We have not…I knew it wouldn’t work,” Chirico said. “Because [Pritzker] is focusing on an area that represents such a tiny fraction of what our data, our science in DuPage [and] Will County show as outbreak sources.”

Nevertheless, the governor announced on Nov. 17 in a press conference that all of Illinois would be in Tier 3 mitigations effective Nov. 20.

The newest restrictions include the closing of recreational facilities such as museums, casinos and theaters. Indoor dining remains banned while outdoor seating must remain six feet apart. Gyms and hotels are restricted to 25 percent capacity.

“Right now, this virus has backed us into a corner, and we are left making insanely difficult and weighty decisions,” said Dr. Ngozi Ezike, director of the Illinois Department of Public Health.

Despite the current situation, Chirico remains optimistic for the future of Naperville.

“Very quickly… within months, we should be getting back to a…more normal environment,” Chirico said. “Hang in there.”

Corrections: The version of this story we originally published stated in the opening paragraph that restrictions on businesses “include the suspension of all salon activities, a ban on indoor dining, and a restricted restaurant party size of six people.” In fact, the operations of salons were not suspended. Rather, they are listed as “personal care services” under the governor’s mitigations and can therefore continue to operate at up to a 25% capacity.

In addition, the story’s original headline read: “After Gov. Pritzker announces Tier 3 restrictions for all of Illinois, half of Naperville restaurants fear closure in 5 months, study says.” This would mislead a reader to think that the study cited in the article was conducted in response to Pritzker’s announcement, when, in fact, the study was conducted prior to it.

The story has been updated to correct the error, and a new headline more accurately conveys the facts of the story. We apologize for these mistakes and any confusion they caused.