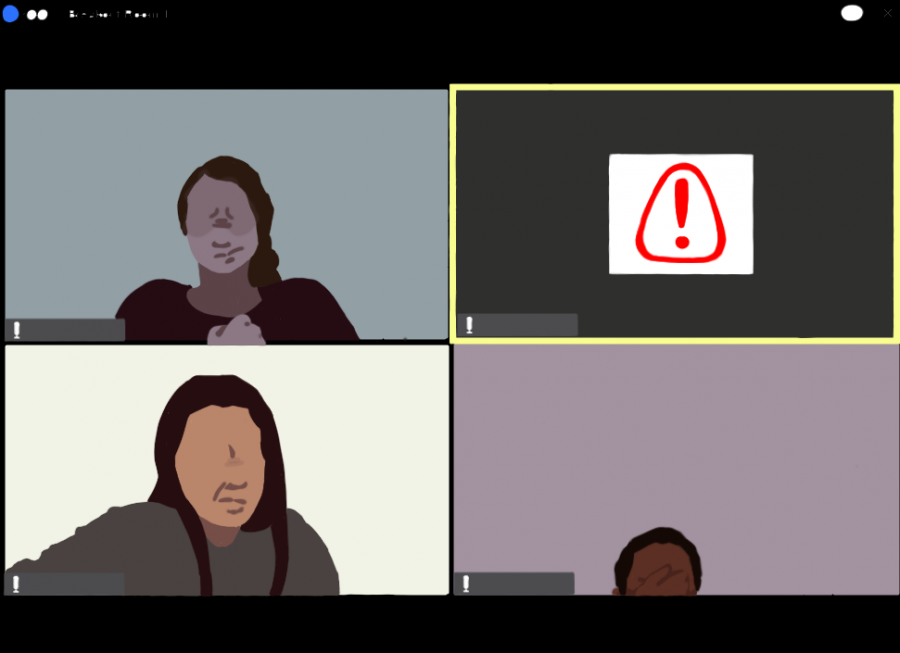 Many Central students have experienced classroom disruptions during the first week of school thanks to unexpected guests known as "zoombombers." District 203 is currently moving all student to a more secure ZoomEDU platform, in part to reduce the potential for zoombombing incidents.

“There was this person who joined with no camera [and] just his first name, and the teacher let him in, thinking it was someone else in the class,” sophomore Neil Ganguly said. “They were being obnoxious, disrupting the class, and making obscene remarks.”

Other cases of zoombombing during the first week of school have included playing music to interrupt teachers and showing indecent pictures or video. Several Central students and teachers used language to describe incidents that went beyond labeling them as mere disruptions, including “obscenities” and “sexual harassment.”

Central administrators have been monitoring the behavior and responding directly to specific occurrences as they’ve been reported.

“There have been over a dozen cases that I’m aware of,” dean Pete Flaherty said, referring to just the first week of the school year. “It certainly could be more than that.”

Often, zoombombing involves students sharing classroom links or meeting codes and passwords to access each others’ meetings. It’s also common for students at Naperville North to share links and passwords with Central students, or vice versa.

School administrators have also developed a process to track down zoombombers.

“In terms of the ones being brought to the deans, we’re keeping track of logins [and] profile names [to] build a mini-database to find out if there are common names being used in different classes to go after them,” Flaherty said. “If they’re using outside email addresses, we’re asking the Naperville Police Department to help out.”

Virtual school can still bring about real consequences, and Student Services is devising creative ways to issue consequences to students who zoombomb.

“We like to work with the teachers and families of the students,” Flaherty said. “The first part is to get the parents [and] students on the same page so the family is aware of what’s going on. We can always limit access to different things on their chromebook, a technology consequence.”

On Sept. 9, students were sent an email about Zoom EDU, a specialized version of Zoom specifically for schools that District 203 bought during the summer in preparation for remote learning.  The mandatory district-wide transition to Zoom EDU, now in progress, is expected to fix many of the issues with zoombombing.

“When you get moved to the EDU side, the only people with access to [your teachers’ classes] will be EDU students with the credentials that match our Naperville 203 site,” Flaherty said. “Only a Naperville Central student would be able to log in to the class.”

In the meantime, classes were asked to take some preventative measures. At the end of the first week of remote learning, District 203 sent families an email regarding Zoom expectations.

“Students are asked to put their full name in their profile. That way, when you ask to be admitted, the teacher can cross your name off the roster,” Flaherty said. “The class could be set up where you have to register. You then have to provide an email address to join the class. Teachers may have students use their video for attendance purposes.”

Teachers who have had to confront zoombombers have shared a sense of surprise and frustration, though their responses to such incidences have varied. When forced to address the problem quickly, some teachers have ended the entire class for all students, while others, like PE teacher Pete Kramer, chose to simply move on with their lesson plans.

“I just kind of chuckled, and didn’t make a big deal about it,” Kramer said. “I just removed them from class.”

Ultimately, many have been left to wonder what has brought about such a level of bad behavior. One theory is that many do not view online interactions with the same seriousness as in-person interactions. Another potential reason might be that the opening days of this unusual school year created a unique opportunity for students to engage in mischief.

“In terms of social media, if you look up ‘zoombombing,’ there are a lot of cases around the country of people finding it funny to join other classes,” Flaherty said. “We’re seeing this really early on in the first few days [when] teachers don’t know their students yet.”

That novelty is starting to wane for the school community, however, as both students and staff work to settle in and establish productive online learning environments.

“It was funny for a little bit, but now it’s just obnoxious,” junior Tomas McCormack said.