Spotify playlist aims to have fun with music during quarantine 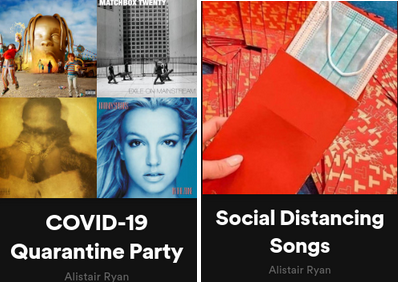 The original cover and title of the playlist can be seen to the right while the new cover is on the left.

During this time of distress and panic everyone needs a little music in their lives. Alistair Ryan’s “COVID-19 Quarantine Party” playlist on Spotify provides users with a long list of songs with titles relating to illness. Created for listening while stuck inside due to the  quarantine, the list adds several elements of comedic relief.

Ryan, the 24-year-old student who lives in Singapore, wants to continue a career in photography and video. Ryan has created multiple playlists on Spotify and gained popularity from his most recent playlist, “COVID-19 Quarantine Party” which received over 400,000 likes.

“I mean Spotify is okay, I wouldn’t say I’m a huge fan of it or anything,” Ryan said. “I just made a playlist and it blew up by accident, I guess.”

The nearly eight hour-long playlist of 129 songs includes several obvious choices, such as “Toxic” by Britney Spears and “Don’t Stand So Close To Me” by The Police, their titles tailor made for the current COVID-19 situation.

Many songs have titles that relate to breathing. “Take My Breath Away” by Berlin, “Harder To Breathe” by Maroon 5 and “Catch My Breath” by Kelly Clarkson will remind you that COVID-19 causes respiratory difficulties.

General songs about illness include  “Sick Feeling” by boy pablo, “So Sick” by Ne-Yo and “You Make Me Sick” by P!nk.

No matter what you’re into, there’s a little bit of every genre here, from Travis Scott’s “SICKO MODE” to the Bee Gees’ “Stayin’ Alive.”

Ryan created this playlist with suggestions from his friends on Instagram.

“The first few were just thoughts of songs I had that would relate, but in the early stages I also asked friends on Instagram to send in suggestions,” Ryan said. “They helped a lot.”

The cover picture for Ryan’s playlist is labeled by some as cultural appropriation, due to the image of a face mask inside of a red envelope, known as “hongbao,” which is a traditional Chinese gift given during the lunar new year. The red envelopes symbolize good luck and prosperity.

Others see the image more as an example of irreverent humor.

“I don’t think it counts as cultural appropriation but it’s definitely disrespectful,” sophomore Isabel Zhou said. “Since hongbaos are a Chinese tradition, I think that the image could be seen as tying the coronavirus to Chinese culture, which is both insensitive and inappropriate.”

Ryan switched the title from “Social Distancing Playlist” to “COVID-19 Quarantine Party.” His cover photo remains as an image of a face mask inside of a red envelope.

“One person said the old cover photo with the woman with the mask on her eyes was ‘misleading and racist,’ but I honestly don’t see how,” Ryan said. “No one has complained directly to me about the recent one.”

Ryan’s playlist was not intended to be racist towards the Asian-American community in the United States.

“Please don’t be racist to your fellow Asian friends, they didn’t cause the virus nor do they want it,” Ryan said.

The playlist reminds junior Gabi Kwiecien of being trapped at home during the quarantine.

“The playlist has a wide variety of music from all genres and time periods, however, I would not willingly listen to it during this quarantine,” Kwiecien said. “I don’t want to be reminded of being trapped at home. I would rather listen to more uplifting and positive music because it will not make me think of how horrible this quarantine is.”

Ryan described the popularity that the playlist received and how it has affected him.

“I’m glad most people find humor in times like this,” Ryan said. “We can afford to laugh a little. Only one person gave me hate, who said ‘I hope you get COVID-19 for this playlist.’“

Although some songs can be seen as offensive and insensitive, the playlist brought people together during a time of uncertainty.

“I enjoyed listening to the playlist during my coronacation because it’s a sad and boring time but listening to this playlist made for entertainment,” junior Audrey Wachter said. “It helped me remember that we are all in this together and that we will get through it together.”