Don’t be the grasshopper: Thoughts on COVID-19 from a Chinese American 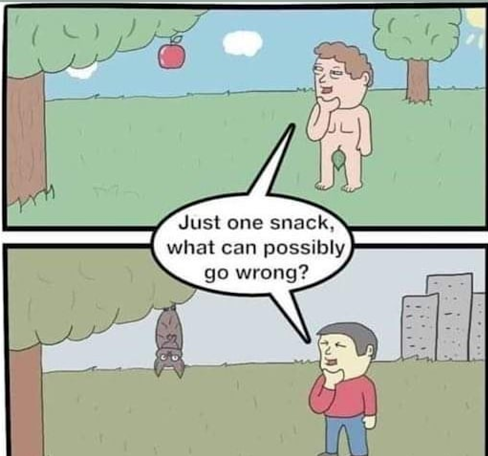 An Instagram user recently posted this cartoon, emphasizing it is a joke. Even while pointing out the insensitivity of the cartoon, others continue to circulate the image on social media. Some have also reported the posts in an effort to have them removed.

The first story I remember reading was “The Grasshopper and the Ant.” As my tiny fingers followed each word on the page, I thought I completely understood the moral of the story: be prepared.

The fable is, of course, much more nuanced than those two words, and it highlights a fundamental problem with humanity that in this day and age we must solve quickly, lest we end up like the grasshopper: starved, alone, doomed.

The grasshopper’s problem was complacency.

For every problem we’ve faced throughout this now-pandemic, humanity’s complacency has been the number one culprit.  When we try to find the exact origin of the virus in Wuhan, it’s hard to pinpoint. All we currently know is that it most likely came from a wet market filled with wildlife in the city.  To Americans, it’s incomprehensible that people would eat frogs, turtles or bats, but it’s important to examine the history of these agricultural commodities.

During the reign of Mao Zedong, China suffered through many famines, some caused by natural disaster, others by inept government policies, including farm collectivization.  When China began the inevitable privatization of agriculture and livestock, most went into the production of domesticated animals: poultry, pork and cattle, but some turned to other methods of sustainability, which the government recognized to be equally lucrative.  Additionally, China was and still is a country with high poverty rates, and in less developed regions, people have no option but to eat what they can find.

So, as National Geographic reports, it is legal to breed and sell around 50 species of wildlife in China.  The government also turns a blind eye to certain animals. Scientifically speaking, we know that wildlife, especially if not thoroughly cooked, can carry many dangerous diseases. That’s currently the most likely way SARS-Cov-19 was spread to humans.  China not only sanctioned the sale and consumption of these products with little regulation in grossly unsanitary wet markets up until the outbreak, they banned wildlife consumption before, during the 2003 SARS outbreak, only to reinstate their legality.

This is complacency at work: China’s government learned their lesson during SARS, but then felt that whatever economic benefits of reverting to the original wildlife laws outweighed the risks.  Sadly, history repeats itself.

The virus has now successfully spread to millions in the city.  Desperate civilians flock out of the province and even the country in droves, some arriving in Italy, Iran or the U.S. This relay of complacency is far from over.

Granted, China’s governmental structure allowed it to take drastic measures like the shutdown of an entire city and the erection of temporary hospitals in a week. But, America’s health officials’ responses, from the CDC to our local health departments, have been sluggish.  Wuhan was an example set for the rest of the globe. Hiding the disease and downplaying its statistics don’t help. Even in a country like China where the government can control people with so much ease, the outbreak still spread like wildfire. I keep hearing the words “proactive, not reactive,” but it’s clear we’re 100% in the reactive phase.

Here at home, our students remain complacent. On Friday, I heard people rejoicing about the cancellation of school through spring break, and not for the right reasons.  People are spending this time having parties and hanging out with friends. Socialization is important, but the cancellations also mean that curriculum and tests are all thrown off, severely impacting students’ education.  More important, the cancellations occurred because the risk of catching this disease is high enough that even keeping each school’s student body to itself wouldn’t be enough. I hope students recognize the caution that they’ll need to take in these next three weeks.

Our societal indifference and complacency toward the disease is perhaps most evident in the politicization of the virus.  Russia has taken this time to fight with Saudi Arabia over oil prices, and the Chinese and American populations feel deep animosity toward each other, harboring deep suspicions that they were directly responsible for the virus.

The social effects probably impact me the most.  Some students were looking at a meme that ridiculed Chinese dietary habits, and I asked them whether they thought China was to blame for the outbreak.  I received a resounding yes. One student even told me that “raw bat is a delicacy in China,” without much to back up that statement.

I’m Chinese.  I’ve been to China numerous times.  I know for a fact that by and large, raw bat meat is not considered the epitome of Chinese cuisine. My grandparents also live in Wuhan, and for the last three months, they’ve been hiding in their homes.  When I hear remarks like what the student said to me in the library, and when I see Chinese people being beaten up in the subway in viral videos, it’s disappointingly tragic, and it places the chilling thought that “that could be me” in my head.  Racism against Chinese Americans has been an issue since the 19th century, but complacency has always made us overlooked. I hope that changes.

I’ve been voicing the unpopular opinion that we should be worried about COVID-19 since the beginning of February.  That being said, my purpose isn’t to stir people’s irrational fears. Depleting the community’s supply of toilet paper is not a solution to anything, but I don’t want to point fingers either.  That helps no one, and I’m as much to blame as you, the managers of the wet market in Wuhan or the CDC.

Humans often have the chance to choose their own fate, but somehow, the arduous road always ends up inevitable.  Climate change, resurgences in extremism and political apathy mean that this is not the last time complacency will strike at the foundations of our society.  Fortunately, the most important step to fix our problems is laid out right in front of us. Unlike the grasshopper, we still have time. If we change our mindset, anything is possible.