St. Patrick’s Day events canceled, but its spirit lives on 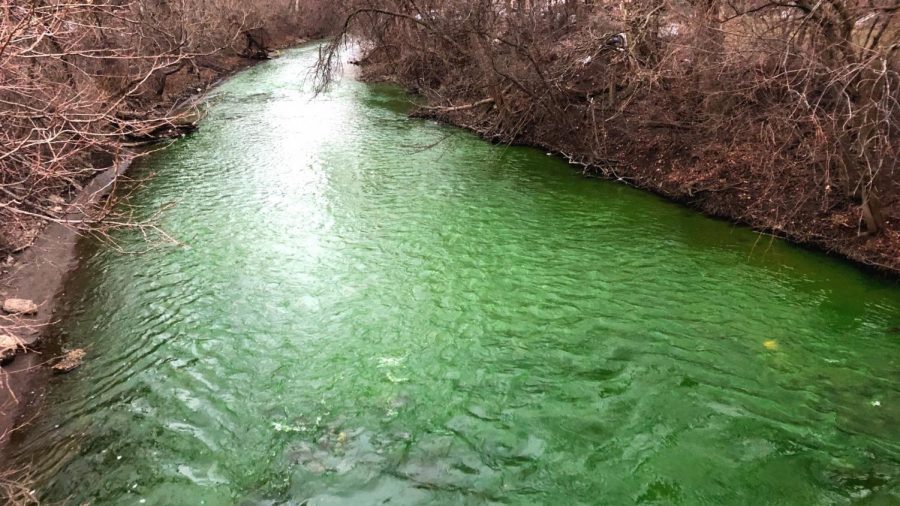 It is a tradition in the city of Chicago to dye the Chicago river green on St. Patrick's day. This event was cancelled to dissuade tourism during the COVID-19 pandemic. Some locals proceeded to dye the river green downstream despite this.

St. Patrick’s Day, a festive holiday often oriented around green food and pints of Guinness, has been canceled. Not officially, but with the city of Chicago no longer hosting any major holiday events due to public safety concerns over the spread of coronavirus, St. Patrick’s Day has turned a paler shade of green.

The Irish American Heritage Center of Chicago, a community space founded in 1985, postponed its annual March 14 and 17 St. Patrick’s Day parties. The Saturday night event was expected to draw approximately 5,000 people and would have lasted from 1:00 p.m. until midnight.

Kathy O’Neil, the public relations manager at the Irish American Heritage Center, says that despite these cancellations, the center has more than 200 programs aimed at educating all year long.

“What we do through our programs like St. Patrick’s Day, [is] showcase the best of what we do all year long, which is present Irish culture,” O’Neil said. “It’s really important for us to show them that the day itself is more than just having a beer. We do that all year long as we present programs showcasing Irish music to dance to literature to film.”

The organization’s largest annual event was, as most are aware of by now, merely one item in a long list of cancellations.

The March 14 Chicago St. Patrick’s Day Parade was canceled on March 11 and the city also decided to forego the tradition of dying the Chicago River green to dissuade tourism. Naperville was, naturally, similarly impacted, with local events like the St. Paddy’s Run and St. Patrick’s Day parade on March 14 also experiencing cancellations.

Just yesterday, on the eve of St. Patrick’s Day, all dine-in restaurants were closed at 9:00 p.m. by order of Illinois Gov. J.B. Pritzker, with only drive-throughs and carry-outs being allowed to continue to operate. Further reductions in recommended gathering sizes and increasing closures as a means of enforcing the practice of social distancing served additional blows to what has always been a social holiday.

According to the U.S. Census Bureau, March is dedicated as Irish-American Heritage Month. People of Irish descent made up approximately 10% of the U.S. population in 2017 and 12.2% of Illinois’ population. There are over 1.5 million Irish Americans living in Illinois, making up 7.5% of Chicago’s population.

Even despite most St. Patrick’s Day events canceled, the month of March is open to learning and celebrating Irish culture.

Central junior Chloe Gibbons celebrates Irish-American Heritage Month with her dad, who is 100% Irish and the son of Irish immigrants. Gibbons and her family celebrate St. Patrick’s Day by cooking traditional food and playing practical jokes in the name of the leprechauns.

“We eat corned beef and cabbage, which is an Irish thing,” Gibbons said. “And [my dad] plays pranks on me. One year he put my shoes in the freezer.”

Gibbons hopes to celebrate St. Patrick’s Day in the future by visiting Chicago to see the celebrations throughout the city.

Irish films are another way to explore Ireland without the health risks of travel abroad. Rotten Tomatoes has scored the best of classic and contemporary Irish or Irish-American films, including works like “The Quiet Man”, “The Irish Pub” ,“Once” or “Brooklyn.”

Try a taste of the Emerald Isle by hunting online or through family cookbooks for Irish recipes to make at home like soda bread, corn beef and cabbage, fish and chips, or any type of chocolate-covered biscuit.

Despite flights to Ireland being reasonably priced, the best way to celebrate Irish Heritage Month may just be to explore Irish culture or the life of the real St. Patrick, drinking tea, or honoring the leprechauns with a few good-natured pranks.