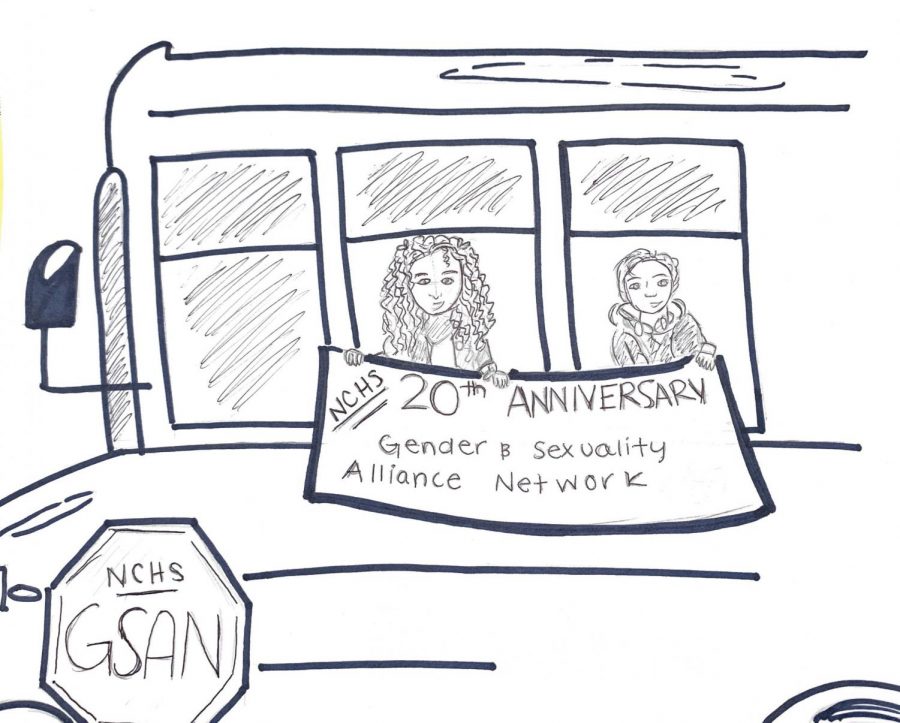 The Gender and Sexuality Alliance Network, or GSAN, is celebrating its 20th anniversary since forming in 2000. Originally called Gay Straight Alliance, or GSA, the club has grown to provide a safe space for all students at Naperville Central, especially those who identify as part of the LGBTQ+ community. The club’s name was altered two years ago to be more inclusive towards gender identification and orientation.

Robert Lugiai, a Central social studies teacher and alumnus, has been sponsoring the club for three years along with fellow sponsor Caressa Buchanan, a psychologist in Student Services. Lugiai, who was not out himself until college, expressed how anxious high school can be for students who are queer and how important it is to give them a space to be heard.

“There’s a liberating feeling to being accepted by other people,” Lugiai said. “When you finally don’t have to hide who you are, you can be the person that you were meant to be. It not only takes a tremendous burden off of a person’s shoulders, but also brings happiness that you don’t have to hide who you are and you can express yourself the way that you want to be expressed, so that’s why we have this club.”

GSAN meets once a week on Thursday afternoons to provide students a welcoming space to support each other, allowing students to decide how much they feel comfortable sharing with the group, according to Lugiai. Students discuss topics ranging from national issues to things at Central.

Aside from the advisors, the club is managed by senior president Tesla Ventsam and junior vice president Taylor Ziegler. The two help organize and run meetings, as well as providing weekly discussion questions.

Ventsam, who is non-binary, realizes the importance of reaching out to all students, especially  to educate those who are either unfarmiliar or biased against the LGBTQ+ community. This, they say, involves alerting others when they say or do something offensive.

“If it doesn’t get called out, it’s going to keep happening,” Ventsam said. “When it’s called out it can be an uncomfortable situation. That’s why a lot of people don’t do it, but once it’s called out then they know ‘I can’t be saying this anymore. This isn’t alright.”

Ventam says it can be difficult to reach students and older generations, but Lugiai believes education is key. GSAN was able to include a brief gender and sexuality unit in Central’s Health classes, but some students had trouble taking it seriously.

Students faced opposition early on when trying to establish the GSA and received pushback from the community and the school board. According to Lugiai the club faced difficulty securing funding and was not approved as an official organization until very recently.

While many students go to PRIDE over the summer, the club’s biggest event is the Day of Silence, where students pledge to be silent for one day in recognition of the voices of those who have been silenced in the LGBTQ+ community. Students have the option to pledge their silence or wear placards to show their support.

Lugiai and Ventsam both noted the importance of the Day of Silence, as well as showing solidarity with those participating.

“So many students are silenced by their families, by how they’re not ready to embrace who they are yet, by society,” Lugiai said. “Even if you’re not ready to speak your own truth there are people there that understand that and support that.”

The club’s focus this year is to reach out to transgender students, who have been facing increased discrimination in schools. On Feb. 22, 2017,  the U.S. Department of Justice announced a withdrawl of a policy submitted in 2016 under the Obama Administration which allowed transgender studnets to use the bathroom of their prefered gender. Lugiai expressed his alarm at the rollback of the rights of LGBTQ+ students, especially under the current Education Secretary, Betsy DeVos. The Education Department has adopted the Department of Justice’s position that Title IX, the law prohibiting sex discrimination in federally funded institutions, does not include gender identity.

“Particularly for our trans students, with rollback of trans rights in education, it’s been really difficult because oftentimes they see an almost uphill, hopeless battle,” Lugiai said. “You see rights that are available to every other person except gays or lesbians, or members of the trans community. But you have to always remember that progress is difficult, and sometimes when there’s a setback you have to keep marching forward. Our students, myself included, are disheartened oftentimes about news on the national level, but we remember that there’s always something to fight for and always a subset of our community that needs our help. Even if we have rights, there are always others that may not.”

Ventsam agrees, saying their focus early in the year was to start the conversation about adding one or two gender neutral bathrooms to the school. Ventsam says they have been called out multiple times for being in the wrong bathroom, once by a teacher.

“I am so sick of being called out for being somewhere where I do belong,” Ventsam said.

Despite the current political climate, Lugiai says he and the GSAN are optimistic about the progress that has been made in the past 20 years.

“The really interesting thing is seeing the shift in how we here at Central and the community as a whole have viewed the LGBT community,” Lugiai says. “With more acceptance of gay rights and gay marriage and gay liberation, it’s been really nice to see people talk about us and administrators come in and talk to us, and see more acceptance on [the] club level.”

GSAN continues to expand, adding plans for an end of the year event called a Lavender Ceremony and a potential PRIDE fest at Naper Settlement this summer. Despite its growth, the core of the club has stayed the same since its founding 20 years ago: provide a space for all the students of Central and continue promoting kindness and acceptance for the LGBTQ+ community.