As Coronavirus spreads, so do misconceptions 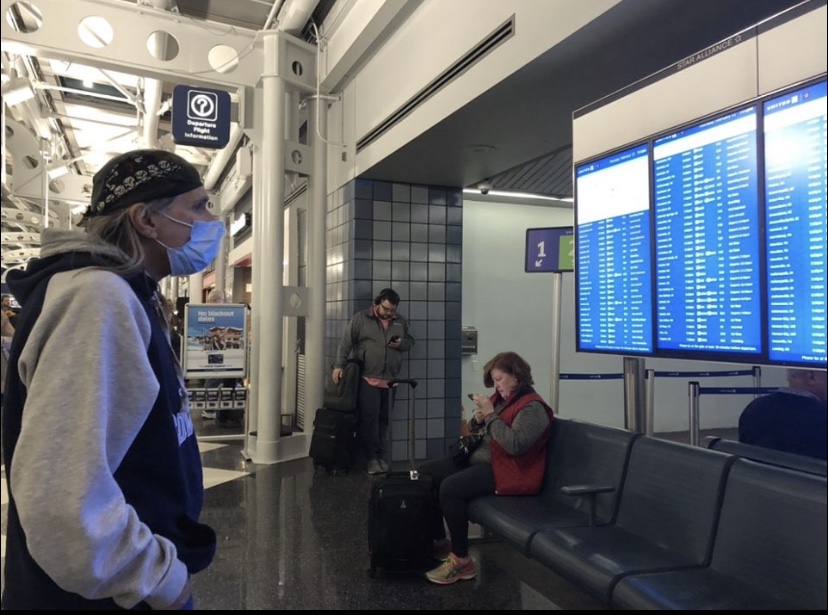 A traveler at O’Hare International Airport wears a mask as he waits for his flight on Feb 13. Many are taking precautions against the spread of coronavirus.

Editor’s note: Some of the information in this article was collected during the week of publishing and is no longer accurate. The most recent information can be found at cdc.gov

Beginning in late December and early January, a new strain of novel coronavirus broke out, starting in Wuhan, China. The virus is known as the 2019 Novel Coronavirus. This virus has been named COVID-19 by the World Health Organization on Feb. 11, but is still commonly referred to as “coronavirus.”

COVID-19 is a respiratory disease that is spread through coughing and can be transmitted from certain animals to people, as well as from person to person.

Panic about the coronavirus has arguably traveled faster than the virus itself, with false or misleading stories and statistics circulating throughout the United States.

Online platforms like TikTok and Instagram have aided  in perpetuating jokes about COVID-19, particularly among the student population. While comments that the virus is going to “kill us all”  are mostly intended to be jokes, students have been bringing in statistics and details about death counts from online to school.

But although the virus has never been seen before and currently has no vaccine, students at Central and the United States in general have very little to be worried about.

“The virus essentially poses no risks to anybody outside of the heavily affected areas in China,” said Doctor Judd Hultquist, assistant professor of medicine at Northwestern University.

At the time of writing, there are roughly 75,000 people infected with COVID-19 in China, where roughly 98% of cases are found. Of these cases, about 15% require hospitalization, and about 2% (1,773 cases) result in death. Numbers are quickly changing due to the fact that the virus is relatively young and still spreading.

“There have been a lot of reports online from not valuable, or reputable, sources that can spread misinformation,” Hultquist said. “You want to be sure so you only look at references from these trusted organizations, such as the [World Health Organization] and the [Centers For Disease Control].”

MISPLACED FEARS
“There [have] really only been a handful of confirmed cases where the virus has been able to spread to new people outside of China, less than 50 of them recorded so far,” Hultquist said. “In the United States, only two transmissions have been recorded to have occurred within the U.S. itself. The likelihood is almost zero that the infection will take hold here in the U.S..”

For U.S. citizens, influenza poses a far greater risk, but rarely ever obtains such a vast amount of attention as  COVID-19 has over the past two months. Influenza has already infected 19 million U.S. citizens this year, and will infect far more than COVID-19 is projected to.

COVID-19 can seem more dangerous because of its increased severity compared to influenza, but remains far less dangerous to U.S. citizens.

The most effective method of defense against COVID-19, and any virus during flu season, is to wash your hands regularly. Practice clean habits when sneezing or coughing.

CORONAVIRUS BEYOND YOU
For people living outside the United States, particularly in Asia, the risk of contracting and dying from COVID-19 is much higher.

At the time of writing, 98% of cases of COVID-19 are found in mainland China. Of those infected, about 10% have recovered, and roughly 2% have died. An overwhelming majority of deaths have occurred in Hubei province, where Wuhan is located.

Doctor Ge Wang is a medical professional who has lived and worked in Wuhan for 53 years and has experienced the effects of the virus firsthand. As a dentist, Wang does not specialize in the areas affected by the virus, but was able to offer her professional first-hand advice, having been present and in contact with doctors who were treating the first COVID-19 patients on Dec. 27.

“At that point, medical personnel already knew about the existence of the virus,” Wang said, “but the government did not say there was clear evidence of the disease’s spread.”

Because of the delayed response from the government to share details about the virus, the rest of the world was not fully informed until the second week of January.

Since the beginning of January the virus has continued to spread and affect more people, still primarily in China. COVID-19 has an incubation period of roughly 14 days. During this time period, it is still possible to spread the disease without showing symptoms.

The largest contributor to the spread of COVID-19 virus comes from the Chinese Lunar New Year celebration that began on Jan. 24. As families travel across China to meet with relatives, the largest annual human migration occurs. This mass travel combined with the silent propagation of the virus allowed it to spread very quickly.

Big cities have become what appear to be ghost towns. Medical professionals are unable to keep up with the flow of patients as they get sick.

“The situation has caused us to not be able to leave our homes, and has caused financial strain for people as well,” Wang said. “Classes can’t stop, but no one can go to school, so I have to plan and teach lessons online.”

The problems don’t stop there either. Tourism is a large industry for cities like Hong Kong and Shanghai, both of which have seen nearly zero tourists, in turn causing businesses to lose money.

Health officials have been working hard to prevent the spread of the disease past China so that these adverse effects do not take hold on the rest of the world.

“All that you need to do to stop an epidemic is to break the cycle of infection,” Hultquist said. “You need to treat those who are infected and prevent more people from catching the disease.”

Quarantines, while somewhat controversial because of their effects on travel and the economy, have been highly effective, as the disease has primarily stayed in China. Some are still rightfully dissatisfied with the outcomes, however.

“[The problem with] enacting these kinds of travel bans [is it] can hurt the economies of the various countries affected,” Hultquist said. “But it can also elicit fairly xenophobic responses.”

XENOPHOBIA: THE COMPANION OUTBREAK
Many social media posts have detailed how Asians not only in the U.S., but in Canada and the EU as well, have experienced situations where people are avoiding them due to irrational fears that they carry the virus. This discriminatory behavior has taken place at Naperville Central as well.

“I saw an Asian kid walking in the hallway and two white kids yelled ‘get away from the corona carrier,’” sophomore Jeffrey Huang said.

Wang has also seen and heard of the same form of discrimination from her colleagues.

“I think these fears are completely unnecessary,” Wang said. “[This kind of spread] would be impossible in America.”

Both doctors held the same stance that COVID-19 posed so little a threat to Americans that these fears are an overreaction.

Because viruses decrease in potency as they spread and reproduce, the COVID-19 has very little chance of taking hold in the U.S., especially combined with the quarantine and containment efforts.

Some of the stigma has also stemmed from claims that the Chinese government is lying about the numbers of the infected and dead from the virus.

“Unfortunately, China has not had the best history of transparency when it comes to infectious disease,” Hultquist said. “The last major epidemic outbreak, the SARS outbreak in China, there was some evidence that they were perhaps under reporting the number of cases.”

There is no current evidence to suggest that the Chinese government is lying about numbers, but some cases go unreported unintentionally.

“Many patients, unable to get treatment, have already died, dying in their homes or in their neighborhoods,” Wang said.

While problems continue in China, quarantines and travel restrictions, while harsh, are the current best defense to the spread of the disease, and not much can be done until a group immunity is built up.

The remaining doctors who have not gotten sick or quit due to stress continue to work in hospitals in China to help those who have contracted the disease.

For the most updated statistics and information regarding the  growing COVID-19 epidemic, visit cdc.gov and who.org