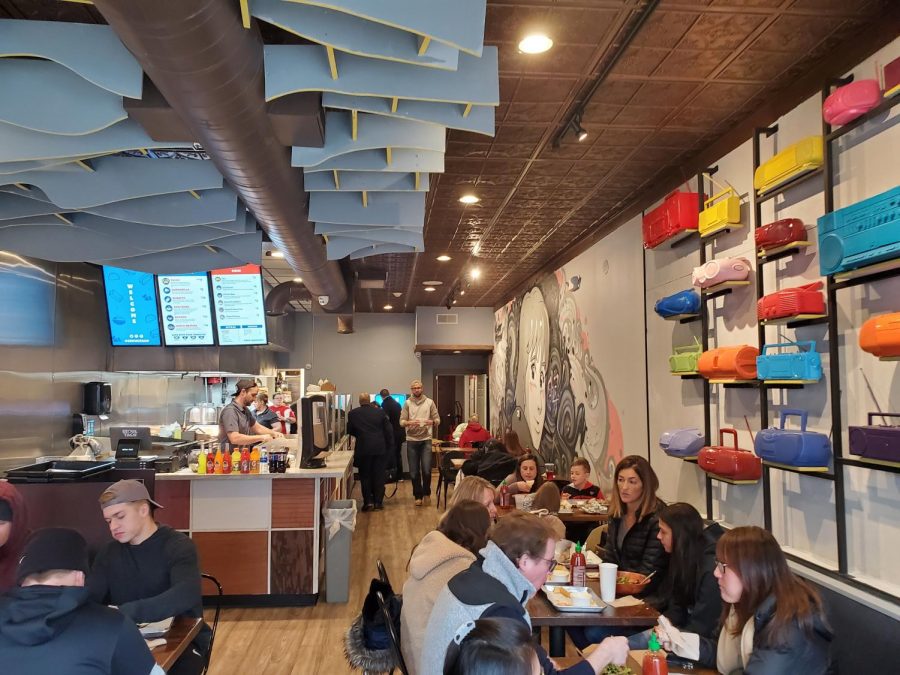 Seoul Taco is located near the corner of Washington Street and Jefferson Avenue in downtown Naperville.

First off, almost everything here is spicy, or heavily revolves around the spicy flavor, so if you aren’t a fan of spicy food, you might have to rule this one out.

The restaurant itself has a great fun and vibrant theme. The decor consists of a mural on the wall along with a collection of ‘90s style boomboxes creating a unique feel.

The menu is pretty simple, making choices relatively easy. They have six main dishes: tacos, burritos, quesadillas, nachos, gogi and waffles and a gogi bowl. Most of the dishes can be in either steak, pork or chicken.

The tacos are a simple amalgamation of corn tortillas, meat, a spring lettuce blend, crushed sesame seeds and their house recipe of “Seoul Sauces,” which seems to be some type of blend of spicy mayo.

The meat in the tacos was typical Korean barbecue style, spicy and savory at the same time, however, I was not particularly blown away by the remainder of the food.

The burrito felt a little too rich and creamy with the added sour cream, especially when mixed with the spicy kimchi rice.

Of everything I was able to try, I would recommend the gogi bowl, a blend of vegetables and salad mix with rice and a fried egg on top. This dish gave the most flexibility with how spicy the food was due to the nature of the gochujang pepper sauce not being thoroughly mixed in.

If I had any, my main gripe with the food is that when I start eating a burrito or taco,  I am accustomed to the meats and flavors of your average chicken or steak tacos, but instead, you got something spicy and different, which isn’t bad, but felt a bit unusual.

Overall, Seoul Taco brings a new style of food to Downtown Naperville that can make for a pretty good meal in a nice setting, especially for people who want to try something new.