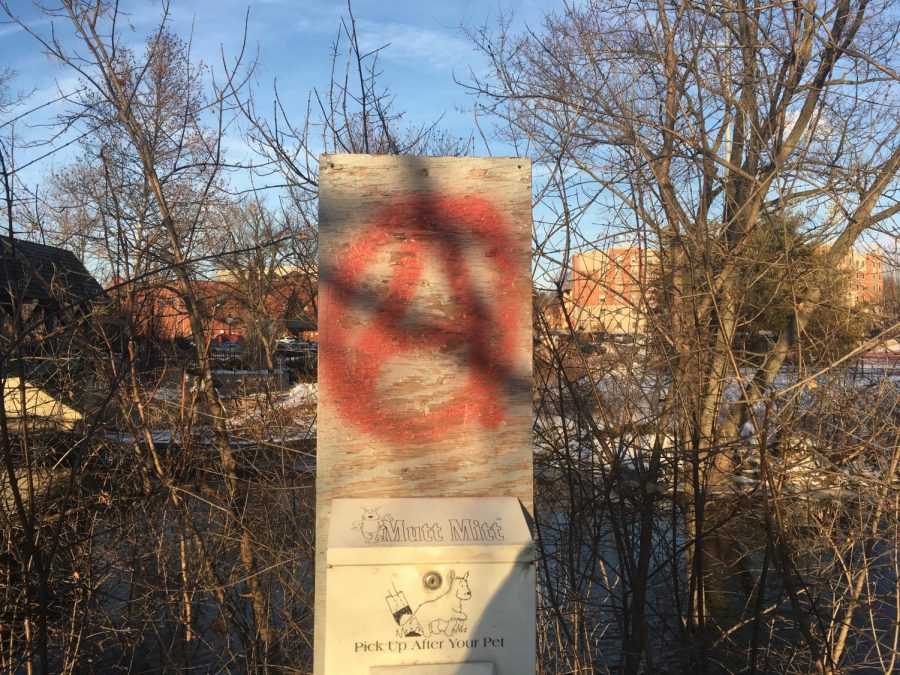 A sign was spray painted with the Anarchy vandalism symbols behind the Burger King on Washington Street. The restaurant was also vandalized with profanity and threats aimed at police.

During the night between Dec. 27 and 28, police believe two individuals went on a vandalism spree in southeast Naperville. The culprits, who remain unknown, slashed tires and threw bulbs at cars of Naperville residents on their private property, as well as defaced homes. Multiple cars, mailboxes, and homes were spray-painted with a red “A”, a popular symbol of anarchists. In total, 21 counts of vandalism were reported.

In many of the targeted neighborhoods, multiple cars that were parked in driveways or on streets were vandalized. Junior Anthony Pendalino told the Central Times that four of his neighbor’s cars were vandalized, as well as the car he occasionally shares with his older sister, Bella.

“I woke up at 10 and I looked at my texts and Bella sent a video of [the car] in our family group chat,” Penalino said.  “There were the anarchy ‘A’s on four windows, the ones on the side and the back window, and then the front two tires were slashed.”

Pendalino and his family remained confused by the anarchy “A” symbol spray-painted on their windows long after the car was fixed.

The vandalism on private property occurred south of 75th Street and east of Naper-Plainfield Road. Two locations in Downtown Naperville were also targeted: a sign near the Riverwalk had a red “A” spray-painted on it and a Burger King at 506 S. Washington Street had several red “A”s and messages and profanity aimed at police defacing its parking lot and drive-through window.

Few developments have occurred since then and no arrests have been made following the vandalism spree. If the suspects were caught they would face a majority of misdemeanor charges for defacing private property. Police have released photos and descriptions of the suspects and their car, which had blue interior lights. On Jan 21, Naperville Crime Stoppers announced a reward of up to $1000 for information leading to the arrest of the vandals.