‘It’s up to you’: Civil rights leaders visit Central to share experiences, talk about embracing diversity 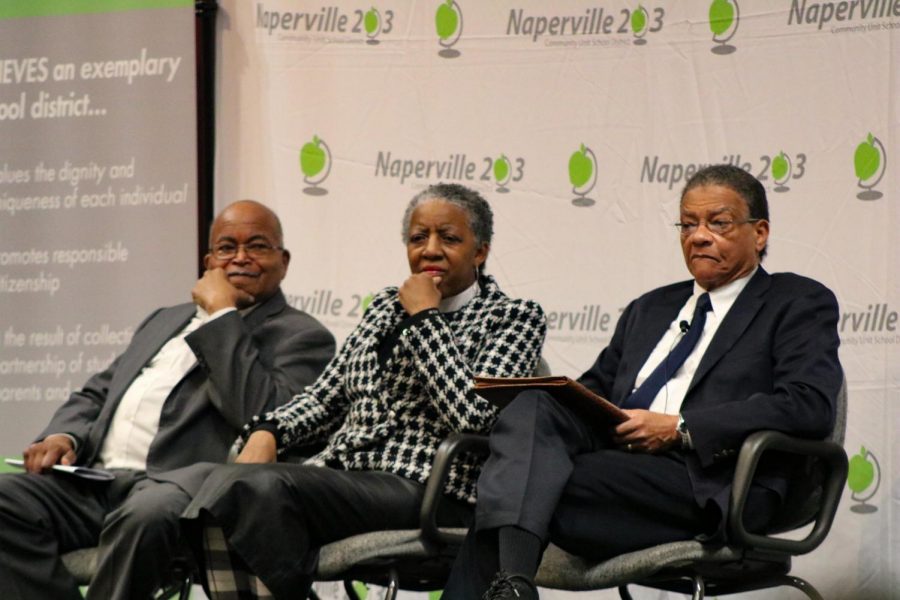 Thomas Armstrong, Dr. Janette Wilson and Dr. James Shannon appeared at the request of Rev. Jesse Jackson to share their life experiences with students at Naperville Central. The three civil rights activists reminded students that teenagers were and should continue to be active in the movement for equality.

Three prominent civil rights leaders visited Naperville Central on Monday to address the steps being taken to improve tolerance and diversity in the community, following several high-profile news stories about racism in Naperville, one of which occurred at Central. Serving as panelists to speak to Central students were Rev. Dr. Janette C. Wilson, co-founder of Wilson, Howard P.C. Attorneys at Law Inc. and former criminal defense attorney, former Freedom Rider and author Thomas Armstrong, and Dr. James Shannon, who served for the Leadership Council for Metropolitan Open Communities, a fair housing organization.

Each panelist has had extensive experience advocating for civil rights. Wilson is part of the social justice coalition Rainbow PUSH, where she serves as senior adviser to Rev. Jesse Jackson, civil activist and former Democratic presidential candidate. In addition to challenging segregation in buses, Armstrong helped African Americans register to vote in Mississippi during the 1960s. Shannon was baptized by Dr. Martin Luther King, Jr. as a boy and is now a pastor at the Peoples Community Church in Glen Ellyn.

Both Armstrong and Shannon are set to receive  awards from the DuPage County Board this week.

“I remember back in the day, I couldn’t even get an appointment with the county board, but now they’re going to give me an award tomorrow,” Shannon said.

Jackson was scheduled to attend as the event’s featured speaker but was forced to cancel over the weekend due to a personal conflict. Both Central principal Bill Wiesbrook and Wilson told the audience that Jackson hopes to reschedule his visit, possibly in February during Black History Month.

The visit was divided into two halves. In the first, all freshmen attended a second period assembly, during which the three panelists shared their experiences and answered questions moderated by Dr. Rakeda Leaks, District 203’s Executive Director of Diversity and Inclusion. The questions were submitted by freshmen beforehand and asked the panelists to speak about their personal experiences and offer advice for how the community can embrace its diversity.

“We’re here today to help you understand that we’re moving in a different time now,” Shannon said. “We’re being recognized in a different way and I’m just surprised at the recognition that we get now.”

The panelists, each having grown up in a segregated community during the civil rights movement, shared with students the progress that the country and individual communities have made during their lifetimes.

For example, when she was born, Wilson’s mother did not go to the hospital due to the poor treatment and limited equipment available to African American women.

“I was born at a time when African American women who were prepared to give birth could not be treated in hospitals in the normal course of the business of that hospital,” Wilson said. “My mother had to have me in my grandma’s bedroom, because to go to the hospital would require her to be treated in the basement of the hospital with limited access to the medical equipment that is taken for granted by many of you. In the segregated south, there was separate and unequal school facilities.”

Shannon faced push-back from Chicago’s realtors and pastors while helping diverse families integrate into communities. Even in his own neighborhood, he encountered prejudice.

“When I moved [to Glen Ellyn], my neighbor directly across the street refused to speak or say anything,” Shannon said. “All the other neighbors came out and rallied behind us. But about a year later, my wife and I were working in the lawn, and all of a sudden he and his wife came over. [They] shared with us that they grew up in a town by the way Cicero, Ill., and he had never known been around a black person. I had just been elected to the president of the homeowners association. Because of his racist upbringing, he [said he] knew he had to change because his attitude was out of place.”

When he was helping register voters in Mississippi, Armstrong had to work in secrecy at night to protect his life.

“We see issues being faced by our grandchildren and your generation, of tensions between the races based on a culture of disregard for all people,” Wilson said. “Dr. King would ask us to think about judging each other by the content of our character and not the color of our skin.”

Shannon agreed, stressing the importance of self education.

“You cannot get any kind of common sense out of racism,” Shannon said. “It makes no sense. So the main thing that we have to do is to educate ourselves. Educate ourselves about the diversity of others, educate ourselves, on why it is important for us to have a diverse society and also learn to celebrate the culture of other people.”

Following the freshman assembly, panelists and distinguished guests met with approximately 100 students of all grade levels for a question and answer session. After Wiesbrook briefly introduced the panelists, a microphone was passed around and students had the opportunity to ask them questions.

Senior Hayaa Chhaya asked how she could change the views of others and Armstrong noted the value of spreading positivity.

“You need to be enthusiastic,” Armstrong said. “Enthusiasm is contagious. You got to earn trust. You need to stay true to yourself and build people up when you see them.”

Students expressed appreciation for the panelists’ visit but lamented its brevity.

“It was good, but I feel like it should have been set up a little differently because there wasn’t a lot of time for everyone to get their questions out,” senior Mimi Roberts said. “I feel like it should have been more like a circle, so you get that one-on-one connection. You can actually talk to them and get their response, rather than [them] talking to us as a crowd.”

Senior Sofia Gonzalez believed that the visit could have been more beneficial if all students had the opportunity to attend.

“I really wanted [for] the whole school [to get] that understanding, and [for us to] actually talk to everybody about the whole situation and get everybody’s side so everyone could understand why it was such a big issue,” Gonzalez said. “I wanted people to understand that they can’t just go around saying these things.”

During both assemblies, panelists advised students on how to promote acceptance and equality in society.

“I urge you to speak out against discrimination and join forces with the oppressable, your teachers, and organizations to support victims of hate crimes that might appear on your campus,” Armstrong said. “You can overcome hate. All it takes is for good people like you to stand up. Hate in America is becoming commonplace.”

Wilson emphasized the importance of taking action as students, noting that the panelists had begun advocating for civil rights as teenagers. This included Armstrong, who rode buses when he was the same age as students in the audience.

“I want to see you decide to lead and look at your school as a microcosm of society,” Wilson said. “To help your school become the school that [its] mission embodies. [Work] as global citizens, recognizing that there’s no dominant citizen.”

“During the civil rights movement, it couldn’t have worked if young people were not involved,” Shannon said.

The panelists shared several ways to address racism, including promoting inclusion in the community.

“We need to create an atmosphere where racism doesn’t exist,” Shannon said. “It’s very important that you get a friend that doesn’t look like you [or] that has a different culture.”

All three panelists agreed that students held the potential to advocate for positive and critical change.

“What will your generation be remembered for?” Wilson asked. “It’s your challenge. It’s your opportunity.”

The following images and video clips of the featured speakers from the freshman assembly were posted at Central Times on Instagram  by social media editor Paula Recio: