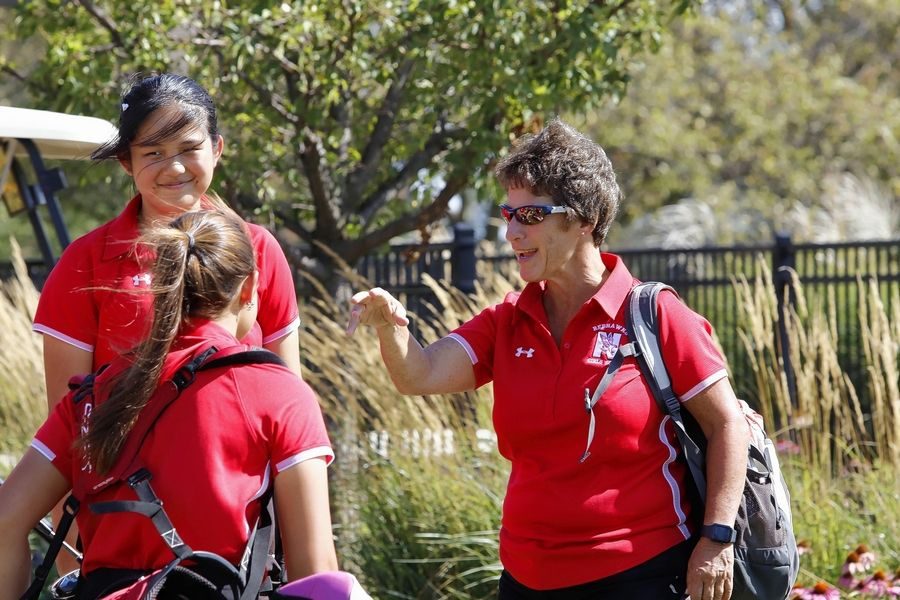 After 26 years of coaching the girls team and one year coaching the boys, Thompson thought that “all good things must come to an end.” The fact that there are six graduating seniors on the team helped her decision, as her retirement would affect fewer players.

“As soon as [current varsity seniors] came in as freshmen, that was kind of the signal,” Thompson said.

Thompson is not only retiring from her coaching position but also her teaching position as well. She teaches social studies classes including AP U.S. history, 20th century European and special topics classes.

“This is the earliest time I can retire,’’ said Thompson. “You have to teach 35 years [to retire]. Add that with golf, it’s a natural break.”

Despite it being her last season, Thompson said she did not do anything differently than in past seasons. Her philosophy has always been to let her players “do their jobs,” and few know their jobs better than the six seniors, four of whom have been four-year varsity letter winners.

“When you have good players… don’t over coach them,” Thompson said. “You are going to guide them, there’s no question about it. But it’s an individual sport.”

However, when a player struggled to find her game, Thompson never hesitated to help.

“One of my teammates, Bella, was struggling with her bunker shots during a match,” said Emma Lim, a graduating senior and reigning Conference Champion. “So the next day during practice, she helped Bella in the fairway bunker at [our home course].”

Sand shots are some of the hardest in golf, as one has to judge the conditions and either hit the sand or the ball first. Thompson would know, as a former NCAA Division 1 recruit.

In fact, ever since her childhood, she had been playing golf with her family in rural Indiana. Her lifelong love for the game motivated, and is still motivating, her to coach.

Thompson believes that the fun of golf lies in its unique levels of competition and the importance of mental toughness.

“You are really competing against yourself first, another opponent, and then truly who you’re competing against is the golf course architect,” Thompson said. “He is placing certain hazards in spots to say ‘I’m going to force you over here’.”

In her last hurrah as coach, Thompson helped the team to a second place finish at sectionals.