To the district: Communication (not censorship) is key 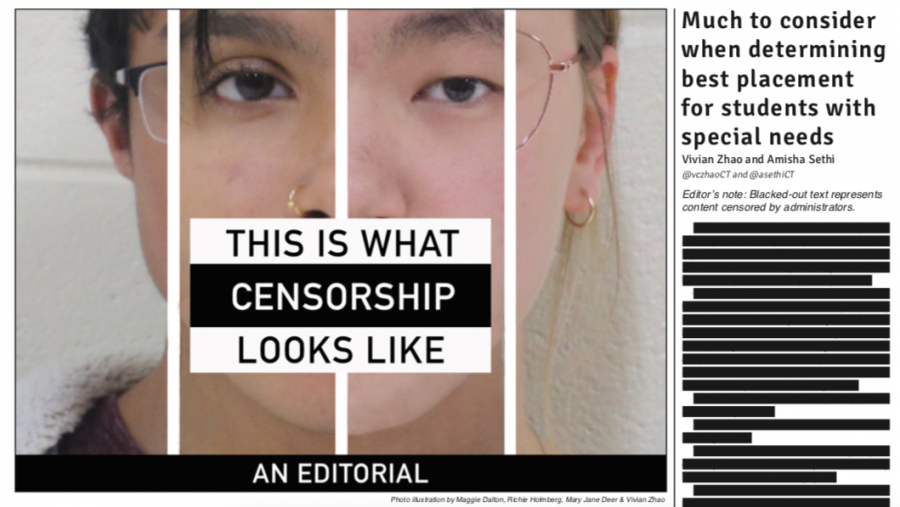 The Oct. 29 print edition of Central Times ran a front-page editorial with this image next to a censored story that inspired the editorial.

Update from the editor-in-chief: After writing the editorial that appears on the front page of the October print edition of Central Times and is reprinted here, the Central Times experienced another round of prior review and prior restraint on Tuesday, Oct. 29, when District 203 administration withheld the printed newspapers from distribution pending a prior review of the issue from the superintendent. After approximately 24 hours of delay, we were given permission to distribute the issue.

From the early stages of an article intending to explain recent disruptions to our school’s learning environment, the district has refused to provide information critical to understanding the complete situation. This was followed by prior review and broad censoring of sections of the article, otherwise known as prior restraint.

Initially, Mondini delayed an interview until Wiesbrook’s meeting with the Central Times, implying that the district expected his visit, centered on prior review, to alter the article’s focus. Wiesbrook encouraged us to pursue a story that he would be “comfortable with running,” despite admitting that the original article’s content qualified as newsworthy and was of legitimate concern to the school.

When asked if there was “bark to his bite,” Wiesbrook insinuated that the Central Times would face disciplinary action if it published the original article, likening the situation to a student defiantly vaping in front of him.

The rejections and lack of responses to interview requests by district and school officials pose an obstacle to quality reporting, which places value on the inclusion of multiple perspectives to help readers better understand a story. The district’s refusal to provide information forced the Central Times to take time-consuming measures such as filing out a FOIA (Freedom of Information Act) request instead.

Resistance to this particular piece of reporting strengthened a week before its intended publication. District officials and Wiesbrook requested a meeting with Central Times adviser Keith Carlson to discuss their concerns about the article, but turned down Editor-in-Chief Vivian Zhao’s offer to attend, despite Zhao’s responsibility for deciding which stories to publish and role as co-author of the article. Concerns about its content and publication should have been directed towards her.

Then, there’s the censorship.

Under Illinois’ 2016 Speech Rights of Student Journalists Act (105 ILCS 80), “a student journalist has the right to exercise freedom of speech and of the press in school-sponsored media, regardless of whether the media is supported financially by the school district or by use of school facilities or produced in conjunction with a class in which the student is enrolled.” There are exceptions to 105 ILCS 80, namely if the content in question is libelous or slanderous, an unwarranted invasion of privacy, a violation of federal or state laws, or an incitement of crime in the school environment. After seeking legal counsel from the Student Press Law Center, we determined that the topic of the story did not violate any of the four exceptions in the law. Any interference by “school officials,” therefore, is in violation of it.

Nor does the Illinois law grant the district authority to evaluate the ethics of an article, which the Central Times accepts sole responsibility for doing.

Upon its meeting with Carlson, the administration decided that Wiesbrook would prior review the article. The Central Times felt obligated to comply because the staff was concerned about potential disciplinary action and the job security of their adviser. Our compliance, however, in no way signifies any agreement with the district.

Prior review, the act of an outside individual or group typically someone with power reading an article prior to its publication, is strongly discouraged in journalism. Mandatory administrative prior review violates the Journalism Education Association’s adviser code of ethics. In this case, it escalated into prior restraint, a method of censorship in which the individual or group will not allow the publication of the article unless the media organization makes “suggested” changes.

Both make the article susceptible to conflicts of interest and can allow outside interests to compromise the quality or alter the intentions of a story. On the day of final deadline, Zhao called Wiesbrook to discuss the article, which Zhao submitted the night before. Approximately 24 percent of the article was censored following Wiesbrook’s directives. What is left of the article is published to the right. We think it is a significantly diminished and compromised version of the story we were trying to tell.

Rather than blocking its publication, the district could have used our reporting to begin a conversation with students. The article, centered around a relevant, complex issue, intended to dispel rumors and aid in discussion.

We’re appreciative of Wiesbrook’s openness to a conversation, though disheartened by the outcome. While Wiesbrook insists this will be a one-time occurrence, we are apprehensive, considering that the administration also prior reviewed the Central Times for nearly a year in 2008.

The Central Times is a student-run newspaper, not the district’s voice. Under this pretense, the decision to censor the article was unjustified. The lack of understanding about our rights increases the likelihood that they will continue to be violated.

Censorship cannot be excused. So accept this invitation: talk to us instead of restraining us. Give us access to you for stories. Explain things instead of hiding them. It’s time for us to have an open conversation.