Support the girls: It’s time for a female Rowdie 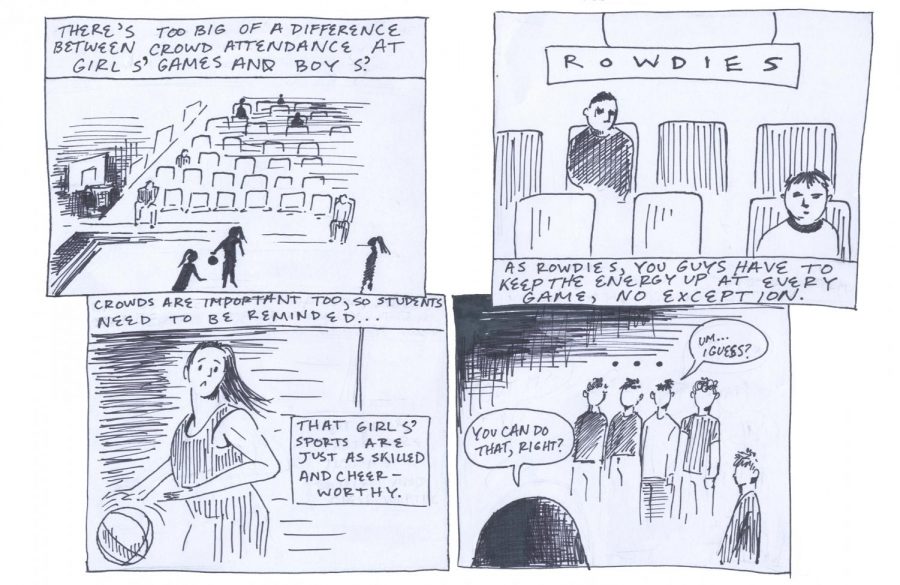 He shoots, yet he doesn’t score. She shoots and she scores! Even if a men’s sports team is significantly less successful than the women, the women’s crowd gets a quarter of the fans the men had. We’ve experienced yet another example of sexism in American sports culture. Even most of the Redhawk Rowdies, whose job is to cheer on sports teams, leave games early because the girl’s game seem too “boring” to watch.

Even though the support for female sports is significantly weaker than that for males on a national level, there are steps we can take to correct this problem here at Central.

When we considered those that attend sporting events, the first people that came to mind were the Redhawk Rowdies, Central’s pep-club, whose purpose is to lead the student section and excite students at sports games. Essentially, they’re here to support our sports teams. Yet most of these males were considerably absent at the highlight crosstown women’s basketball game that took place at Naperville North on Dec. 7.

What’s the point of having a club to support sports when they choose only to support male dominated ones? There are exceptions to this rule, as some Rowdies choose to do what they’re supposed to: support all sports regardless of gender. The majority of our Rowdies, however, choose to support the sports that are entertaining or convenient for them, and most of the time, they don’t include female athletes.

The Rowdies play a key role in determining the attendance at sports games because they make them more fun and provide a sense of unity between Central students, organizing cheers and themes for all the games. To be frank, the Rowdies are the most essential component to making a game fun, regardless of a win or loss.

Although issues lie within the meager interest in female sports from most of the Rowdies, one major issue that contributes to the scant attendance from our Redhawk Rowdies is the lack of a female rowdie. There is no incentive for Rowdies to attend girls sports because there are no girls to push for that support.

If Central wants to take steps to resolve the issue of lack of attendance at women’s sports, gaining a female Rowdie is the best first step for them to take. Women are just as capable as men of leading a crowd, showing school spirit and getting students excited for the games.

Next years Rowdies, it’s time to step up and bring women into the mix to support the other half of Central’s athlete population.