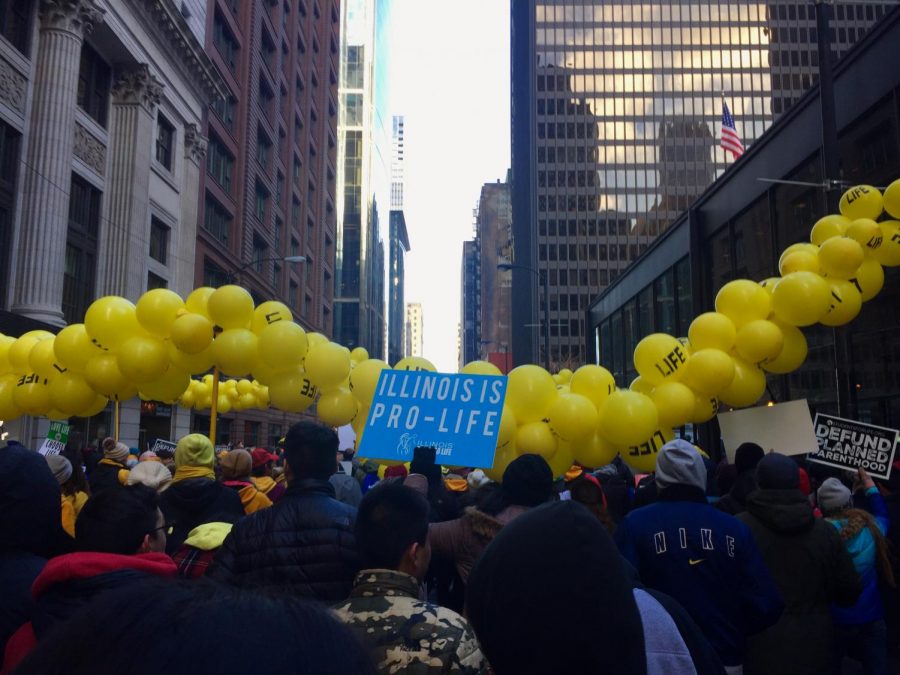 Over 6,000 people gathered in the Federal Plaza in Chicago for the annual March for Life on Jan. 13 to restrict abortion laws, including me. I saw big, bright yellow balloons and people in sweatshirts chanting towards the front of the crowd.

I’m pro-life myself as a Christian and adopted child. My opinion on this issue is deeply personal. I have no information on my birth parents or potential siblings. But, the thing that scares me most, is that I do not know whether my birth mom wanted to keep me or give me up. Unfortunately, I may never know this answer. However, I do know that she loved me enough to give me a chance at life, even though we may be separated. So, with all this said, I cannot deny unborn babies the idea of their right to life which is exactly what my life has been built upon.

It was my first time at an event like this, and I was not sure what to expect or how many people were going to be there. So, I decided to have an open mind and just be in the moment for this new experience.

My decision to go to the March for Life was a spontaneous and last-minute trip that was planned the night before. My friend and fellow staff member, Marina McCormack, invited me and asked if I wanted to go with her. I, honestly, had no idea this event was going on in Chicago. I knew about the march in Washington D.C., but was elated to hear this movement was close by. I wanted to cheer and be around other pro-life community members to make a difference in restricting abortion laws. I jumped on the idea and got someone to cover my shift for work the next day.

We parked at the train station and saw other marchers holding signs on the way to the city. They said, “I love life,” “Illinois is Pro-Life,” “I am the pro-life generation,” and others stated quotes from famous people, such as, Dr. Seuss.

We soon picked some up for ourselves and made our way to the plaza. Hundreds of people were already there and speakers started to give their announcements on the stage at the front of the crowd. People were walking through the crowd with donation buckets for the March for Life organization and making conversation.

There were numerous Catholic and Christian high schools and families there to peacefully protest and lead the march. Some of the younger people are part of the March for Life organization and helped put the event together.

Together we walked nine blocks in the loop holding our signs and cheering for restrictions on abortion laws. I looked around to see everyone smiling and proud to be a part of this movement.

And I was doing the same.

As we rounded the last block and came back to the plaza, I could see the other marchers still making their loop around and was astonished. This was something I have never experienced before, and I was glad to be a part of it. Of course, counter-protesters were there but there was not any drama. They protested in the back and sides of the crowds and held signs, chanting phrases for abortion laws. I don’t believe this seemed like a big deal to everyone, and I think people were excited to be a part of something bigger than themselves.

This march is definitely something I will look forward to next year. The amount of pride and hope you feel for standing up for what you believe in is unimaginable. Being able to participate and be surrounded by thousands of other people that agree with you, is inspiring. So, for anyone who has not marched yet for whatever they believe in, I strongly encourage it. I promise, you won’t regret it.