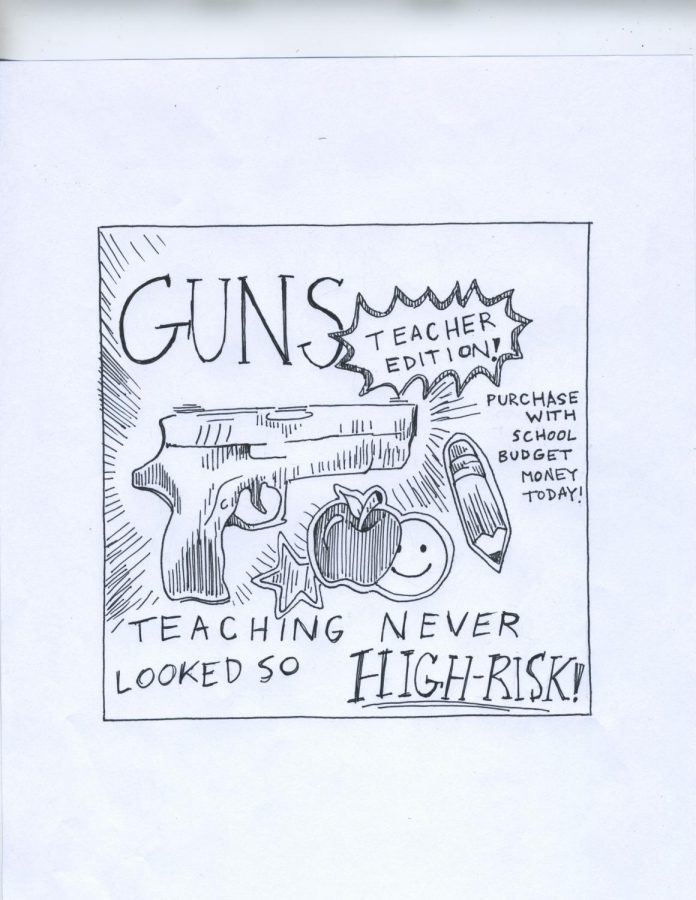 As the summer winds down and teachers prepare to return to their jobs, they line up to receive their laptops along with a new piece of technology: a gun.

“Remember, don’t put stickers on it!” the administration says as they hand teachers their new weaponry.

This hypothetical scenario will not be happening in Naperville District 203, thanks to a vote on Resolution 2 on Nov. 17 by the Illinois Association of School Boards – at least not next year. But across the country, the debate still persists over the effectiveness of arming teachers so they could protect their students if a shooting were to occur.

When the Central Times set out to discuss this, we decided that although we believe teachers should not be armed, certain circumstances such as the lack of a school resource officer and long distances from police stations may limit the amount of protection schools have and in these cases, it might be necessary to arm teachers.

At Central, we have an armed police officer on campus at all times during school hours and the police station is a five minute drive away. While we, and many other schools, are lucky to have these resources, many schools are not.

In these extreme circumstances, it might make sense for a select amount of teachers to possess firearms. There would need to be extended training and background checks, but they can’t let a shooter run rampant and not have anything to take them down.

But those are the only conditions in which we’d advocate for teachers with guns. At Central, we see no reason for any teacher to have one.

Adding more guns into circulation only increases the chances of the wrong person getting ahold of a weapon, in turn increasing the chances of a school shooting. In addition, the amount of money spent on arming teachers could be money better spent elsewhere. For example, installing better preventative measures such as another officer or metal detectors in doorways.

Arming teachers with guns is an unnecessary precaution because of the effective resources our school has available. For this we applaud Naperville District 203’s Board of Education for voting down Resolution 2, which would allow teachers to be armed. We can not keep adding fuel to this issue and need to fix the problem at its roots. Only in certain, extreme circumstances should a teacher be armed. Otherwise, there is no reason to have this conversation.