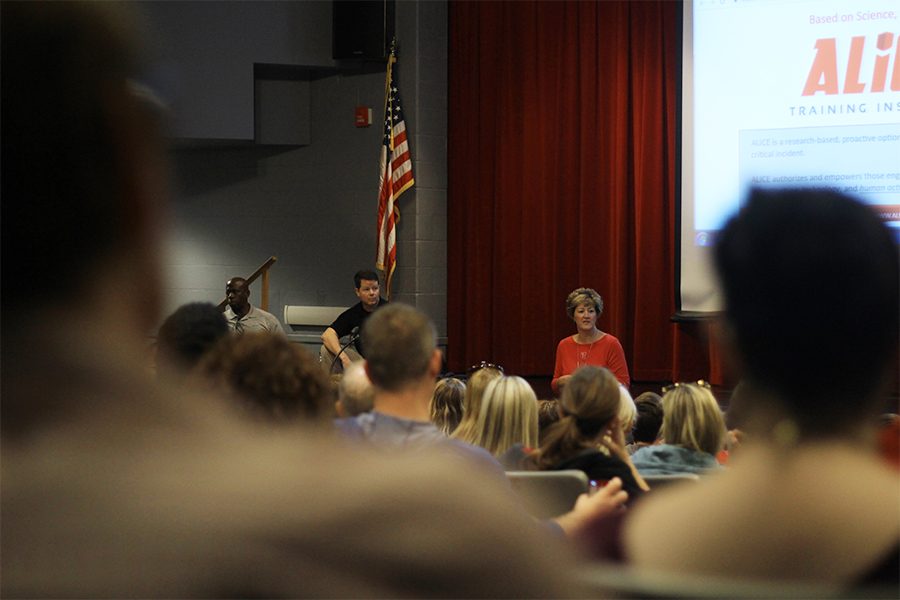 As school shootings increase across America, District 203 has changed its lockdown policies, adopting a new one called ALICE. No longer will locking the doors and turning out the lights be the only option for teachers. No longer will fearfully hiding in classrooms, away from the windows be the only option for students. Instead, ALICE training will give students and staff the power to assess the situation and do what is best for them.

ALICE is an acronym that stands for alert, lockdown, inform, counter and evacuate.

“The shift is really [for] having some flexibility to know what’s going on and make decisions based on that,” Assistant Principal for Operations Carrie McFadden said.

Students will be given ALICE training sometime next semester. School Resource Officer James Tanksley would like students to be trained as soon as possible. However, the district needs to plan its training further so every student is learning the same skills. Even with the ALICE training next semester, Tanksley feels there is still room for improvement in active shooter training.

“I would like for students to have more practice and drills,” Tanksley said. “Just so it becomes something you automatically do.”

In light of the 272 mass shootings in America this year, the federal government issued a recommendation for schools to find better, safer lockdown procedures.

“What they’re finding is in a situation with an active shooter, having 25 kids huddled together in a corner might not be the best way to keep everybody safe,” McFadden said. “If somebody were to get in your classroom it might easily be able to harm multiple kids all at one time.”

“Those are all options,” McFadden said. “They don’t necessarily have to happen in that order, but it’s the idea that if you were to know that the threat was over by the Foods room that maybe the rooms in the second story it might be safer for them to get out. It’s not just sitting in a room waiting to see what happens.”

This new lockdown training will help students and faculty be more prepared in the event of an active shooter.

“You have to adapt,” Tanksley said. “If you can find something better, then do it. [ALICE training] is a way to improve and help more kids survive.”

“The 2013 edition expands the guidance to include multiple options that go beyond lockdown including Run, Hide or Fight,” according to the ALICE Training Institute.  “It also recognizes that staff and students may have to use more than one option and that the decision to do so should be made using their own judgment. ALICE Training protocols are used almost exclusively in all new guidance.”

While there are many different types of lockdown training, the decision to switch to the ALICE program began several years ago in the Naperville Police Department. Since then, a number of schools, businesses and churches have begun teaching ALICE.

“More schools are moving towards this,” McFadden said. “In my opinion, having some options I think is a good thing. And that’s where the inform part is. That you’re letting people in the building know what’s going on[…] It’s making good choices instead of just sitting there.”

“I think it has some good insights in there,” said Mike Jarvis,  AP Environmental Science teacher. “I think it’s more realistic than just hiding all the time as your only defense.”

The overall goal of ALICE training is to make sure students are prepared in the event of an active shooter.

“I hope that people feel empowered to the fact that they don’t just have to sit and wait,” McFadden said. “I hope we never have to use it quite honestly, but knowing that we have some options is good.”

For more information on ALICE Training students can visit alicetraining.com.