Unrealistic to try and achieve all three aspects of the triangle 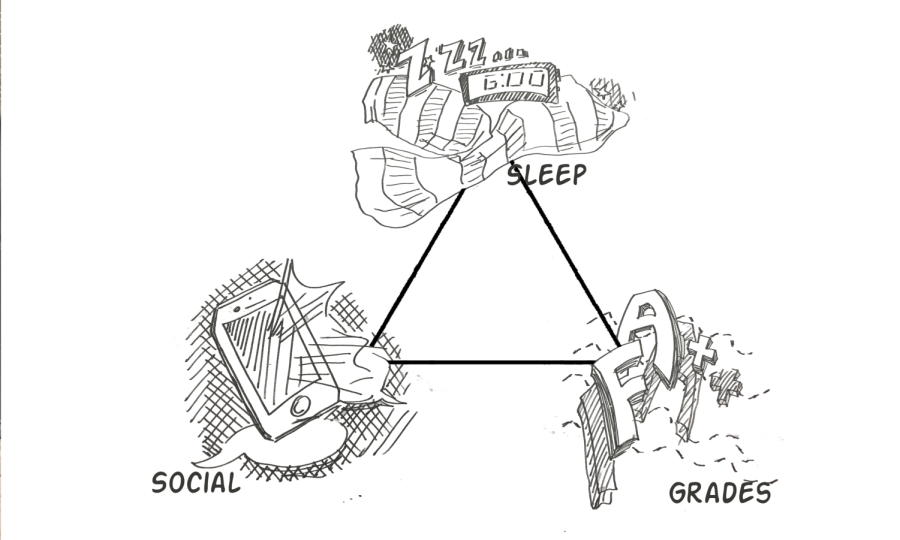 Sleep. Grades. Social Life. We’ve all seen the triangle at some point or another, and through our own experiences, it’s clear that every high schooler strives to achieve a perfect balance of the three. In a perfect world, you would have it all figured out and you’d live a stress-free life, but this is reality, and in reality, you often have to pick two of the three.

Of course, it would be great if you could maintain a 4.0 GPA, get eight hours of sleep each night and hang out with your friends a few times each week, but there are only 24 hours in a day and you can only spread yourself so thin. Especially because we’re at Naperville Central. And in between after-school sports and activities, some honors and AP classes and weekend plans, prioritizing is necessary. And because every teenager has different priorities, there is no set standard
for how teenagers live their lives.

Often, though, students end up staying up extremely late to finish homework and study. Because we’re overcommitted, oftentimes it’s sleep that we end up having to sacrifice. On average, teenagers get seven hours of sleep, while the recommended amount is somewhere between eight to 10 hours, and I’ve seen this reflected in my life as well.

There have been too many times to count where I or a friend has spent the entire night studying for a major test. I fluctuate between combination pairs of the three things. Some weeks I hang out with my friends and get tons of sleep.

Other weeks sleep does not exist and there’s a constant cycle of social interaction and study. On rare occasions do I only focus on one of the three things at a time (that’s an extreme that is unhealthy for anyone). I recognize that the social-emotional wellness triangle is meant to represent an ideally healthy lifestyle, and it would be fantastic if every student could find a balance between each vertex, but that just isn’t realistic when students’ priorities are constantly shifting.