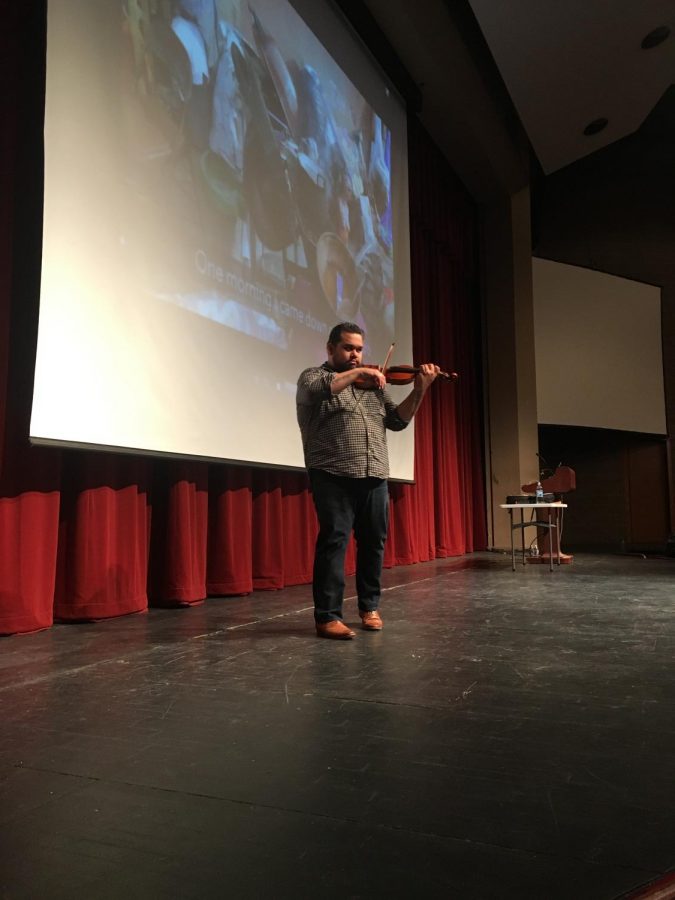 Classical musician and TED speaker Vijay Gupta shared not only the accomplishments of his nonprofit organization, Street Symphony, but also words of wisdom with District 203 student musicians and educators on Feb. 28 in the Naperville Central auditorium.

Gupta spoke from many different perspectives: as a member of the Los Angeles Philharmonic, as the son of South Asian immigrants and as a founder of a non-profit organization.

However, before he began speaking about his own life, he shared a piece of music on his violin that he had improvised and dedicated to the victims of the recent Parkland school shooting.

He shared stories and related his experiences in Skid Row, an area of downtown Los Angeles known for being a crowded hub of homeless people.

“An artist is a communicator and an artist is an instigator,” Gupta said. “ It’s as much our job to heal and inspire as it is to provoke and disrupt. One of the patterns that I have dedicated my life to disrupting is that great art only happens in elite concert halls.”

Gupta auditioned for and was accepted into the Los Angeles Philharmonic at the age of 19, the youngest person to ever receive a position. It was after moving to Los Angeles that Gupta became acquainted with Skid Row and started his non-profit organization.

“It was during this time when I was getting to know this new city and this new job that I saw Skid Row for the first time and honestly, I felt like a hypocrite,” Gupta said.  “When I was studying science I had this dream of becoming the doctor without borders and instead here I was in LA playing for this very elite audience. And then I saw Skid Row and I thought, ‘Man, if I ever wanted to be that kind of doctor I didn’t have to go to Haiti or Ethiopia or India. There were major public health works needed in Downtown Los Angeles. Why was I a musician? How on Earth could I heal anybody in my community as an artist?’”

These questions prompted Gupta to actively bring new experiences and opportunities to the Skid Row community through his organization Street Symphony.

Gupta continued to share the works the non-profit has done, from assisting people who are or at one time were homeless with ways to express and connect with their emotions musically to hosting concerts that don’t require the purchase of an expensive ticket.

Band director DJ Alstad shared his appreciation for Gupta’s overall message to students that music can make a difference in their lives.

“It is paramount that our students are involved in the arts,” Alstad said. “It makes them human and I think Mr. Gupta brought that message.”

Senior Emily Gray, who plans to major in music education in college, enjoyed hearing and felt encouraged by Gupta’s message.

“I think [Gupta] made a good point that it’s important to be very diverse and learn,” Gray said. “It’s reassuring as a future music major that there will be other opportunities that I can go for while still being musical.”

Junior Jack Reicherts felt inspired by not only Gupta’s musical journey but also his resilience and inspiring deliverance.

“[Gupta] did a great job of tailoring his speech to students,” Reicherts said. “He pointed out that not only is music a viable career path but it’s a meaningful career path and it’s not just, ‘Oh I’m going to be a starving artist,’ but that you can be an artist and make a difference.”