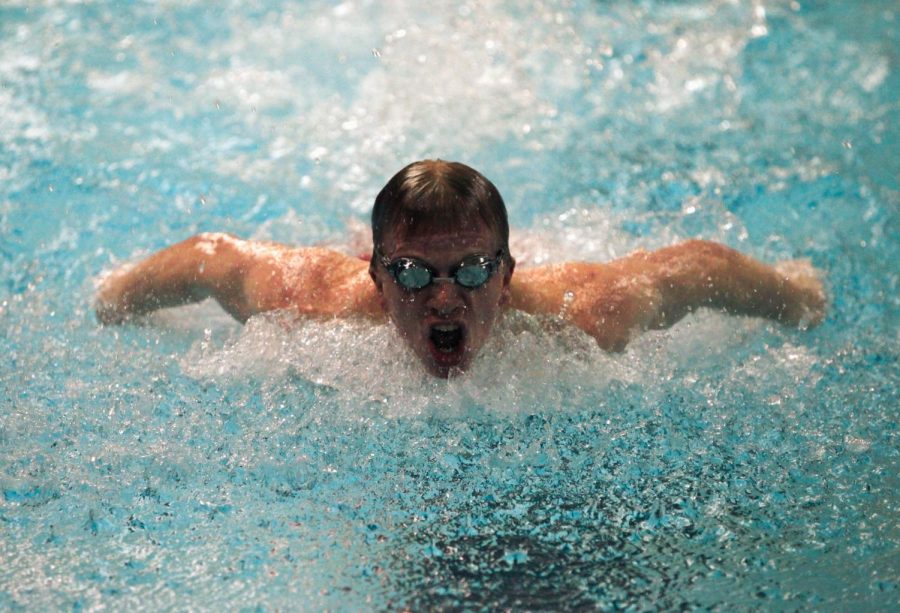 Junior Jonah Klein-Collins completes the fly lap of the 200 IM at the home meet versus Nequa Valley on Dec. 12.

Junior Matt King jumps into the shallow end of the swimming pool, tensing as the cold hits him, but quickly begins his warmups, joining the rest of his teammates on the varsity boys swimming team.

“I tried a ton of sports in the past and when I came to swimming a few years ago, it just kind of stuck with me,” King said. “I’ve just been going with it ever since.”

King and his teammates spend hours in the Naperville Central aquatic center, usually practicing both in the morning and after school. However, as junior varsity member Ricky Pipala details, this year’s schedule is better than before.

“Last year for most Wednesday practices, we would not have practices in the morning,” Pipala said. “ But now, with late arrival being every single Wednesday, we never have practice on Wednesdays, and […] I feel it’s been a really large factor for us to help get a good head start on the season.”

Despite the change to the schedule, swimmers still spend a large chunk of most days in the pool, where they encounter a problem.

“Sweat and stuff, when it comes off your body and when it goes into the water, it kind of creates like a little, I want to say, gas cloud, that’s kind of what it is, but right above the water, and that makes it hard to breathe, kind of irritates your lungs and throat a little bit,” Pipala said.

Pipala believes that a better air ventilation system could take care of this problem.

“Our [ventilation] system, not only is it outdated, but I believe is also not doing 100 percent of its job,” he said. “It’s very common for us to walk into the pool and […] the coughing gets so bad that to keep the air [ventilation] going, we have to open the door from the side of the pool.”

This causes a different issue.

“If you do that in the middle of winter, when it’s absolutely freezing out, that lets all the cold air in and then we become freezing,” Pipala said. “Last year especially, the coaches would open the door up for five minutes, close the door for five minutes and we’d go back and forth between freezing and coughing.”

The Centers for Disease Control and Prevention’s (CDC) Model Aquatic Health Code states that “indoor aquatic facilities’ ventilation system design shall provide a complete building purge method that will allow for complete exhaust of the building’s air volume and replacement with fresh air.”

If coaches are opening doors due to poor ventilation, then the air flow is insufficient.

When asked about pool maintenance, coach Mike Adams declined to comment, citing his lack of knowledge as the reason. He did not provide an explanation as to why the aquatic center doors are sometimes opened.

However, head of maintenance Gary Gebauer confirmed that the doors were opened to increase air flow throughout the aquatic center.

“Oftentimes, when they swim, they will open the doors too, and if there is combined chlorine fumes that come out of the pool, a lot of those blow right out the door,” Gebauer said. “When the swimmers are in there quite often, you’ll see the door is wide open.”

Gebauer believes that the ventilation system in the pool is the best that it can be without spending excessive amounts of money for minor tweaks that may or may not work.

“Are there other things that can be done?” he said. “Yeah, but they might be $100,000 to do, but it may not be worth that much […] You may fix one thing and create another [problem]. You never know until you’ve spent all the money.”

Chlorine was once used to make gas known to cause a painful, prolonged death, and is now used most popularly as a disinfectant, both in swimming pools and for drinking water, as well as bleach in the clothing and paper industries.

But it technically isn’t chlorine that causes the irritation and difficulty in breathing for swimmers.

According to the CDC, when chlorine “binds to the body waste swimmers bring into pools (for example, sweat and urine) it can form chemicals called chloramines.”

Due to their density, chloramines settle on water, forming a toxic cloud of chemicals, that if inhaled, can cause health problems in swimmers.

The maintenance department is aware of this.

“We air out the building at different times because the chloramines hang over the water, but we’re able to keep the total chlorine level very low compared to what we used to be able to do, so it’s much better than what it [has] ever been,” Gebauer said.

“We actually keep it down to 0.2 [ppm],” Gebauer said. “Sometimes even lower than that. […] With it being down to 0.2 [ppm] on the negative reading, it’s so minor they probably wouldn’t even have to open the door.”

No extensive study has been done on the effects of chloramines on swimmers.

Yet there are countless swimmers suffering from overexposure to chloramines, ranging from Olympic swimmer Caeleb Dressel, who was rushed to the emergency room after the 2013 Junior Nationals preliminaries in Greensboro N.C. when he found that he couldn’t breathe, to Masters swimmer Audrey Eldridge, who can’t swim without an inhaler nearby.

For swimmers at Central, the air quality varies from day to day.

“It depends on the temperature and weather outside,” girls varsity swimmer and senior Emma Wagner said. “It always feels like the chlorine, like the bad air, is right on top of the water because if you’re just walking on the pool deck, it’s easier to breathe than when you’re actually in the water.”

Wagner’s teammate, senior Audrey Coffey, believes that the air quality of Central’s pool is better than others that she’s swam at.

“Personally, I’ve never had that many issues with Naperville Central,” Coffey said. “I like to say that I’ve developed an iron lung because I swim in a worse pool […At Central] I swim in lane eight, which is right by that door [the coaches open]. That definitely does help, to crack open the door.”

Like Coffey, King added that he doesn’t think that there are any major problems with ventilation at Central.

“In the past, it was awful, but I think it just depends from person to person,” he said. “I had surgery to fix stuff in my sinuses, and I never had a problem since.”

For Coffey, poor air quality just comes with the sport.

“Swimming has a lot of air issues, you know, because you have a ton of chlorine in the pool and sometimes that gets up into the air,” she said.

Ultimately, the proper monitoring of both the water and air in any pool area is part of the daily responsibilities of those who program and run activities there. To that end, Pipala added that Adams himself had addressed problems with the school’s ventilation system.

“We started the season and noticed that usually it doesn’t get bad until later, but he did say that the air [ventilation] is not as good as it should be,” Pipala said. “The only information that I had was provided for by the coach, that he’s communicating with maintenance, and [is trying] to get it as best as possible.”

Gebauer did not mention anything about communication between the coaches and maintenance during his interview.

“I feel like if you go to other pools, Central’s definitely on the lower end,” Pipala said. “At Metea, they [added] brand new blocks two years ago that are really nice and we are still using old blocks from I don’t know how many years ago.”

Gebauer does believe that District 203 is committed to maintaining Central’s aquatic center.

“It’s improved from what it was years ago,” Gebaur said. “As far as comparing it to another school, I have no idea what they have at other schools. [The] district’s been trying to do everything they can to maintain the best air quality that we can.”