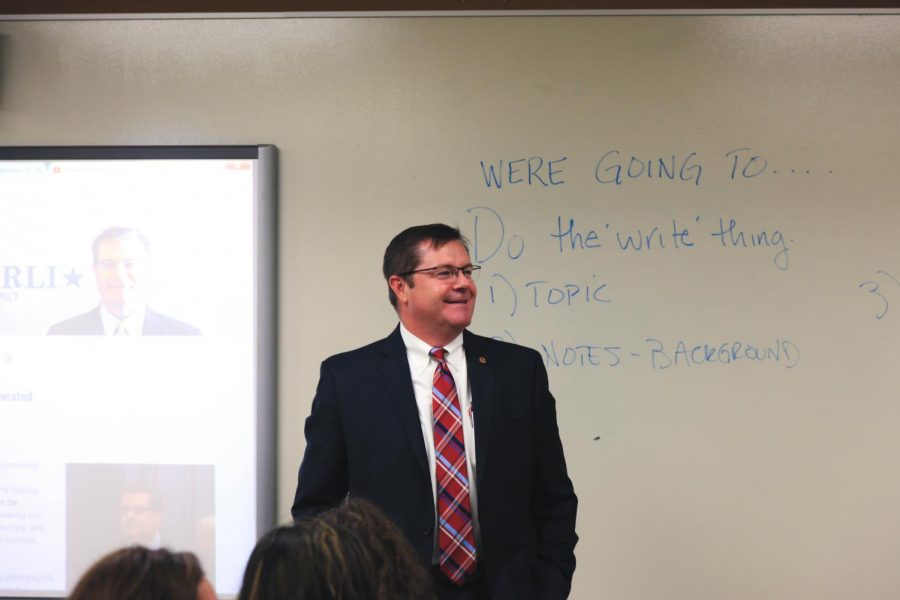 U.S. Representative Grant Wehrli visited the AP U.S. Government and Politics classes on Wednesday Nov. 1 and participated in an open question and answer session with students. He discussed a wide variety of topics from Illinois debt to sexual harassment in the workplace.

“It’s an honor to serve the city I love,” Wehrli said.

Wehrli spent most of the speech discussing Illinois’ debt.

“We are beyond broke,” Wehrli said.  “Our unpaid bills, sitting on the comptroller’s desk are over $16 billion. [These are for] things like food to prisons, keeping the lights on in the capital, state employee health insurance […] The true root of the problem is we were spending $37 billion on revenues of $32 billion.”

He also spoke of his accomplishment repealing the beverage tax law.

“I’m opposed to a beverage tax,” Wehrli said.  “Who drinks pop the most?  Teenagers and people with less income, people in poverty.  If I’m making 100,00 dollars a year and someone else is making 10,000 in chicago, who’s making more?  It’s regressive. They’re making more than their fair share.  We came in on opposition to this tax and now it’s been repealed.  Mayor Bloomberg said it was all about the health.  It wasn’t about the health.  It was about bailing out the government of Cook County… I’m glad to say it’s now off the books.”

In addition, Wehrli discussed how he, in collaboration with other representatives, is working to stop sexual harassment in the workplace.

“There was a letter written a week ago by members of staff that work in Springfield,” Wehrli said. “The letter was very damning to the culture and environment when it comes to that topic.  Yesterday, Speaker Madigan introduced a bill to the Personal and Pensions Committee and it’s about not only sexual harassment training but also a better way to report and follow up with these claims,” Wehrli said.

Wehrli ended the discussion by talking  about his desire for a ten year financial plan for the Illinois government, in opposition with Democrats.

“We are grossly overspending and my colleagues across the aisle say spend more,” Wehrli said. “We have to do things better that the state level.”

Michael Bochenski, an American government and politics teacher, organized the visit to his sixth and seventh period classes while Wehrli was already in the building to be the “principal of the day.” Bochenski hopes that the students were able to take advantage of the time to ask Wehrli questions about anything local, state or federal.

“What an unbelievable opportunity here we are doing this assignment, and here’s an actual state rep we can talk to about you name it […] here he is, you can ask him a question right now, he is standing right in front of you,” Bochenski said.